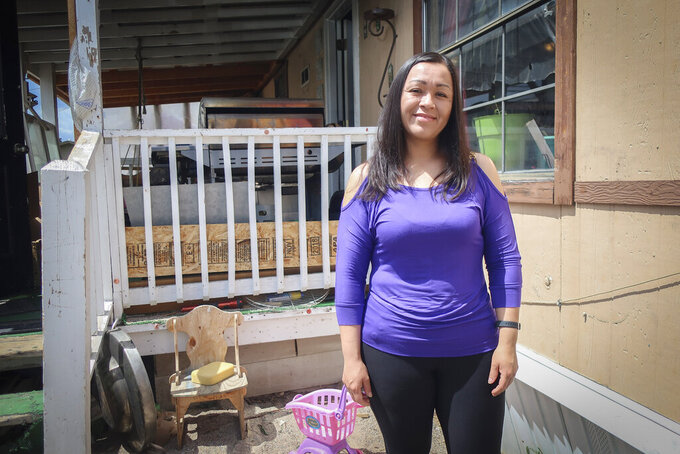 Ana Dominguez stands outside her mobile home near Leadville, Colo., on Thursday, July 16, 2020. The coronavirus pandemic has virtually shut down the region's tourism industry, which provides jobs for Dominguez and hundreds of other immigrants from Mexico and other Latin American countries (Nathaniel Minor/Colorado Public Radio via AP)

LEADVILLE, Colo. (AP) — When she left Mexico for a single-wide tan-colored mobile home, with cordwood stacked outside the front door and a handful of toys strewn about a tiny front yard, just outside of Leadville, Colorado, Ana Dominguez thought she’d be there for just two years.

“The situation changed,” she said through an interpreter. “I met my husband and now we have a family.”

They’ve raised four children there since, one of a few hundred families in three mobile home parks near Lake County’s only town, most of them immigrants from Mexico and Latin America like Dominguez. She’s occasionally worked at restaurants over the years, while her husband worked as a carpenter an hour northwest in the Vail Valley. He made about $45,000 a year before the pandemic, she said.

Like so many Coloradans, the coronavirus pandemic upended their lives when it hit in early March. Her husband lost work, and they nearly ran out of money.

“At one point I did fear for my family and losing our housing,” she said.

Leadville, along with the rest of Colorado’s tourist-reliant mountain communities, was hit hard by the closure of ski resorts and restrictions on travel within the state, which kept recreationists away. Colorado Public Radio reports that because of long-standing economic inequities rooted in immigration status, that pain has been especially acute in the nearby mobile home parks, home to many of the room cleaners, restaurant cooks, and construction workers who advocates say make the tourism industry in neighboring Summit and Eagle counties possible.

Many of the mobile home parks’ undocumented immigrants are not eligible for key state and federal relief programs like food stamps and unemployment. So local governments and nonprofits scraped together money and food donations to keep those families afloat. But advocates say residents need more than bags of food and help with bills to withstand future economic shocks, but major policy changes like an overhaul of federal immigration law and local reforms.

It was still snowing when Leadville shut down.

Stephanie Cole, executive director of Full Circle, a nonprofit that serves the area’s immigrant community, said her staff surveyed their clients and were shocked by how close to the edge many were already living. Many were already hundreds or thousands of dollars behind on their rent and utility bills.

“People were already struggling before COVID hit,” Cole said. “And then COVID hit and everything got even more difficult.”

Xcel Energy announced in March it wouldn’t disconnect service to any residential customers for lack of payment. But while that utility services Leadville itself, residents in the mobile home communities rely on propane — an expense many, including Dominguez, quickly cut back on when they lost their income.

“I was pretty blown away by how many people were living in the manufactured housing communities without gas,” Cole said. “People couldn’t pay those bills. So they were literally living in houses without heat.”

Full Circle and other nonprofits and local governments formed a committee and raised more than $230,000 to help pay immigrant families’ bills. About $2,000 helped Dominguez catch up.

“If it wasn’t for Full Circle, I would have probably lost my home,” she said.

Mateo Lozano, mountain regional organizer for the Colorado Immigrant Rights Coalition, said such non-traditional funds are necessary, because undocumented immigrants aren’t eligible for most government benefits. A new Latino-focused organization just started one in Glenwood Springs and the city of Denver gave $750,000 to another.

“If it’s connected to the state at all, it’s not available to them,” Lozano said.

Cole said Leadville’s is on pace to run out of money in the next four weeks. She’s trying to raise more, but said the payments amount to Band-Aids on deeper, structural problems.

Lozano said comprehensive immigration reform is “ultimately the answer” to persistent inequalities, though experts at the Brookings Institution say Congress hasn’t passed a major bill on the subject since 1986 because it’s “become intricately bound up with issues of identity, prone to the politics of tribalism and of less interest to the business community.”

The Mountain View mobile home park just outside of Leadville, Colorado, houses more than a hundred families -- many of whom are Hispanic immigrants.

As it is, Cole said Leadville’s immigrant community is ill-prepared for any economic downturn — let alone a collapse like the pandemic. Mobile park residents own their homes but not the land underneath it. So they don’t build equity like other homeowners would. It’s difficult for undocumented immigrants to get home loans. Meanwhile, many in the parks are stretched thin already, commuting long distances to ski industry towns like Vail and Breckenridge.

“Those industries could not exist without immigrants,” Cole said. “All of the low-paying high-demand jobs that keep those industries running and so profitable, like all of that is on the backs of our immigrant community.”

This dynamic has existed for decades. The North American Free Trade Agreement radically changed Mexico’s economy and led to workers leaving for opportunities in the U.S. As Leadville and other Colorado mountain communities transitioned from mining to recreation-based economies, the demand for low-wage workers increased.

“Consequently, over a period of less than 15 years, Leadville morphed from a primarily native-born, regionally dominant town of residents working within the county to a half immigrant, half non-immigrant population of predominantly low-wage workers commuting at least 40 minutes,” Nancy Hiemstra, an expert on immigration at Stony Brook University who lived in Leadville in the early 2000s, wrote in a 2010 journal article.

But the pandemic and protests over racism have started a conversation about addressing long-standing divisions in Leadville.

Christian Luna is a Leadville native and the son of Mexican immigrants. “I understand I have an immense privilege that a lot of other immigrants just don’t, and that I should use that,” he said.

“It’s tough because you see a lot of people who try their hardest to, make it out if you will, or pull them up by their bootstraps as the saying goes,” said Luna, a youth engagement specialist at Full Circle. “But they literally can’t because of the systematic barriers that are put in front of them.”

Luna’s parents have legal status, and he grew up speaking English so he’s comfortable sticking his neck out. Still, he remembers being punished at school for speaking Spanish. He’s part of a group called “One Leadville” pushing local political and law enforcement leaders to better meet the needs of the immigrant community.

“I understand I have an immense privilege that a lot of other immigrants just don’t, and that I should use that,” he said.

Leadville Mayor Greg Labbe said he’s doing his best to serve the immigrant community, even though they’re technically outside of city limits. The city of Leadville has given $20,000 to the fund that has paid immigrants’ bills.

Other disparities — even seemingly simple projects like a bike path to the trailer parks — are outside of the city’s purview, Labbe said.

For her part, Ana Dominguez said she’d love to leave the mobile home park and move into Leadville proper. But booming home prices have pushed that dream further out of reach, as transplants from the Front Range and elsewhere have driven up home values.

Her more pressing concern now is her husband’s employment. He’s back at work, but she’s worried the volatile economy could change that at any time.