At least half of New Mexico students take in-person classes 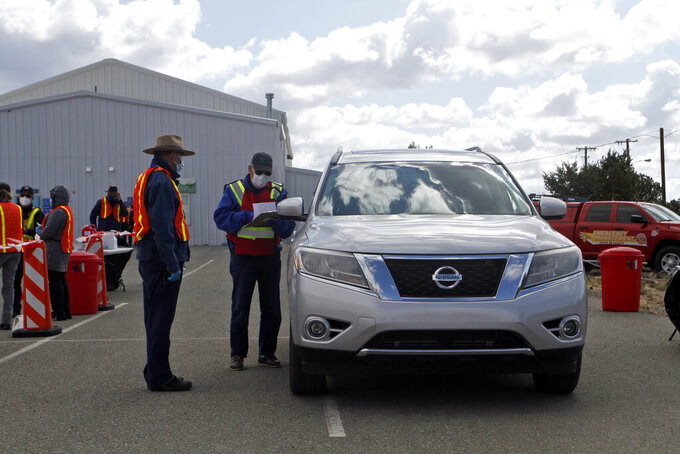 A health workers check paperwork ahead of a Moderna COVID-19 vaccine drive outside of the County Fairgrounds on Friday, April 23, 2021, in Santa Fe, N.M. (AP Photo/Cedar Attanasio)

SANTA FE, N.M. (AP) — At least half of New Mexico’s K-12 students ventured into a classroom for at least one day last week, as vaccinations become easier to get for people 16 and older, state officials said.

About 160,500 students were recorded as attending school in person, or about half of the state’s total K-12 enrollment, according to state data made public Wednesday. With only 80% of districts and charters reporting, the number was probably higher.

State education officials asked school districts and charters to reopen to full-time, in-person learning on April 5th. A small number have not reopened due to tribal health orders.

“As expected, New Mexico is now offering in-person instruction to every student who wants it in all but a handful of cases,” Education Secretary Ryan Stewart said Thursday. “New Mexico has 840 individual schools, and only 17 have had to return temporarily to remote instruction."

Stewart called it a good sign that safety protocols are working as intended, and in-person learning can proceed with only minimal and temporary disruptions.

In addition, New Mexico has lifted pandemic-based restrictions on attendance at houses of worship in response to a U.S. Supreme Court decision that prevents states from enforcing capacity limits on churches that are more restrictive than limits on other entities, such as factories or schools.

Stewart, meanwhile, welcomed a testing waiver from the U.S. Department of Education exempting the state from a requirement to test 95% of students. Instead, state officials intend to test a representative sample of students who opt-in to testing.

In-person attendance was lower at high schools in Albuquerque compared with middle and elementary schools. It ranged from 18% at West Mesa High School to 87% at Early College Academy. Neither high school responded to requests for comment.

The attendance rates were highest at Albuquerque elementary schools, with as many as 98% of students returning to classrooms at some schools.

About 95% of students were back in seats at S.Y. Jackson Elementary School in Albuquerque, where internet woes were minimal during the year of remote learning, and groups of students had six hours of simultaneous access each day to the same teacher.

“So it was just a part of their everyday routine going to school," said principal Jack Vermillion, who had been expecting about 80% of his students to return. “I think that was a huge part of it.”

The high in-person attendance rate was made possible by a change in Centers for Disease Control guidance calling for three feet (0.9 meters) of distance between students instead of six feet (1.8 meters), Vermillion said. While classroom furniture had to be shuffled, the change made it possible to fit the entire student population into the same school, he said.

Some students have remained in remote learning due as a health precaution.

“We actually have grandparents raising kids,” Vermillion said. “There’s some people — and my wife’s one of them — who were still kind of in PTSD from the whole thing. And they’re still just a little cautious about, you know, sending their kids back into an environment where there’s any kind of a risk at all.”

The return to in-person learning followed a campaign to vaccinate school workers in March. Over 85% of pre-K through college educators who signed up have received one dose of vaccine and 72% are fully vaccinated.

Among other residents, minors can only get the Pfizer vaccine for now and need a guardian to sign a permission form.

“What we’re hoping to do is to work with local schools and school districts to reach out to those 16- and 17-year-olds before they go off for the summer to do various things,” Department of Health Secretary Dr. Tracie Collins said. “It’s important that we work with their parents.”