Lebanese are gripped by worry as economic meltdown speeds up 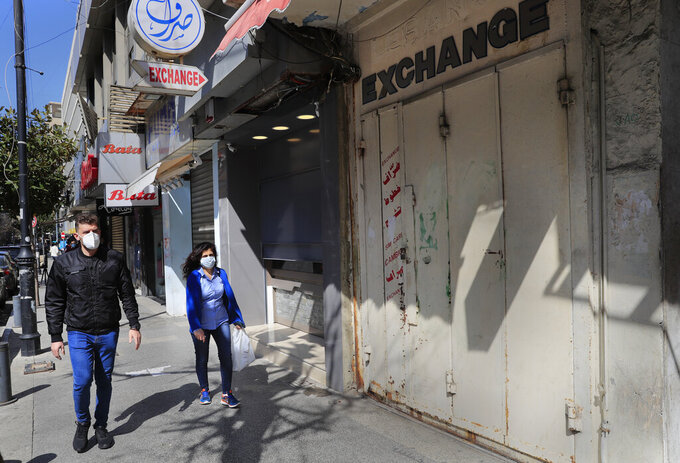 People pass next of an exchange shop which seen close amid a crackdown on some exchange shops by authorities around the country that the blame for inciting the crisis, at Beirut's commercial Hamra Street, in Beirut, Lebanon, Tuesday, March 16, 2021. More than half the population now lives in poverty, while an intractable political crisis heralds further collapse and Lebanese are gripped by fear for the future. (AP Photo/Hussein Malla)

BEIRUT (AP) — Shops closing, companies going bankrupt and pharmacies with shelves emptying — in Lebanon these days, fistfights erupt in supermarkets as shoppers scramble to get to subsidized powdered milk, rice and cooking oil.

Like almost every other Lebanese, Nisrine Taha’s life has been turned upside down in the past year under the weight of the country’s crushing economic crisis. Anxiety for the future is eating at her.

Five months ago, she was laid off from her job at the real estate company where she had worked for years. Her daughter, who is 21, cannot find work, forcing the family to rely on her husband’s monthly salary which has lost 90% of its value because of the collapse of the national currency.

The family hasn’t been able to pay rent for seven months, and Taha worries their landlord's patience won't last forever. As the price of meat and chicken soared beyond their means, they changed their diet.

“Everything is very expensive," she said.

Taha’s family is among hundreds of thousands of lower income and middle class Lebanese who have been plunged into sudden poverty by the crisis that started in late 2019 — a culmination of decades of corruption by a greedy political class that pillaged nearly every sector of the economy.

The Lebanese pound has lost more than 25% in value over the past weeks alone. Inflation and prices of basic goods have skyrocketed in a country that imports more than 80% of its basic goods. Purchasing power of salaries has dramatically declined and savings have evaporated — all on top of the coronavirus pandemic and a massive explosion last August at Beirut's port that damaged parts of the capital.

More than half the population now lives in poverty, according to the World Bank, while an intractable political crisis heralds further collapse.

Alia Moubayed, managing director at Jefferies, a diversified financial services company, said the “sharp contraction in growth, coupled with hyperinflation and devaluation” has pushed more people into precarious employment, raised unemployment levels and brought more than 50% of the population below the poverty line, compared to an estimated third in 2018.

Lebanon has been without a government since the last one resigned in August, with top politicians unwilling to compromise over the formation of a new Cabinet that could forge a path toward reforms and recovery. Street violence and sectarian tensions are on the rise.

“People are dying, and no one cares!” said Taha as she visited a cousin who owns a perfume shop in Beirut’s commercial Hamra Street. Both wore masks to prevent the spread of the coronavirus.

Once a famous shopping district, known for its boutiques, bustling cafes and theaters, Hamra Street has changed amid the pandemic. On a recent day, many shops were closed, some because of lockdown measures, others permanently because of the economic crisis. Merchants in those still open complain they are selling almost nothing.

Beggars solicited passers-by for money. A woman and her child sat on the pavement next to a drawing on a wall with the words: ” We are all beggars.”

“It cannot get worse,” said Ibrahim Simmo, 59, who manages a clothes shop. Sales have dropped 90%, compared to previous years. He couldn't sell his winter stock during the nearly two-month-long virus lockdown earlier their year, and now the currency crash is making things worse.

Ibrahim Farshoukh, 28, said he barely pays the rent for his shop where he sells hand-made leather bracelets and bags. Sometimes his wife stays behind while he takes to the streets, trying to sell bracelets to passers-by. “The situation is unbearable,” he added.

The vast majority of the population gets paid in Lebanese pounds, meaning their incomes decline further while prices shoot up and pensions evaporate. The crisis has also depleted foreign reserves, prompting stark warnings the Central Bank can no longer finance subsidies of some basic commodities, including fuel.

Videos on social media show fistfights in supermarkets as shoppers try to get to subsidized products such as cooking oil or powdered milk. In one video, armed members of one of Lebanon’s intelligence agencies check ID cards inside a supermarket before handing over a bag of subsidized rice.

People who once lived comfortably are now unable to pay school fees and insurance premiums, or even eat well.

"I don’t remember the last time we ate meat. I cannot afford it,” said Taha, whose husband is an airport maintenance employee. The family’s diet now mainly consists of lentils, rice, and bulgur, she said.

The currency collapse has forced some grocery shops, pharmacies and other businesses to temporarily shut down, as officials warn of growing food insecurity.

Nabil Fahd, head of the supermarket owners’ association, told the local MTV station that people are hoarding goods, which stores can no longer restock — once something is sold out, storeowners have to pay more in Lebanese pounds for new supplies. We are “in a very, very serious crisis,” he said.

The price of bread, the country’s main staple, was raised twice over the past year — and then, earlier this month, bakers reduced the weight of a pack of bread, without changing the price.

Assem Shoueib quit his job at a leading newspaper in Beirut in 2000 and moved with his family to France, where he opened a Lebanese restaurant near Paris. Walking through Hamra Street on a recent visit back, the 59-year-old said he made the right decision.

“It was clear the country was heading toward collapse,” he said.