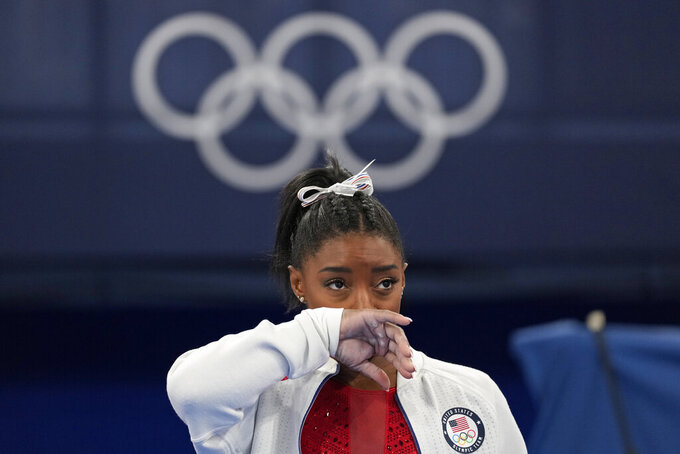 TOKYO (AP) — Katie Ledecky got her first gold medal of these Olympics, while Simone Biles pulled out of another event she came into the Games favored to win.

Ledecky bounced back from losses in her first two events in Tokyo to win the inaugural 1,500-meter freestyle for women by more than 4 seconds on Wednesday.

The victory came about after Ledecky finished fifth in the 200-meter freestyle for her worst finish ever at an Olympics. Ledecky came into the Games with five gold medals but finished second to Australia's Ariarne Titmus in the 400 free and then failed to medal in the 200 that Titmus also won.

“I think people maybe feel bad for me that I’m not winning everything and whatever, but I want people to be more concerned about other things going on in the world, people that are truly suffering,” Ledecky said. “I’m just proud to bring home a gold medal to Team USA.”

Biles, the American gymnastics superstar, withdrew from Thursday’s all-around competition to focus on her mental well-being.

USA Gymnastics said in a statement that the 24-year-old is opting to not compete. The decision comes a day after Biles removed herself from the team final following one rotation because she felt she wasn’t mentally ready.

The organization said Biles will be evaluated daily before deciding if she will participate in next week’s individual events. Biles qualified for the finals on all four apparatuses, something she didn’t even do during her five-medal haul in Rio de Janeiro in 2016.

Jade Carey, who finished ninth in qualifying, will take Biles’ place in the all-around.

Hashimoto’s all-around total of 88.465 points included a 14.933 on high bar. That was good enough for him to surge past Xiao and into the top spot. The gold is the third straight Olympic title for the Japanese gymnast. Kohei Uchimura won in 2012 and 2016.

The U.S. team of Stefanie Dolson, Allisha Gray, Kelsey Plum and Jackie Young have won the first women’s gold medal in the new Olympic sport of 3-on-3 basketball.

Plum scored all five of her points early to help the Americans take the lead, and they held on for an 18-15 win over the team representing the Russian Olympic Committee.

Latvia beat Russia for the gold in the men’s event.

Britain has won the men’s 4x200-meter freestyle relay at the Olympics for the first time since 1908, but just missed a world record.

With a powerhouse group that included the 1-2 finishers in the 200 freestyle, Britain blew away the field in 6 minutes, 58.58 seconds. That was just off the world record set by the Americans (6:58.55) at the 2009 world championships. It was the first British gold in the event since it made its debut at the first London Games.

The four-time defending champion Americans finished fourth — the first time they’ve failed to win a medal in the event other than the boycotted 1980 Moscow Games.

Damian Lillard scored 21 points and the U.S. men's basketball team rebounded from an opening loss with their first victory of these Olympics, romping past Iran 120-66.

Devin Booker scored 16 points and Jayson Tatum had 14 for the Americans, who had their 25-game Olympic winning streak snapped with an 83-76 loss to France on Sunday.

The U.S. not only bounced back with a win but did it in a Dream Team-type performance against an overmatched opponent, racing out for transition dunks and stepping back to knock down 3-pointers.

Japan is pursuing its first gold medal in baseball after the sport was restored to the Summer Games for the first time since 2008. Few medals would mean more to the baseball-crazed country, and expectations are high.

While Major League Baseball players aren’t at these Olympics, Japan’s professional league suspended its season to accommodate the Games.

The top-ranked Serb beat training partner Alejandro Davidovich Fokina of Spain 6-3, 6-1 to reach the quarterfinals of the Tokyo tennis tournament.

Djokovic is attempting to become the first man to achieve a Golden Slam by winning all four Grand Slam tournaments and Olympic gold in the same calendar year. He has already won the Australian and French Opens plus Wimbledon this year. So now he needs the Tokyo Games title and the U.S. Open trophy to complete the unique collection.

Daniil Medvedev nearly fainted during his win over Fabio Fognini while Paula Badosa left the court in a wheelchair after retiring from her quarterfinal match against Marketa Vondrousova.

The U.S. women’s water polo team lost at the Olympics for the first time since 2008, falling 10-9 to Hungary in group play.

The U.S. was a big favorite to win its third straight gold medal coming into Tokyo, but it was pushed hard by China during a rugged 12-7 victory Monday and then it struggled against Hungary. Even with the loss, the Americans still should be able to advance to the knockout round.

It was the United States’ first loss since the 2008 final against the Netherlands. It had a draw in London, but it went 6-0 on the way to the title in Rio.