Left out: More workers now losing hope of getting back jobs 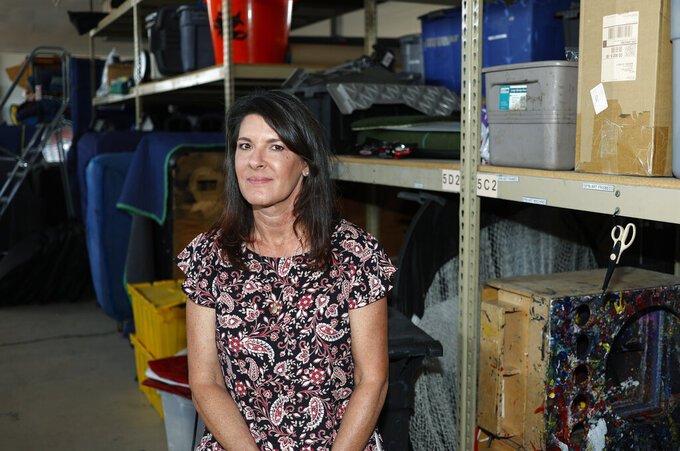 In this Friday, June 5, 2020 photo,, Dawn Abbott, chief executive officer of Fun Productions, a small corporate events company that she started in 1991, is shown amid the myriad unused items stacked in the company's northeast Denver warehouse. The woman's events business was hit hard by concellations with the spread of the new coronavirus and now, three months into the downturn, she does not foresee a quick rebound in the future of her enterprise. (AP Photo/David Zalubowski)

NEW YORK (AP) — Eric Benz didn't worry very much when his graphic design firm in Atlanta laid him off in March. He felt sure he'd be recalled to work once the viral pandemic eased and his firm's clients resumed spending.

Three months later, there's been no call. Instead, Benz has applied for gig work as an Instacart shopper.

Hope has given way to an urgent need to pay bills because Benz's unemployment benefits haven't yet come through. Benz has negotiated with his mortgage lender to defer payments on the home he and his wife bought earlier this year. But the deferral won't last long.

Even as the U.S. economy begins to flicker back to life, even as job cuts slow and some laid-off people are called back to work, the scope of the devastation left by the viral pandemic has grown distressingly clear to millions who'd hoped for a quick return to their jobs: They may not be going back anytime soon.

With many businesses reopening, the government surprisingly announced Friday that contrary to expectations of further layoffs, the economy added 2.5 million jobs in May, and the unemployment rate fell from 14.7% to 13.3%.

But the harsh reality is that last month's rehirings aren't expected to continue at the same pace. Forty-two percent of the layoffs caused by the pandemic could become permanent job losses, according to a study by the University of Chicago's Becker Friedman Institute for Economics. Many businesses, from tech start-ups to small shops and big retailers, may not survive the loss of revenue despite federal rescue aid.

That aid will run out soon. And despite gradual re-openings, public fear of the virus is still keeping many people away from bars, restaurants, hotels, hair salons and other retail establishments. Few have resumed traveling. Sports and entertainment venues remain closed.

That collective slowdown continues to keep millions of laid-off people on the sidelines. In April, 78% of people who were unemployed saw their jobs as temporary. In May, that figure dipped to 73%, according to the jobs report. And a declining proportion of the unemployed were classified as temporarily laid off.

In Charlotte, North Carolina, Alex Jansen's company reopened Monday. But Jansen, a marketing administrator, didn't get the call he expected calling him back to work. He's spending his time learning Adobe programs to strengthen his resume. As unemployment benefits run low, he wonders if he'll feel compelled to leave Charlotte, where job prospects now look sparse to him.

“Everything evaporated because of the virus,” said Jansen, 33. ”This job is feeling like it’s in limbo.”

It took five years for the economy to regain the 8.8 million jobs it lost during the Great Recession. This time, despite the job growth during May, roughly 20 million jobs remain lost. For every 10 layoffs, there have been three new hires, the University of Chicago study found.

"The job picture is horrible,” said Nicholas Bloom, an economist who worked on the research. “I don’t see the U.S. labor market recovering back to full employment for another five to 10 years.”

Dawn Abbott's small corporate events company in Denver was hit early in the pandemic. Her corporate customers canceled picnics, dinners and fairs in the first wave of measures to contain the virus. By March, she had furloughed all but one of her 15 employees.

Abbott assumed it would be a matter of weeks before everyone would be needed back on the job, juggling 20 events a week. Her 19-year-old business was thriving, and she'd given her staff raises and health insurance. Abbott thought it could easily survive a temporary closure.

Yet it gradually become clear that her industry would take far longer to recover, if it ever does. Even as companies reopen offices, her clients have made clear that splashy gatherings are out of the question anytime soon.

Her close-knit team conducts Zoom hangouts, trading ideas for virtual programming. They gather for barbecues outside the warehouse where trucks and bouncy castles sit idle. Abbot can offer only blunt honesty: They shouldn't count on regaining their jobs.

Roger Miller, the company’s director of operations, is relying on unemployment benefits in the meantime.

Businesses like Abbott's, part of the economy's leisure and hospitality sector, have been the hardest-hit industry in the pandemic. This sector shed a shocking 7.5 million jobs in April before regaining 1.2 million of them in May. But while many restaurants and bars are partially reopening, it will take far longer for crowds to return to arenas, theaters and stadiums and to plan large events.

“That kind of thing — where we get together as humans to enjoy things, and anything that seems like a bit of luxury — seems like it's going to be really tough,” said Lowell Taylor, an economics professor at Carnegie Mellon University's Heinz College. “That's where unemployment is going to suffer for a while.”

What about selling diamonds?

Jef Andrews texts his manager every week to ask if he can return to his job as a jewelry designer and salesman in Minneapolis. So far, no updates.

Across the job market, the few areas where hiring has been brisk are industries whose businesses have boomed as a result of the pandemic — from online shopping to grocery stores to streaming entertainment. The supermarket chain Kroger and CVS Healthcare have gone so far as to partner with hotels, retailers and airlines to recruit laid-off workers.

Many people, though, are reluctant to take lower-paying work until they know for sure their old jobs are gone for good. They’ve been helped by a $600 weekly federal supplement to state unemployment benefits. But that aid will expire after July, and it seems unlikely to be renewed.

Kumelachew Yigletu's biggest fear is that his federal supplement will end before he can return to work. Yigletu, a father of three, says that after losing his job as a baggage handler at Ronald Reagan Washington National Airport, the weekly supplement is what allows him to pay his $1,600 monthly rent and other bills.

His employer, Eulen America, has told him must reapply for his old job, and there are no guarantees. At this point, he'll “take anything.”

“The most important thing I do with my family is pray every day for this country," said Yigletu, an immigrant from Ethiopia. “I love America.”