Libertarians debate: How to respond to coronavirus pandemic? 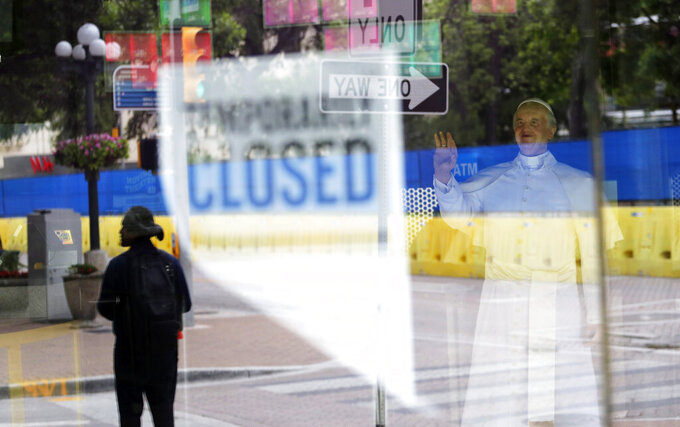 FILE - In this April 10, 2020, file photo, a pedestrian is reflected with a temporary closed sign in the window of a wax museum where a statue of Pope Francis is on display in San Antonio. For libertarians the very thought of massive government aid or the enforced closings of businesses is usually indefensible. But those beliefs can change in a time of crisis, like now. The spread of the coronavirus has renewed a long-running debate among libertarians over such core beliefs as private enterprise and individual autonomy. (AP Photo/Eric Gay, File)

NEW YORK (AP) — Steve Baker, one of the British parliament's leading libertarians, was nearly in tears as he addressed the House of Commons in support of a bill that once seemed unthinkable: a massive economic aid package in response to the coronavirus pandemic.

“Libertarian though I may be, this is the right thing to do but, my goodness, we ought not to allow this situation to endure one moment longer than is absolutely necessary to save lives and preserve jobs," he said last month. “We are implementing tonight in this bill at least a dystopian society.”

Libertarian principles of self-reliance and minimal government have been around for centuries. But they are being tested as never before in a time when much of the world, and many of their adherents, see a clear role for government restriction on basic liberties.

From trillions of dollars in government aid to the enforced closings of schools and businesses around the world, the spread of the coronavirus has renewed a long-running debate among libertarians over such core beliefs as private enterprise and individual autonomy.

In speeches, blogs and other online postings they ask whether it's appropriate — and in what ways — for the government to help those who have lost jobs and businesses. They wonder whether, and to what degree, government should regulate business and personal movement in the name of public health.

"Preventing the spread of infectious disease is within the legitimate functions of the minimal state, which most libertarians accept," says Michael Huemer, a professor of philosophy at the University of Colorado, in Boulder.

In Washington, David Boaz, executive vice president of the Cato Institute, a libertarian think tank, says, “I wouldn’t say we have trouble holding on to libertarian principles. We believe in the presumption of liberty. But that presumption can be overcome in particular circumstances. And that’s part of our understanding of liberty.”

Limited government and personal freedom have long held deep appeal among Americans, who in the name of libertarianism have embraced everything from the legalizing of drugs to the withdrawal of U.S. troops from abroad to the abolition of the Internal Revenue Service.

Notable influences on libertarians have included such political figures as the late Arizona Republican Barry Goldwater and the author Ayn Rand, whose novels “The Fountainhead” and “Atlas Shrugged” have been standard reading for libertarians even as she dismissed the movement as “hippies of the right.”

Former New Mexico Governor Gary Johnson received more than 4 million votes as the Libertarian Party presidential candidate in 2016. Rep. Thomas Massie of Kentucky, a Republican with libertarian views, briefly delayed last month's stimulus bill on constitutional grounds by insisting on an in-person quorum even as his colleagues worried about catching the virus.

More recently, he tweeted: "When Pearl Harbor was attacked, did we pass a bailout or did we declare war on our enemy? Attack the virus not the taxpayers.”

When libertarians weigh in on economic relief, their views are shaped in part by skepticism the government can be relied upon to do anything effectively.

Chris Edwards, director of tax policy studies at the Cato Institute, thinks the direct payments that the U.S. will send to millions of adults are a “total waste of money." But he does find it “reasonable to try to keep companies afloat, especially small businesses with less resources.” Dan Fishman, executive director of the Libertarian Party, believes the unemployed should not hesitate to collect benefits because that money had been taken out of their paychecks against their will.

Huemer predicts “The stimulus will fail,” in part because he is “skeptical about fiscal stimulus in general.”

But Dan Moller, an associate professor of philosophy at the University of Maryland, is more open to government aid.

“Bailouts and stimulus plans are controversial among libertarians both because they tend to be maladministered and for more principled reasons,” he says. “But there’s a case for them in extreme circumstances like these, when you face what is essentially a giant financial coordination problem.”

If keeping people apart is essential during a pandemic, libertarians disagree on how and when to enforce it. Jim Babka, the libertarian commentator and editor-at-large for the Advocates for Self-Government, believes in and practices “voluntary physical distancing.” But he objects to laws enforcing it, saying "it's impossible that a monolithic political response can be more resourceful than millions of people acting to protect their families and neighbors.”

Boaz praises the NCAA, the NBA and other organizations for voluntarily cancelling events. He also says that a case can be made for emergency government actions such as shutting down bars and restricting restaurants to take out and delivery, as long as those laws are lifted after the pandemic subsides.

Fishman calls government “coercion" a “slippery slope” and prefers we “try to persuade the heck out of people to do what's right.”

Moller says that libertarians believe in individual freedom but not at the expense of others, citing a tax on pollution as a legitimate government action. He has a similar defense for preventing carriers of the virus from infecting others.

“What’s weird about a pandemic is that our everyday behavior suddenly puts others at risk — just showing up to work can have huge negative externalities,” Moller says. “So libertarians see restrictions on individual liberty in a pandemic as akin to restrictions on pollution.”

“But we don't want the government to go too far,” Huemer says. “It's well-known that when the government gives itself new powers or passes new laws during a crisis, they often keep the new powers long after the crisis is over. So over the long run, the state's power grows and our freedom shrinks. So we have to continue to watch for that.”

This story has been corrected to show the proper spelling of the last name is Huemer, not Heumer.