Life at 40-plus: Brady vs Brees is tastiest of NFL matchups 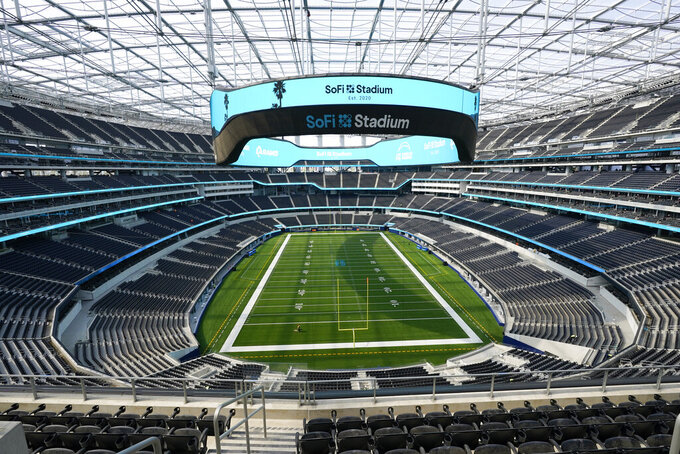 FILE - In this Sept. 4, 2020, file photo, The playing field and seating areas of SoFi Stadium, future home for NFL football's Los Angeles Rams and Los Angeles Chargers, is viewed in Inglewood, Calif. Welcome to Sofi Stadium, Stan Kroenke's billion-dollar palace where the Rams and Chargers will call home. The fans will be at home due to COVID-19, and look for huge TV ratings for this prime-time affair. (AP Photo/Marcio Jose Sanchez, File)

How sweet it can be.

In the first matchup of 40-plus quarterbacks in NFL annals, during one of the most anticipated openers the league has seen — though it won't be seen by fans at the Superdome because of the coronavirus pandemic — Tom Brady makes his Buccaneers debut against that youngster Drew Brees and the Saints.

For now, all those doubts about the NFL actually starting on time can be shoved aside as the sporting world savors these two QB codgers. They are the top two in yards and TDs passing, and it's the first game since 1998 (Dan Marino and John Elway) featuring the 1-2 career yards passing leaders.

The matchup brought Brees back — way back.

“It makes me remember back to 1999 when we played against each other in college," he said. "The Boilermakers traveled up to the Big House (Michigan Stadium). Unfortunately, that one didn’t end too well for us, but I think, little did we know, we would have the opportunities that we’ve had in the NFL. I’m sure I speak for both of us when I say that, I think we both pinch ourselves, the blessing and the opportunity to be able to play this long, play for so many great teams and with so many great players.”

The season opened Thursday night in Kansas City with the familiar sight of Patrick Mahomes effortlessly leading the Chiefs up and down the field. The Super Bowl MVP threw for 211 yards and three touchdowns, Clyde Edwards-Helaire ran through the rain for 138 yards and another score, and the Chiefs began defense of their first championship in 50 years by beating the Houston Texans 34-20.

Welcome to Sofi Stadium, Stan Kroenke's billion-dollar palace where the Rams and Chargers will call home. The fans will be at home because of COVID-19, and look for huge TV ratings for this prime-time affair.

The Cowboys bring what looks like an all-world offense of RB Zeke Elliott, QB Dak Prescott, WR Amari Cooper and a stout line. They also bring a questionable defense that must provide a staunch pass rush to succeed.

LA keeps spending lots of money on stars (cornerback Jalen Ramsey is the latest), but also sent away one of its biggest (running back Todd Gurley).

Some interesting stats for this classic division rivalry:

— The Vikings are 23-9 at home in the regular season since their $1.1 billion venue opened in 2016, tied with New Orleans and Philadelphia for the NFC's best home record during that span.

— Rodgers is 14-8-1 as the starter against the Vikings, including the playoffs, and led Green Bay to a division clincher in last year's finale. His passer rating of 107.1 is the highest of any opposing starting QB against the Vikings.

The lack of fans could have a hefty impact at US Bank Stadium.

The one AFC East team that could once in a while derail the Patriots has been Miami, which upset New England in the 2019 finale, costing Brady's then-team a playoff bye. How much New England flavor do the Dolphins have? Three of their eight captains are newcomers who came from the Patriots: center Ted Karras, linebacker Kyle Van Noy and linebacker Elandon Roberts. Their coach, Brian Flores, was a defensive assistant in New England.

As Brady moved south, Cam Newton headed north from Carolina. Other than Julian Edelman, Newton's receiving group is suspect, and Newton was injured for most of last season.

The Dolphins will wear a jersey patch to honor Don Shula, the winningest head coach in pro football history who died in May at 90.

There's probably plenty of relief in the nation's capital that the season has arrived, even though Washington is expected to be a tailender. Ron Rivera, a highly accomplished coach, has been hired to not only find scoreboard success but to change the culture of a franchise plagued with off-field issues and searching for a new name.

Philly's Doug Pederson also is one of the NFL's best head coaches, somehow managing — along with QB Carson Wentz — to get a severely banged-up team into the 2019 postseason. The Eagles have major questions on the O-line, at receiver and in their secondary.

Lamar Jackson comes off an MVP season and there are lots of folks who believe he will be even better (especially as a passer) in 2020. The Ravens' defense is so potentially formidable that cutting safety Earl Thomas shouldn't hurt.

Cleveland is talented, too, but big egos and immaturity damaged the Browns last year. New coach Kevin Stefanski now is in charge. The Browns haven’t won an opener since 2004 against the Ravens and are 1-19-1 in Week 1 since 1999.

The other Super Bowl team, the 49ers are in the league's toughest division and have the championship game losers syndrome to battle. They can make an early statement that they have the goods to stay on top of the NFC Wes t, and no team returns more snaps; continuity is critical this year.

Arizona has the makings of one of the NFL's most exciting teams now that perennial All-Pro receiver DeAndre Hopkins is aboard. But can the defense improve enough for the Cardinals to contend?

Trips east don't always agree with the Raiders, but they at least get this one to begin things. And they face perhaps the NFC's worst squad in the midst of a total rebuild job under new coach Matt Rhule. They don't know what to expect, either.

“You start to try to meld all of that together to guess what you might be seeing. That’s a difficult challenge,” Raiders general manager Mike Mayock said. "It’s a huge challenge for any team Week 1, but when you’re talking about a college coach coming in, some pro coaches, other college coaches, new personnel, I think our coaching staff has one of the toughest challenges in Week 1.”

Von Miller's severe ankle injury is massive. But the Broncos are 30-7-1 all-time in home openers and no team has a better Week 1 mark than Denver’s 39-20-1.

“Obviously they didn’t have no preseason as well,” Byard said of game officials. “So who knows how many (flags)? I’m pretty sure you’re going to see a lot of penalties, a lot of different things that we’re going to be able to learn from. And us being the last game, we can have a great opportunity to see how all these games are being played with no fans, the referees, just a lot of different factors that we’re going to be able to have before we actually play."

Big Ben makes his return just outside the Big Apple. Steelers QB Ben Roethlisberger is back from a lost year (elbow surgery) and that should revitalize the offense. Pittsburgh already has a defense with Steel Curtain capabilities.

Roethlisberger has 18 TD passes and four interceptions in his past seven games against NFC East opponents. Can rookie coach Joe Judge find some defense to derail Big Ben?

While the tabloids love to ballyhoo this as third-year quarterbacks Josh Allen vs. Sam Darnold, look for this one to be decided by the defenses. That should give a major edge to the Bills given that the Jets’ two best defenders, safety Jamal Adams (dealt to Seattle) and linebacker C.J. Mosley (opted out) are absent.

If Buffalo is a threat to New England in the AFC East at last, it must win this opener.

With so much focus on Brady vs. Brees and the Bucs vs. the Saints in the NFC South, the Falcons have been shuffled aside. Given their history pretty much ever since blowing that monstrous lead in the second half of the 2017 Super Bowl, maybe that's understandable. It's also unwise, because Matt Ryan and Julio Jones remain formidable.

So the defenses could be the deciding factors here, too. Both sides have needed to upgrade their units and how well they did so could determine if they get into the postseason.

Does anyone outside of the Windy City and Motor City expect much from these teams? Does anyone inside those metropolises expect much?

The Lions need a strong record to give coach Matt Patricia some job security. The Bears need a solid season to give QB Mitchell Trubisky the same. At least Chicago has a solid defense.

The Bears are 4-0 under coach Matt Nagy against Patricia.

Philip Rivers' debut with the Colts, who have made some intriguing offseason moves as they try to keep up with Houston and Tennessee in the AFC South. Rivers comes off a poor season and should get a lot more help in Indy. He’s 7-2 in nine starts and has 24 touchdown passes and five interceptions against the Jaguars.

HELP! is probably the byword for the collapsing, uh, rebuilding Jaguars. Jacksonville revamped its roster by getting rid of huge salaries (Nick Foles, Calais Campbell, A.J. Bouye, Marcell Dareus) while becoming younger. Only four players are 30 or older.

Welcome to the pros, Joe.

Top overall draftee Joe Burrow takes over at quarterback for the Bungles, uh, Bengals. If he can avoid the annoying presence of pass-rushing fiend Joey Bosa, Burrow just might give Cincinnati its first winning record (1-0) since the last millennium (just kidding).

The Chargers have won all three season openers against the Bengals.