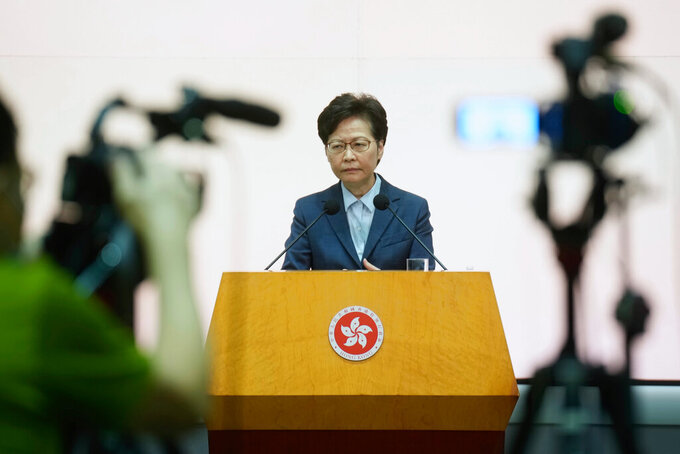 Hong Kong has long been seen as one of the best places to do business globally, highly regarded for its skilled workforce, business-friendly legal system and ease of movement.

However, a survey by The American Chamber of Commerce in Hong Kong earlier this month found that 42% of expatriates polled were planning or considering leaving the city. More than half saying they were uncomfortable with the city’s national security law, which took effect last year and is widely seen as a tool for Beijing and local authorities to suppress dissent in the city after months of anti-government protests in 2019.

Other factors cited by those looking to leave included Hong Kong’s strict quarantine measures for COVID-19 and concerns about Hong Kong’s competitiveness and the quality of education for their children under the new security situation.

Lam said Tuesday during a regular news conference that while surveys provide some reference, one has to look at “what is actually happening on the ground.”

“We have 9,000 mainland and overseas companies based in Hong Kong, including many of them which are using Hong Kong as a regional headquarters and regional offices,” she said.

“We have not seen any significant outflow of capital, the securities markets are doing very well, the banking sector is very stable and generally, life goes on.”

Lam said that in her meetings with business chambers in Hong Kong and overseas, the “initial concern and anxiety” about the national security law have subsided, and that there was interest in policies that could making doing business easier.

Sam Cochrane, a finance professional who left Hong Kong this month, said the pandemic and travel restrictions were the main reasons he decided to return home to Australia after three years.

“It made me worry and question what the future would look like for Hong Kong, and whether it would still have the same feel that it had in the past,” he said. “I value independent journalism and democratic processes.”