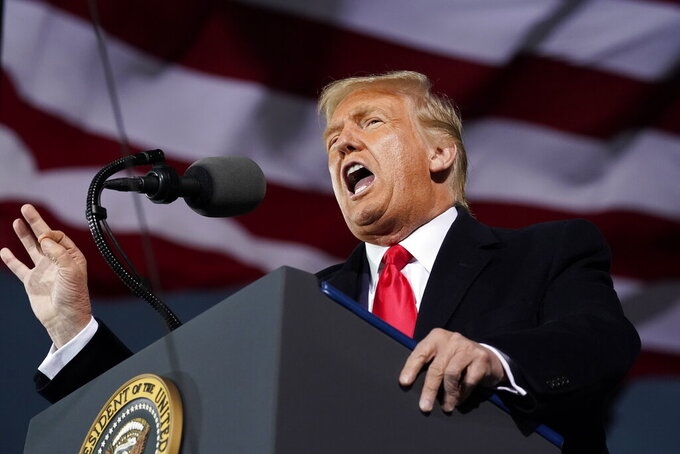 DES MOINES, Iowa (AP) — President Donald Trump on Wednesday sought to shore up support from constituencies that not so long ago he thought he had in the bag: big business and voters in the red state of Iowa.

In a morning address to business leaders, he expressed puzzlement that they would even consider supporting his Democratic challenger, Joe Biden, arguing that his own leadership was a better bet for a strong economy. Later, the president held his third campaign rally in three nights, this time in Iowa, a state he won handily in 2016 but where Biden is making a late push.

Trump claimed to be leading in the most recent poll he saw. “For me to only be up six, I'm a little bit concerned,” he asserted. Multiple polls have shown a much closer race.

Biden, for his part, held a virtual fundraiser from Wilmington, Delaware, and delivered pretaped remarks to American Muslims. He did not have any public campaign events, unusual for just 20 days out from Election Day.

The Democratic nominee used his appearance at the fundraiser to say that Trump was trying to rush through Amy Coney Barrett, his nominee for the Supreme Court, to help his efforts to repeal the Obama health care law, calling that “an abuse of power.”

Biden was expected to spend much of the day preparing for a town-hall-style TV appearance in battleground Pennsylvania on Thursday, which was to have been the night of the second presidential debate.

Instead, the candidates will have dueling town halls on network television — Trump’s in Miami and sponsored by NBC News, Biden’s in Philadelphia and on ABC. Trump backed out of plans for the originally scheduled presidential faceoff after debate organizers shifted the format to a virtual event following Trump’s coronavirus diagnosis.

Trump used his economic address Wednesday to play up his administration's commitment to lowering taxes and deregulation of industry, and he didn't hide his frustration with signs that some in the business community are tilting to Biden.

“I know I’m speaking to some Democrats, and some of you are friends of mine,” Trump said in a virtual address to the Economic Clubs of New York, Florida, Washington, D.C., Chicago, Pittsburgh and Sheboygan, Wisconsin. Should Biden be elected, he continued, “You will see things happen that will not make you happy. I don’t understand your thinking.”

The former vice president has collected more than $50 million in campaign contributions from donors in the securities and investment sectors, according to the private nonpartisan Center for Responsive Politics. During his decades in the Senate representing Delaware, a center for the credit card and banking industries, Biden built relationships and a voting record in the business sector that has raised suspicion on the left but provides Wall Street with a measure of ease at the prospect of a Biden administration.

After being sidelined by the coronavirus, Trump resumed a breakneck schedule this week, with aides saying he is expected to travel and host campaign rallies every day through Nov. 3. Trump has appeared hale in his public appearances since reemerging from quarantine, though at moments during his economic address on Wednesday his voice was raspy.

His trip to Iowa comes as the state this week surpassed 100,000 coronavirus cases and has seen a recent surge in hospitalizations. The number of people being treated in Iowa hospitals for COVID-19 reached a new high Wednesday of 473 people.

Biden has tried to make Trump's handling of the pandemic, which has killed more than 215,000 Americans, the central issue of the election.

“President Trump isn’t coming to the Hawkeye State to offer words of comfort to those suffering, or a helping hand to the Iowans who are out of a job, or an actual plan to get the virus under control," Biden said in a statement. “Instead, he’s here to spread more lies about the pandemic and distract from his record of failure."

Officials at the Des Moines airport were told to plan for up to 10,000 people, and such Trump campaign events typically feature little to no social distancing and only spot mask wearing.

A public health emergency declared by Republican Gov. Kim Reynolds in March remains in place and requires that organizers of mass gatherings “must ensure at least 6 feet (1.8 meters) of physical distance between each group or individual attending alone."

Trump acknowledged Reynolds' presence at the rally. “Thank you, honey,” he said.

Trump had an extra treat in mind for Iowa voters, drawing on one of the perquisites of his office: Ahead of his visit, Trump said he would be awarding the Presidential Medal of Freedom to Iowa wrestling legend Dan Gable. The former University of Iowa coach won 15 NCAA team championships from 1976 to 1997.

Donning a red hat and tossing away his tie to fight off the stiff breeze on the airport tarmac, Trump made a direct appeal to the state’s farmers, saying that he was responsible for $28 billion in aid designed to help offset damage stemming from his trade war with China. “I hope you remember that on Nov. 3," Trump said.

But after years of farmers supporting him despite the trade war, some Republicans say Trump’s renewable fuel policy has sown some doubt.

Trump’s Environmental Protection Agency granted dozens of waivers to petroleum companies seeking to bypass congressional rules requiring the level of the corn-based fuel additive ethanol that gasoline must contain. He has recently denied more waiver requests, but the EPA’s previous action removed about 4 billion gallons of ethanol demand, resulting in the closure — at least temporarily — of more than a dozen ethanol plants in Iowa.

While mostly laying low on Wednesday, Biden has stepped up campaign travel in the past week, with visits to Arizona, Nevada, Florida and Pennsylvania. The former vice president isn’t introducing new themes in his pitch that he’s a steady alternative to Trump. Biden and his aides believe the president’s scattershot campaign messaging since his COVID-19 diagnosis proves the core of Biden’s case.

Trump’s return to Iowa comes as he has been forced into playing defense following a widely panned debate performance and his own coronavirus diagnosis. Republicans have raised alarm that enthusiasm among Trump’s base has waned slightly after the one-two punch of those events, casting his reelection into doubt.