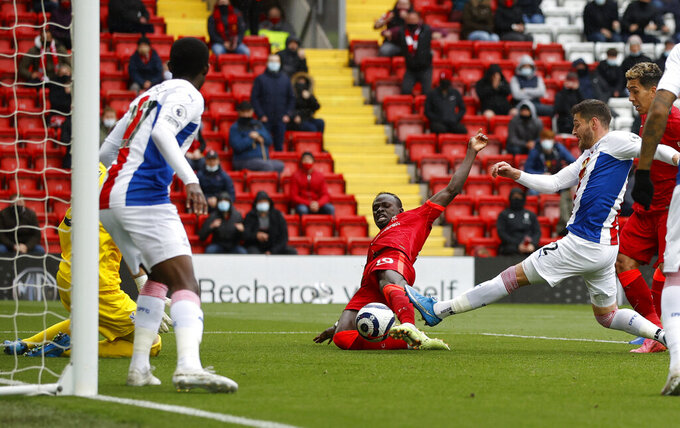 Fans were allowed back into Anfield for the first time in 2021 in time to see Sadio Mane's double clinch a final-day 2-0 victory over Crystal Palace on Sunday.

After winning the Premier League trophy last season — to end a 30-year English title drought — celebrating third place might seem underwhelming. Especially when the team was top the last time fans were allowed briefly back onto the Kop in December.

But three months ago, Jürgen Klopp's side fell out of the top four.

“It was absolutely out of reach,” the manager said.

Liverpool was in a downward spiral, dropping to eighth place 77 days ago after being beaten at an empty Anfield by a Fulham side that would go on to be relegated.

Even with key players still injured — notably center back Virgil van Dijk — Klopp used the final 10 league games to mastermind an unbeaten recovery to ensure the comedown from the title last year wasn't quite as crushing by securing a return to the Champions League. The Reds returned to fourth with a game to go and even managed to move up another place.

“Fighting through and finishing third it is one of the best lessons to learn for life," Klopp said. “From nowhere to the Champions League in five weeks — that’s a massive achievement."

It was only a month ago that Liverpool wanted out of the Champions League with the ill-fated bid to split to join a European Super League.

“I’m really happy for the Champions League they don't have to play without us,” Klopp said.

It's not just about prestige, but finances with over $100 million in potential earnings from UEFA, let alone the matchday revenue.

And if coronavirus restrictions continue to be eased up — and more vaccines are administered as happened outside Anfield on Sunday — the stadium should be full by the time the group stage begins in September.

Not since Liverpool played Atletico Madrid in March 2020 — on the day the pandemic was declared — has Anfield been at capacity. Only briefly in December were 2,000 fans briefly allowed back before the second wave of coronavirus infections shut the turnstiles again.

So Sunday's crowd of 10,000 was the largest in 14 months and it was a jittery spring afternoon that felt more like winter in the chill.

Even though top-four rivals Chelsea and Leicester would go on to lose, Liverpool made sure its top-four fate remained fully in its own hands.

After Andros Townsend missed scoring chances for Crystal Palace, Mane slid in to score after Andrew Robertson's corner in the 36th minute. And Mane's shot was deflected in by Palace defender Gary Cahill in the 74th minute for Liverpool's final goal of a season of mixed fortunes and no trophy.

Still, there was a chance at least for a lap of honor with fans — the type they were denied when the trophy was handed out in front of empty seats last July.

“To have the opportunity to have this game in front of 10,000 people means really the world for us,” Klopp said. “The 10,000 did a really good job today. When we came out it sounded like sold out.”

It allowed Georginio Wijnaldum to receive a rapturous farewell after returning to the pitch post-match through a guard of honor of teammates. The Netherlands midfielder is leaving after being unable to strike an agreement to extend his contract.

“I hope to have played many more years for the club,” he said. “But unfortunately things went differently.”

There was also a farewell from a former Liverpool manager, with Roy Hodgson ending his four years in charge of Palace and stepping away from topflight coaching after a well-traveled career that took in the England and Inter Milan jobs.