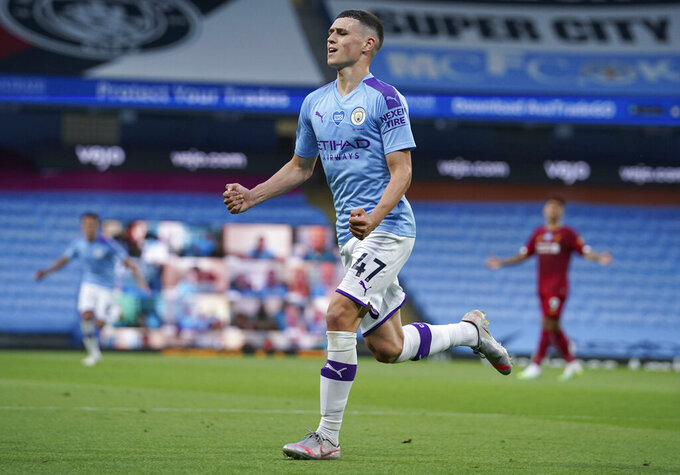 MANCHESTER, England (AP) — As they stepped onto the pitch, Liverpool's players were given a guard of honor from Manchester City. It was the only time they looked like Premier League champions on Thursday.

“I think they drank a lot of beers in the last week,” City manager Pep Guardiola said.

The dethroned champions made sure there was an abrupt comedown from the partying. A merciless attacking display sparked by City scorers Kevin De Bruyne, Raheem Sterling and Phil Foden consigned Liverpool to a 4-0 loss exactly a week after its 30-year title drought ended.

“They were quicker than us in mind -- we lacked fluidity,” Liverpool manager Jürgen Klopp said. "Isn’t it nice another team can be champions when Man City play so well?”

The slack defending and lack of sharpness from Liverpool was perhaps forgivable from players who had spent the previous 31 rounds establishing an unprecedented 23-point lead to become England’s earliest champions.

Such an emphatic loss is not how Liverpool wanted to close out such a memorable season. Especially when there are still has enough games to overhaul City’s record 100-point haul from 2017-18.

Klopp wasn’t as downbeat as the result suggested — despite Liverpool going a fifth away game in all competitions without scoring.

“I saw a brilliant attitude, I saw boys who were fighting with all their effort,” he said. “We didn’t behave like somebody who became champions a week ago."

It was a night to forget for so many Liverpool players -- particularly Joe Gomez, who dragged Raheem Sterling down to concede a penalty converted by Kevin De Bruyne in the 25th minute.

“We tried to play football, taking risks," Guardiola said, "because they are the best team I ever faced in my life with high pressing, it is incredible how fast they are, how quick they play.”

De Bruyne and Phil Foden helped City stylishly waltz through Liverpool and show how the title can be reclaimed next season.

Receiving a pass from Foden, Sterling took the ball past Gomez with left boot before using his right to knock in City’s second in the 35th minute. Sterling and Gomez reunited in a Premier League match for the first time since Liverpool's victory over City at Anfield in November that was followed the next day by a training camp altercation while they were on England duty.

After being run ragged in central defense, Gomez was substituted at halftime.

Before the break, City still had time to produce a third.

The technique in the buildup would have had fans on their feet — if they were not prohibited due to the coronavirus pandemic.

Instead fewer than 300 people inside the Etihad Stadium could savor the counterattack that was capped by Foden playing a one-two with De Bruyne before raising the ball into the net past Alisson.

“This is a team that is evolving and changing — you can see the maturity Phil is playing with," Sterling said. "I think in the future we have some great players.”

It summed up Liverpool’s night that the fourth goal came from an own goal after another blistering City attacking move. De Bruyne picked out Sterling who turned Andrew Robertson and sent in a shot that was deflected into his own net by Alex-Oxlade Chamberlain.

Only VAR spared Liverpool a greater humiliation in stoppage time when a handball by Foden was spotted in the buildup to Riyad Mahrez putting the ball in the net.

Consider it a message from City.

“Next season started today,” said Sterling, who has won the Premier League twice since leaving Liverpool five years ago, “and we did well.”

There is still unfinished business for City before pandemic-delayed conclusion to the season in August.

City plays Arsenal in the FA Cup semifinals and has a 2-1 lead over Real Madrid after the first leg of the Champions League's interrupted round of 16.

“We were disappointed at times this season having lost some games we shouldn’t have,” Sterling said. “So we had a test against the new champions and (a chance) to make a point.”