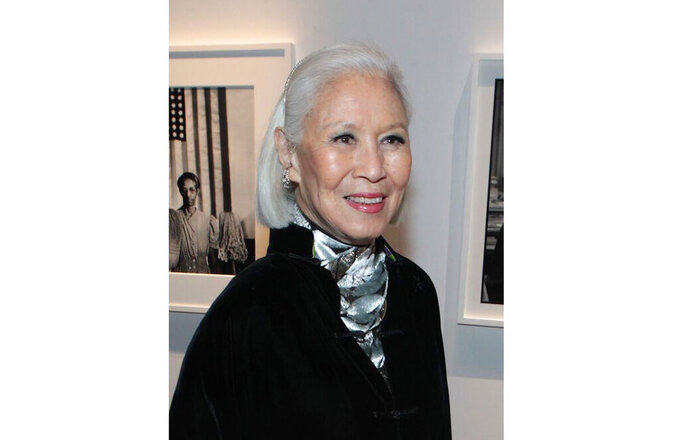 This 2018 photo released by the Gordon Parks Foundation shows Genevieve Young, a publishing editor and wife of photographer and filmmaker Gordon Parks. Young was 89 when she died at her home in Manhattan on Feb. 18, 2020, after a long battle with cancer. She was a publishing editor with a long and diverse legacy. Beyond publishing a paid notice in The New York Times, the family says it had trouble finding anyone to report on her death because of the quickly spreading coronavirus. Plans for a memorial tribute, originally scheduled for last spring, remain on hold. (Gordon Parks Foundation via AP)

NEW YORK (AP) — Genevieve Young was a publishing editor with a long and diverse legacy.

She entered the business in the early 1950s, when there were few female editors and even fewer Asians. She worked with authors ranging from Herman Wouk to Betty Rollin and played a key role in the writing of Erich Segal's “Love Story,” the novelization of the Oscar-winning movie of the same name that is currently marking its 50th anniversary. She also edited the groundbreaking photographer and filmmaker Gordon Parks, married him in the 1970s and later helped oversee his estate.

Young's name was known to many in the industry and beyond. But her death received little initial attention. She was 89 when she died at her home in Manhattan on Feb. 18, 2020, after a long battle with cancer. Beyond publishing a paid notice in The New York Times, the family says it had trouble finding anyone to report on her death because of the quickly spreading coronavirus. Plans for a memorial tribute, originally scheduled for last spring, remain on hold.

“She was a pioneer, and not just in her working life,” says her nephew, Douglas Hsieh. “She was one of the first women in an editorial position in the publishing industry and she was with my uncle Gordon (Parks) at a time there were not that many interracial couples.”

Known to her friends as “Gene,” Young started in publishing in 1952, soon after graduating from Wellesley College. She rose from being “Stenographer No. 2” at Harper & Brothers (now HarperCollins) to editorial director of Bantam Books. Her notable projects included Nancy Milford’s acclaimed biography of Zelda Fitzgerald, Stephen Birmingham's popular social history “Our Crowd” and the novelization of “Love Story.”

Segal’s 1970 melodrama inverted the usual formula for books and movies: It wasn’t a film based on a novel, but a novel based on a movie at the time in production. Segal had been writing the screenplay for Paramount producer Robert Evans and wanted to turn his work into a prose narrative. The Yale classics professor had released a previous work, “The Death of Comedy,” through Harper but was considering a different publisher for the more commercial “Love Story.”

Young convinced Segal to stay with Harper by offering what seemed like an extravagant advance, $7,500, and even got the author to promise he would return the money if he couldn’t finish the book. She then talked him into changing the structure of the plot about two college students who fall in love. Segal had wanted to wait until the end to reveal that young Jennifer “Jenny” Cavilleri, played on screen by Ali McGraw, will die of cancer. Young disagreed.

“I said to him, ‘You can’t work up to her dying at the end. That’s like grand opera. You’ve got to kill her off in the first paragraph,’” Young told Al Silverman for his publishing history “The Time of Their Lives,” released in 2008. “He’d say, ‘I can’t do it.’ and I’d say, ‘Yes, you can.’ He finally did that famous sentence, ‘What can you say about a 25-year-old girl who died?’ It took him three weeks to write the first paragraph and about another three weeks to write the rest.”

Reviewers mocked the movie “Love Story,” but it was among the biggest box office hits of its time and became a cultural touchstone, especially for the catchphrase “Love means never having to say you're sorry.” The novel had a similar fate, selling millions even as critics despised it, and author William Styron, a judge in 1970 for the National Book Awards, labeled it “a banal book which simply doesn’t qualify as literature.”

Cancer was also at the center of a nonfiction bestseller Young edited: Rollin's “First, You Cry," the NBC television correspondent's memoir about being treated for breast cancer. Several publishers turned down the book before Young agreed to take it on. Published in 1976, “First, You Cry” has been credited with encouraging others to discuss their experiences with cancer and was adapted into a television movie starring Mary Tyler Moore.

“She really changed my life. She went to town for my book when nobody else would,” Rollin told the AP. “I remember she told me that she liked it because it was about cancer, and it was funny. And, I remember her saying, “I love it because it's not in-spi-ra-tion-al.' She said it with a certain kind of loathing that made me laugh out loud.”

Young's own life had the trauma and adventure of a Hollywood epic. A diplomat’s eldest daughter, she lived all over the world as a child, from her native Geneva, to Shanghai and Andover, Massachusetts. Her father, Clarence Young, was the Chinese consulate general in the Philippines at the start of World War II and was captured and executed by the Japanese within months of the bombing of Pearl Harbor. Her mother, Juliana Young Koo, fled with her three daughters to the U.S. near the end of the war and worked at the United Nations in its early years (She was 111 when she died, in 2017). Much of Genevieve’s childhood was spent around female peers, whether at home (her siblings were Frances Tang and Shirley Young, a prominent businesswoman and cultural diplomat who died just months after Genevieve), at Wellesley, or the Abbot Academy.

Besides working at Harper and Bantam, Young was a senior editor at Little, Brown and Company and a vice president at J.B. Lippincott, and other authors she worked with included Henry Kissinger and Craig Claiborne. In retirement, she continued to edit on a freelance basis and volunteered for numerous organizations. She was also an adjunct professor at New York University's publishing program.

She met Parks in the early 1960s. He was writing the novel “The Learning Tree,” a 1963 publication he later adapted into a film of the same name, becoming the first Black director of a major Hollywood studio release. Young was Park's editor at Harper. Both had been previously married, she to Cedric Sun, when he began the book.

“I found her extremely attractive and intelligent,” Parks told People magazine in 1974, soon after he and the tall, elegant Young married. “And what more does a guy want? We became friends, and fell in love somewhere along the line.” Young, interviewed at Wichita State University in 2012, remembered him as a self-taught perfectionist with a “tremendous urge to tell his story,” with the help of “a lot of pushing and shoving.”

They were attractive enough, apparently, to have LIFE magazine photograph them reading together in bed, a widely seen and carefully staged shot that Young called a “disaster” and wished she could have destroyed. She and Parks divorced in 1979 after six years of marriage, but they remained close. She saw him often in the years immediately before his death in 2006, and helped establish the Gordon Parks Foundation, which later this year is launching a fellowship in her honor.

“It's because of Gene that there is a foundation,” says the foundation's executive director, Peter W. Kunhardt Jr. “When you have an artist like Gordon Parks, there are a lot of voices and a lot of decisions that need to be made. Gene was the consistent voice that kept it all very clear.”