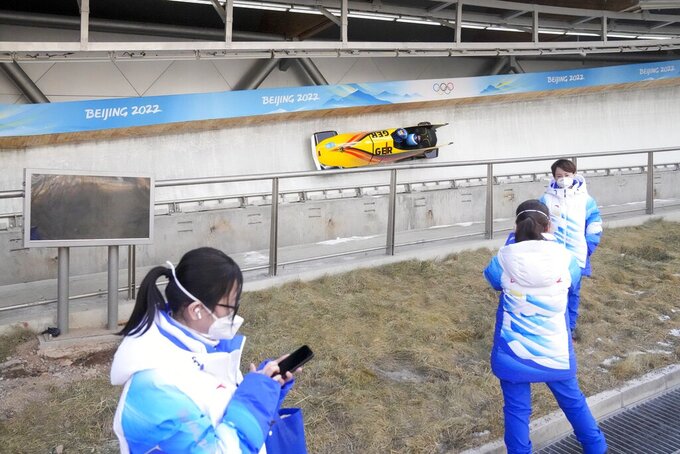 Francesco Friedrich, for Germany, drives his 2-man bobsled during a training heat at the 2022 Winter Olympics, Thursday, Feb. 10, 2022, in the Yanqing district of Beijing. (AP Photo/Mark Schiefelbein)

BEIJING (AP) — There are no rear-view mirrors on a bobsled, which is fitting when considering Francesco Friedrich’s approach to the sport.

He doesn’t look back. Only forward.

That’s why the greatest men’s bobsledder in the world right now — and probably ever — has no desire to talk about his legacy or what he’s already accomplished to this point. His mind is always on the next thing, the next race, the next challenge. And right now, that means the Beijing Olympics, where the start of the men’s bobsled competition comes Monday with the first two runs of the two-man event.

“He’s a special guy,” U.S. bobsledder Carlo Valdes said. “He’s going to go down as the best, most successful, pilot in history. He’s been doing this for a long time and there’s a reason why he wins so many medals, world championships, gold and gold in the Olympics in 2018. It’s cool to be able to compete against him. It’s also annoying: He wins all the time and we’re like ‘Hey, we get it.’”

Valdes, good-naturedly, approaches Friedrich most every race week with a message: “It’s not going to be your week,” Valdes tells him.

And that prediction is usually very wrong.

It’s not correct to say that Friedrich always wins. It’s pretty close, though. Going back to the 2018 Pyeongchang Olympics, Friedrich has competed in 71 major international races — meaning Olympics, World Cups and world championships.

He’s medaled in 67 of those, an even more absurd 94%. His worst finishes in the last four years: two fourth-places, one fifth-place and one 12th-place. That’s it.

He dominates his sport like very few others have. He beats just about everyone every single week. It would seem to be a recipe for resentment among his competitors.

Friedrich’s name is everywhere in bobsledding — the record books, Olympic history, European history, and even U.S. sleds. Yes, really. When the American men’s team was fundraising before this season began, anyone who donated at least $500 was going to get rewarded by having their name added to the side of one of the team’s bobsleds.

Friedrich gave $500. True to their word, the Americans put his name on the sled.

“He’s one of my idols in the sport,” U.S. pilot and first-time Olympian Hunter Church said. “I remember when he won his first world championship medal and he got asked about his next goal, and he said, ‘this is a great victory but it doesn’t matter until I am the best bobsled driver of all-time.’ It was his mission to be one of the greatest. To strive for consistent greatness, or be better than you were the day before, it’s what he’s done and it’s what will keep me going.”

Bobsled is one of those super-secretive sports. It’s an unwritten rule: Don’t ask pilots about the technology that goes into their sleds, don’t ask about technique, don’t ask about setups. Some teams get upset if they see anyone from another nation even daring to look at one of their sleds.

Friedrich goes the other direction. He doesn’t share all his secrets, but enough. The $500 gift to the U.S. program was far from the first time he’s donated money to other teams; he also got his name on Benjamin Maier’s sled for Austria this season after sponsoring that program, too.

“Francesco thought it would be funny if his name was on my sled,” Maier said.

Thing is, Friedrich doesn’t really think it’s funny. He gives money because he can, because it’s the right thing to do — and because he feels a responsibility to grow the sport, even if that means helping rivals.

“The day that there’s a limited amount of sleds on the World Cup tour is the day the sport dies,” Valdes said. “You can see that he’s just trying to do his part to keep it going.”

Here’s perhaps the best example of that: The four-man sled that Friedrich used to win gold in Pyeongchang is here at the Beijing Games — now painted in Canada colors.

He sold it to them.

“He definitely wouldn’t have sold the sled if he didn’t have something better, right?” said Canadian pilot Justin Kripps, who tied Friedrich for the two-man gold at the Pyeongchang Games. “It’s a very expensive item to have sitting in your garage unused, so I can see why he sold it.”

Kripps and Friedrich are close friends. Kripps is one of the very best in the world at what he does, a true medal contender. And even he has no doubt about who the favorite is in Beijing.

Friedrich wants no part of that thinking.

He’s modest, almost to a fault. He talks about how much he enjoys working on his sled, building relationships with his teammates, supporting others. He’ll talk about almost anything.

Anything, that is, except his own success. Maybe someday. Not yet. There’s more to win.

“That doesn’t matter in this moment,” Friedrich said. “We have to prepare in the moment for this. When that is over, we can talk about it. I have a job and I do what I can do. That’s what is fun to me and that’s my motivation. Every day, I have fun.”