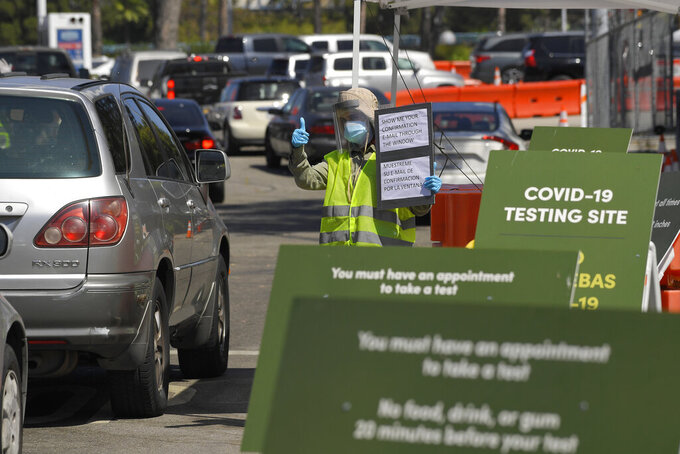 LOS ANGELES (AP) — Coronavirus cases have surged to record levels in the Los Angeles area, putting the nation’s largest county in “an alarming and dangerous phase” that if not reversed could overwhelm intensive care units and usher in more sweeping closures, health officials said Wednesday.

The situation is so uncertain organizers of the 2021 Rose Parade in Pasadena canceled the New Year's Day tradition for the first time in 75 years out of concern that even six months from now infections could spread among participants and the hundreds of thousands who line the route.

That move came two days after California Gov. Gavin Newsom shut bars and indoor dining statewide, and ordered closures of hair salons, gyms, malls and other indoor businesses in Los Angeles and other counties experiencing the most significant surge of virus cases. In Los Angeles, Mayor Eric Garcetti warned authorities were “on the verge” of resorting to shutting down all but essential businesses.

Statewide figures reported Wednesday confirmed 11,126 additional cases of the virus on Tuesday and 140 deaths, the second-highest one-day totals. Los Angeles County, home to a quarter of the state’s population, reported 2,758 more confirmed cases and 44 deaths. The county’s overall death total is just under 4,000 — well over half California's total of about 7,200.

“Do we want to go back to a safer-at-home order where we close everything down again? Absolutely not. None of us want to go back there,” Ferrer said. She said people must wear masks and maintain social distancing to slow the spread.

Health officials believe much of the recent surge is coming from transmissions among social circles and families and friends gathering for traditional summertime activities. While the elderly and infirm are most vulnerable, younger people — those between 18 and 40 — now are accounting for an increasingly large percentage of cases.

“I implore you to turn down that invitation to hang out with a group of friends,” Los Angeles County Supervisor Hilda Solis said. “In person gatherings are simply not worth the risk.”

The infection rate among those tested in LA County has been rising and now is nearly 10% and the three-day average of hospital patients is above 2,000 for the first time. Ferrer called it “an alarming and dangerous phase” for the county.

Dr. Christina Ghaly, the county's director of health services, said ample hospital space is available but if the transmission rate continues to rise “the number of ICU beds may become inadequate. “

Ghaly said the county would greatly expand testing in areas with high populations of low-income Blacks and Hispanics. Those groups make up a disproportionately high number of cases and deaths.

Meanwhile, in Northern California, San Francisco said it would continue to delay the reopening of many businesses because of a surge of infections in the city, where the positive case rate per 100,000 has increased to nearly 8%. The goal is to keep it at around 2%, said Dr. Grant Colfax, director of public health.

“Unfortunately, we are experiencing a surge in COVID-19 infections that is affecting our community’s health and our reopening plans,” he said. “As a result, we are forced to continue to pause our reopening plans until conditions improve.”

Even with the recent increase, San Francisco's population of nearly 900,000 people has fared remarkably well during the pandemic, with a total of 4,696 cases as of Wednesday and 50 deaths.

The city has maintained some of the most stringent measures in the state since a shelter-in-place order in the San Francisco Bay Area began March 17. Unlike nearly every other county, it never reopened indoor dining, hair and nail salons, barbershops, museums, gyms, and other businesses considered high-risk for transmission of the virus.

San Francisco and Sacramento became the latest major school districts to announce that classes would resume in the fall without on-site instruction. Los Angeles, San Diego and Oakland are among other districts with similar plans.

It's not just California's major urban areas that are seeing big increases in cases. In San Joaquin County on the northern edge of the state's Central Valley agricultural region, ICUs are operating at 121%. San Joaquin County officials called in a federal medical assistance team of 20 physicians, nurses and respiratory therapists to help as medical centers add more beds.

In LA County, Rose Parade organizers used health data to determine that even with intensive efforts to ensure social distancing and use of face coverings the event would be a high-risk environment for spread of the virus. Though the parade is nearly a half-year away, officials said a decision needed to be made now because work on floats and performances start months ahead of time and require many people to gather in unsafe ways.

“While we are extremely disappointed that we are unable to host the parade, we believe that not doing so will prevent the spread of COVID-19," said David Eads, CEO of the Tournament of Roses Association.

This story has been corrected to show there were 11,126 additional cases of the virus on Tuesday, not Wednesday.