Loss of college football games a blow for Pullman businesses 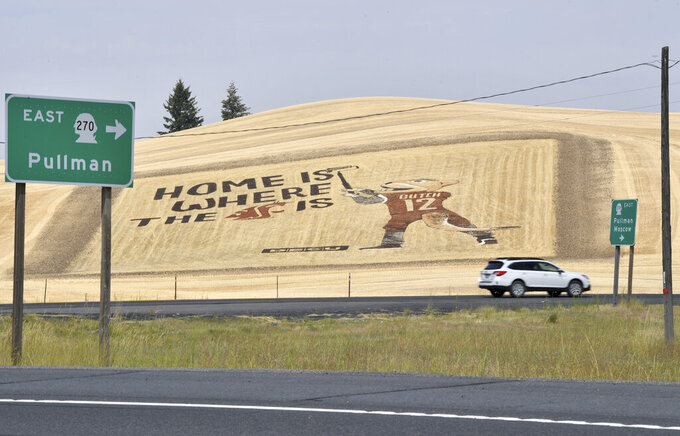 Cars pass a giant Washington State University mural covering a wheat field Thursday, Aug. 13, 2020, near Pullman, Wash. The athletes weren't the only ones impacted when Washington State's fall football season was canceled by the coronavirus pandemic. Merchants in tiny Pullman who depend on big football crowds say they are losing a major chunk of their annual income. (Tyler Tjomsland/The Spokesman-Review via AP)

The athletes weren't the only ones affected when Washington State University's fall football season was canceled by the coronavirus pandemic. Merchants in tiny Pullman, Washington, who depend on big football crowds say they are losing a major chunk of their annual income.

Pullman, the most remote outpost in the Pac-12, has only 34,000 residents. Many businesses in town depend on visitors attracted by football games, graduation and other special events.

The pandemic has led to the cancellation of many of those events, including seven home football games that annually provide a lifeline to hotels, restaurants and other retailers.

Of Pullman’s 34,000 residents, about 20,000 are Washington State students and many of the rest are faculty and staff. Without the college, Pullman would be another small farm town amid the rolling hills of the fertile wheat country known as the Palouse.

“We expect to be down 50 to 60% in annual sales this year,” said Bob Cady, owner of the Cougar Cottage, an iconic bar and restaurant in Pullman close to Martin Stadium, where the Cougars play their home football games.

It’s the same story in small college towns across the nation. The loss of business revenue is especially acute in isolated Pullman, however, which is 300 miles (480 kilometers) east of the Seattle metropolitan area, where many of Washington State’s alumni live. It’s one of the most remote schools among the Power Five conferences.

The cancellation of Mom's weekend and graduation ceremonies last spring, and the recent decision by the Pac-12 to postpone the football season to next year at the earliest will devastate business at what is popularly called The Coug, Cady said. In reality, Cady has long expected the football season to be canceled.

Football Saturdays are especially active in Pullman. Fans in RVs begin flocking from across the state starting on Thursdays, and stay until Sunday. They patronize restaurants, bars and other retail outlets. The few hotels in town are booked months in advance and can charge premium rates for rooms.

"That's going to be a huge hit,'' Marie Dymkoski, executive director of the Pullman Chamber of Commerce, said about the loss of fall football.

The business community is used to feast-and-famine cycles in Pullman, especially in summer months, Dymkoski said.

This year, it has mostly been famine. "We've already lost some businesses,'' Dymkoski said.

This economic hit follows one of the most profitable and memorable stretches in the history of Cougar football.

Under colorful coach Mike Leach, the Cougars went to six bowl games over the past eight seasons, an unprecedented stretch for the century-old program. Martin Stadium was often full or close to full, playing at the highest rate of capacity in the league.

Last year, the Cougars averaged 28,500 fans per game, perhaps half coming from out-of-town. A 2015 economic study found that football and men's and women's basketball games drew a combined 276,000 fans in 2013, supporting $1 billion in economic activity that year.

There have been some huge football weekends in Pullman in recent years. ESPN “GameDay” came to town for the first time in 2018, creating pandemonium as fans poured into the town from across the region to take part in the broadcast.

Leach left after last season for Mississippi State University. His replacement, Nick Rolovich, has yet to conduct a practice in Pullman because of the pandemic.

People in Pullman are not giving up. Like their ancestors who turned the arid landscape into a worldwide bread basket, many Pullman residents are digging in for the long haul.

Several websites have cropped out that encourage far-flung alumni of WSU to buy gift cards from local businesses.

City councilman Brandon Chapman, a WSU graduate, is involved in one of those efforts.

“Not having fall sports will certainly hurt local-area businesses, as well as residents since the city won't receive nearly as much sales tax revenue,'' Chapman said. ”But there are opportunities to help.''

One Pullman resident who refuses to predict gloom and doom is long-time Mayor Glenn Johnson, who also happens to be the public address announcer for WSU sports.

Johnson noted that even though WSU is offering only online classes in the near future, the vast percentage of students will return to Pullman rather than live at home. That's because many have signed leases that can't be broken, Johnson said.

"That makes a huge difference around here,'' Johnson said.

And the reduction in the city's share of sales tax revenue is not as bad as anticipated, Johnson said, down about 15%.