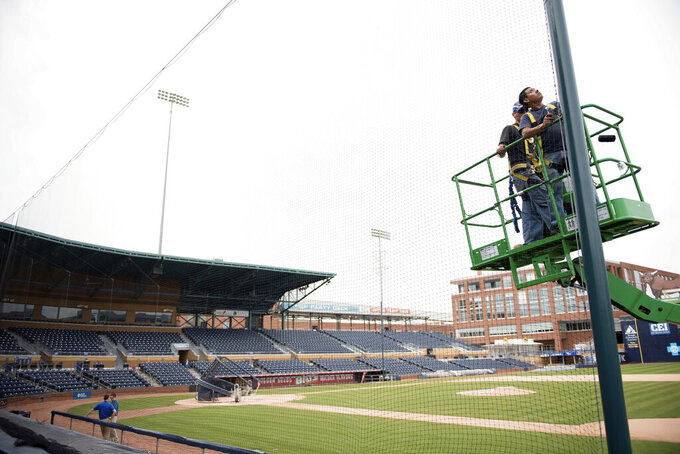 In this March 31, 2016, file photo, Elias Ruiz, front right, and Steven Woytysiak, both from C&H Baseball, help install a 35-foot-high safety netting that runs behind home plate and along the length of each dugout at the Durham Bulls Athletic Park in Durham, N.C. While Major League Baseball tries to figure out a way to play this summer, the prospects for anything resembling a normal minor league season are looking increasingly bleak. For minor league communities across the country, looking forward to cheap hot dogs, fuzzy mascot hugs and various theme nights, it's a small slice of a depressing picture. (Whitney Keller/The Herald-Sun via AP, File)

CHICAGO (AP) — Mike Nutter is surrounded by questions everywhere he goes these days. So the longtime president of the Fort Wayne TinCaps is planning for each scenario he can imagine, one at a time.

What does minor league baseball look like in the COVID-19 age? What happens if his Class A team plays only half a season?

And the big one: What if there are no games at all?

While Major League Baseball tries to figure out a way to play this summer, the prospects for anything resembling a normal minor league season are increasingly bleak.

For minor league communities across the country from Albuquerque to Akron, looking forward to cheap hot dogs, fuzzy mascot hugs and Elvis theme nights, it's a small slice of a depressing picture.

Attendance at minor league games last year was more than 41.5 million, a 2.6% increase over 2018 and the 15th straight year with more than 40 million fans.

Among the most popular teams in the minors is the Durham Bulls. But no club is immune from the effects of the coronavirus pandemic. The Bulls recently placed more than half of their front-office staff on furlough.

“I’m still holding out hope, but we’re also being realistic that the challenges we face over the next few months are pretty severe just because we are so spread out around the country,” Bulls vice president Mike Birling said.

“And we kind of need a perfect storm in terms all of the cities of where Triple-A teams are located would need to be OK, which that seems pretty unrealistic right now."

Nutter tackles each day with a focus on what's most important to his San Diego Padres affiliate in the Midwest League, knowing full well how many people are dealing with more dire issues in Indiana and beyond. But it's tough sometimes for a minor league lifer used to the grind of a pocket schedule.

“There's been times, early on, I was really struggling with it,” Nutter said, “and shared that with some co-workers. I would say stress and anxiety for sure, started to probably broach on the depression. I don't use any of that lightly, but the point is, like, so much, overwhelming is the right thing.”

The uncertainty also weighs on players. The loss of a minor league season would be a tough blow for prospects, especially those just starting out in professional baseball. While major league organizations have more training possibilities than ever before, there is no substitute for live game situations.

MLB and its players' union are aiming to hold as many games as possible, offering a glimmer of possibility to some prospects who could be in the mix to help with a packed schedule.

“Hopefully they'll expand rosters or something like that for somebody like myself or whoever,” said Zach Short, an infielder in the Cubs' organization who reached Triple-A Iowa last summer. “And then just go with it.”

Short, from Kingston, New York, stayed in Arizona after training camp was cut short, sharing a house with fellow pros Ian Happ, Nico Hoerner and Dakota Mekkes from the Cubs. They work out and play tennis together to help stay ready.

Andre Nnebe, a minor leaguer in the Brewers' organization who expected to Class A ball this year, built a batting cage at his house in Oakland and ordered some basic gym equipment. He said he might try tying resistance bands to a tree to get in a strength workout.

“It’s kind of fun being creative with it and finding ways to get work," he said. "It’s probably the best way for me to pass time. There’s not much else to do right now.”

Looming in the background of the minors' tenuous situation is intermittent talks with MLB on a new development contract. The current Professional Baseball Agreement expires in September.

The National Association of Professional Baseball Leagues, the minor league governing body, is prepared to agree to MLB's proposal to cut the minimum of affiliations from 160 to 120 next year, a person familiar with the negotiations told The Associated Press. The person spoke Tuesday on condition of anonymity because no announcements were authorized.

“There have been no agreements on contraction or any other issues,” the National Association said in a statement, adding it “looks forward to continuing the good-faith negotiations with MLB tomorrow.”

The NAPBL's position almost assuredly was weakened by the prospect of little to no revenue coming in for 2020.

The negotiations bring “another level of uncertainty to the situation,” said Jason Freier, managing owner for Fort Wayne, Class A Columbia and Double-A Chattanooga. “As people are deciding further investments in their teams and things like this, I'm sure that every owner has to have that somewhere in their mind.”

Fort Wayne, Columbia and Chattanooga have avoided furloughs and layoffs, so far. Each of the teams was approved for a paycheck protection program loan from the U.S. government. Chattanooga, however, has been mentioned as one of the teams that might lose its affiliation.

As Nutter and company wait for a more definitive picture, the team president remembers the priorities he discussed during one of his last in-person staff meetings last month.

“We looked at everybody ... and we just said, ‘The single most important thing is everybody in this room,’” Nutter said. “'We love you guys. You're employees of ours. No. 1 is the people in this room and our families of course. No. 2 is like health benefits and things like that, and then we'll come up with the rest of the list later.'”