For Love and Hoffman, the wait for Olympic bobsled race ends 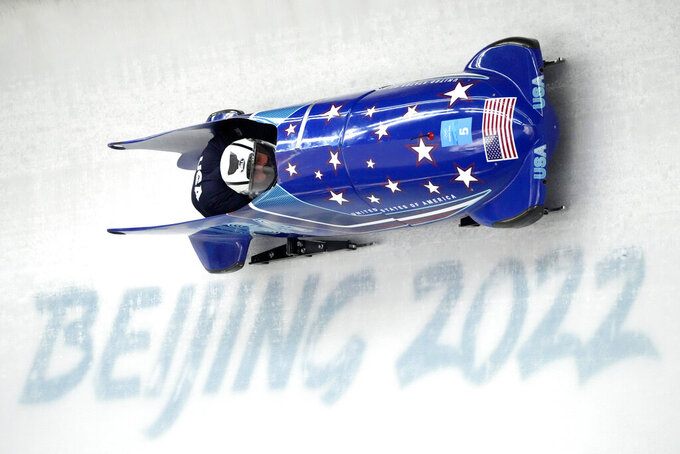 Elana Meyers Taylor of the United States speeds along the track during a 2-woman bobsled training at the 2022 Winter Olympics, Wednesday, Feb. 16, 2022, in the Yanqing district of Beijing. (AP Photo/Mark Schiefelbein) 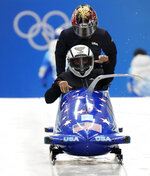 BEIJING (AP) — Depending on how you count, Kaysha Love and Sylvia Hoffman have waited a couple of weeks to make their debut at the Olympics.

Or a few months. Or a few years. Or, well, forever.

Whatever the number is, their wait is just about over. They’ll finally and officially become U.S. Olympians on Friday when the women’s bobsled competition starts at the Beijing Games, with Love pushing Kaillie Humphries’ sled and Hoffman pushing the sled piloted by Elana Meyers Taylor.

“I’m a big believer of not making the moment bigger than it is,” Love said. “This is the same rodeo, just a different show.”

She tries to make her story sound somewhat ordinary. So does Hoffman.

With all due respect, they’re both wildly underplaying their journeys here.

Love always thought her Olympic moment would be in gymnastics or track; she owns more than a dozen state high school records in her native Utah, plus ran in college at UNLV before coming to bobsled. She joined the sliding program after completing a virtual combine and getting the attention of the U.S. bobsled coaches.

Hoffman competed in weightlifting, track and field and volleyball, plus played college basketball at LSU-Shreveport., while Hoffman was discovered through the NBC program “Scouting Camp: The Next Olympic Hopeful” — a show she was on without a specific sport in mind. Turns out, those same bobsled coaches were watching.

The rest is history.

“I’m very grateful for that particular opportunity to just go out, do my best, to say, ‘Hey, I have what it takes, just let me know which sport is going to see my particular skill set and then let’s go all out for it,’” Hoffman said. “The bobsled coaches were there, they saw my talent and they said, ‘Come out. We think that you can be a really good asset to our team.’”

So were Love’s college and high school coaches, for that matter.

Love outgrew gymnastics, so to speak; she was 5-foot-7 around the time she was entering high school in Utah. Her attention moved to track and field, where she was quickly touted as someone with tons of potential. After a high school career filled with state titles and state records, Love moved on to UNLV — where one day, another coach told her that her combination of speed and power was tailor-made for bobsledding. And when it was said again in the fall of 2020, she finally listened.

Barely a year later, she was picked for the Beijing Games. And what she eventually realized was that her switch to track as a high school freshman was — unbeknownst to her — preparing her for bobsledding.

“Bobsled is a sport that transitions really well from track and field,” Love said. “If you had a great understanding of track and sprinting and how the mechanics of sprinting works, transitioning that over to bobsled isn’t as big of a jump as I may have thought it was going to be. I didn’t realize that I was training the last eight years and track in field for this moment.”

Love and Hoffman have many things in common — both have excelled in multiple sports, both have lived in warm places where bobsled might not be at the forefront of many minds.

And both know they are following in the footsteps of trailblazers.

There has been a tradition of Black women excelling for the U.S. in bobsled at the Olympics; Vonetta Flowers, Lauryn Williams, Lauren Gibbs, Aja Evans and Meyers Taylor (as both a driver and a pilot) have all won medals, and now Love and Hoffman have their turn.

“It’s a seeing-is-believing type of thing,” Hoffman said. “Most of the time, if we don’t see certain things happen, we may not believe that they can happen. But when you start seeing those paths to go for what you want, things tend to come to fruition.”

They are with two of the elite pilots in the world; both are four-time Olympic medalists, Humphries just won gold in Beijing in monobob, Meyers Taylor took the silver in that race. It will be difficult — German sleds have been flying in training — but the moment has finally arrived for Love and Hoffman.

“We’re in the exact same place, competing against the same girls, the same stuff we’ve been doing,” Love said. “My job’s easy. I’m just pushing Kaillie. It’s just that simple. Just trying to take it day by day, not overthink anything and just let it be what it’s going to be.”