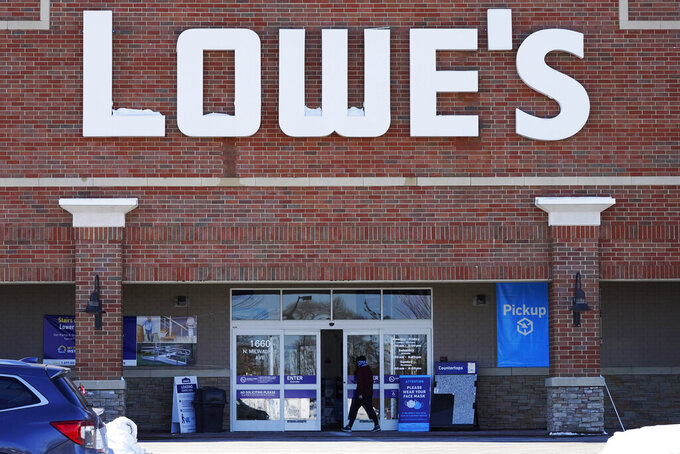 FILE - A customer covers face as he walks to a Lowe's home- improvement store in Vernon Hills, Ill., Wednesday, Feb. 3, 2021. Lowe’s Cos. extended its strong sales streak through the holiday season as customers kept investing in their homes during the pandemic. The nation’s second largest home improvement retailer behind Home Depot reported that fourth-quarter profits almost doubled from a year ago, while sales rose 27%. (AP Photo/Nam Y. Huh)

NEW YORK (AP) — Lowe’s Cos. extended its strong sales streak through the holiday season as customers kept investing in their homes during the pandemic.

The strong showing, announced Wednesday, followed results from Home Depot, which reported Tuesday that fourth-quarter sales surged 25%. Global sales at Home Depot stores open at least a year, a key indicator of a retailer’s health, climbed 24.5%, and by 25% if only U.S. stores are counted.

Home improvement stores have become hot destinations during the pandemic with millions working from home and attending school remotely. Many Americans have found the time to update or change their homes to add home offices and other elements.

“During the pandemic, the home has come to serve four primary purposes: a residence, a home school, a home office and a primary location for recreation and entertainment, “ Marvin Ellison, Lowe's CEO, told analysts during the earnings call Wednesday.

Ellison told The Associated Press in a separate call Wednesday that even when the risks of the pandemic fade, there are a number of factors that he believes will help prop up the housing market and therefore should continue to lift Lowe's and other home improvement businesses. Mortgage rates are low. There is a shortage of homes and the housing inventory is full of old houses that need repair, he noted.

Lowe's has been doing its part to drive sales and increase market share. Lowe's held a special bath and home organization promotional event in January that Ellison says resonated with consumers. But it's also revamped its website, tailored its stores to local markets and better catered to professional contractors. The company will also be adding special lockers — designed to store bulky products, for this group.

Against this environment, Lowe's, based in Mooresville, North Carolina, reported fiscal fourth-quarter net income of $978 million, or $1.32 per share, for the quarter ended Jan. 29. That compares with $509 million, or 66 cents per share, in the year-earlier period. Earnings, adjusted for restructuring costs for the latest period, were $1.33 per share.

The average estimate of 13 analysts surveyed by Zacks Investment Research was for earnings of $1.22 per share.

The home improvement retailer posted revenue of $20.31 billion in the period, compared with $16.03 billion in the year-earlier quarter. Eight analysts surveyed by Zacks expected $19.54 billion.