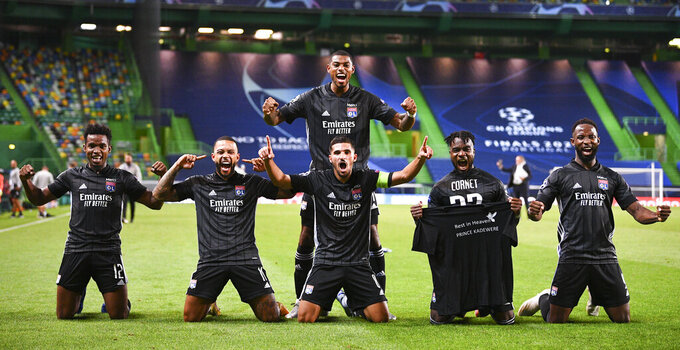 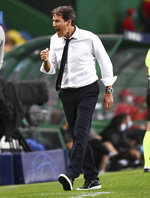 The modest French team pulled off its latest Champions League upset by defeating Man City and its high-profile players 3-1 in the quarterfinals, keeping alive its surprising title run in Europe’s top club competition.

It took another impressive collective performance, similar to the one that eliminated Cristiano Ronaldo’s Juventus in the round of 16, for Lyon to advance to its first Champions League semifinal in a decade.

It matched City throughout the first half and held strong in the second when the English club pressed harder. Lyon successfully took advantage of its opponent's mistakes, and capitalized on its late breakaways, to secure its spot in the last four.

“I’m proud of my players. We believed in ourselves,” Lyon coach Rudi Garcia said. “We knew we weren’t favorites and we were playing a top team. Above all our success was down to our team spirit. Everyone worked for each other and the substitutes helped a lot.”

The team that finished only seventh in the French league will now face yet another powerhouse, Bayern Munich, which is coming off a stunning 8-2 rout of Barcelona.

Lyon was eliminated by Bayern in the 2010 semifinals, when it lost 4-0 on aggregate to the German club, after the French team had beaten Real Madrid in the round of 16.

Moussa Dembélé was man of the match for Lyon on Saturday, scoring two late goals to seal the team’s return to the semifinals.

Ivory Coast forward Maxwel Cornet had opened the scoring in the first half to give Lyon the lead going into the break. Kevin De Bruyne equalized for Man City in the 69th before Dembélé got his double.

“If we’re where we are today, it’s not down to luck,” Cornet said. “We worked really hard in training before returning to competitive football. You could see that this evening as we all had energy and put the effort in for each other. It paid off and there are still two games to be played.”

Dutch forward Memphis Depay is a well-known player up front for Lyon, which has young Brazilian Bruno Guimarães anchoring the midfield and compatriots Fernando Marçal and Marcelo in defense, with Portugal’s Anthony Lopes in goal.

Lyon needs to win the Champions League this season to return to the tournament in 2020-21. Its seventh-place finish in the shortened French league left it out of any European competition next season.

Lyon has asked a court to reverse the decision to cancel the French league amid the coronavirus pandemic, saying teams had not played the same amount of games home and away or met the same opponents.

Lyon lost this year's League Cup final to Paris Saint-Germain in a penalty shootout. It was looking for its first trophy since the French Cup in 2012.