Macy’s Thanksgiving Day Parade to march on despite pandemic 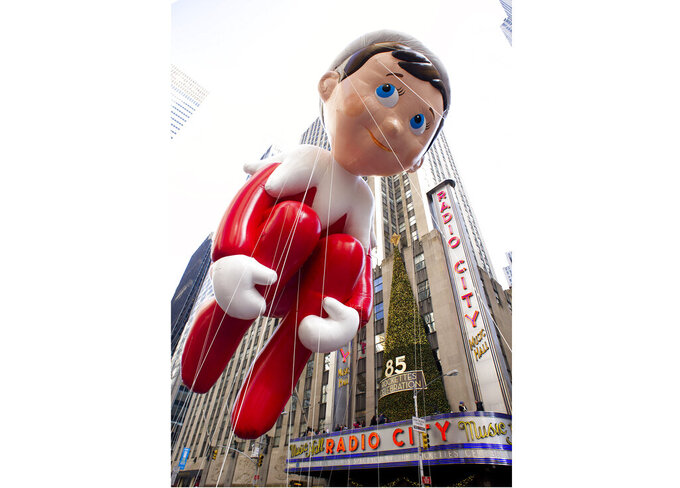 FILE - The Elf on the Shelf balloon floats in the Macy's Thanksgiving Day Parade in New York in New York on Nov. 22, 2012. The pandemic may have upended most traditions this holiday season but the annual New York City parade will still march on with balloons, dancers, floats, Broadway shows and Santa — albeit this time heavily tweaked for safety. (AP Photo/Charles Sykes, File)

NEW YORK (AP) — Jawan M. Jackson recently got to do something he's been yearning to do for months — sing and dance again with his Broadway cast.

Jackson is one of the stars of “Ain’t Too Proud — The Life and Times of The Temptations” and he reunited with castmates for the first time since theaters shuttered to prepare for the Macy’s Thanksgiving Day Parade on Thursday.

“I was most happy with just seeing all my old friends I haven’t seen in months, some who flew in specifically for the show to do this,” he said. “It was different, but it was still great to do.”

The pandemic, which shut down theaters in March, may have upended most traditions this holiday season, but the annual New York City parade will march on with balloons, dancers, floats, Broadway shows and Santa — albeit heavily edited for safety.

“Traditions like this are comforting and they’re uplifting,” said Susan Tercero, executive producer of the parade. “New York has always been a tough city. It bounces back. It takes its blows and then it continues on. And I think it’s extremely important for us to be that display this holiday season. Regardless of what’s happened, New York needs to be that beacon of light in the darkness and this parade, I think, is symbolic of that.”

The Macy’s parade has been a traditional holiday season kickoff for more than 90 years, and spectators often line up a half-dozen deep along the route to cheer about 8,000 marchers, two dozen floats, entertainers and marching bands. At last year's parade, the big fear was high wind. This time, it's a pandemic that has made crowds untenable.

The biggest change this year is that the usual 2 1/2-mile route through crowded Manhattan has been scrapped in favor of concentrating events to a one-block stretch of 34th Street in front of the retailer’s flagship Manhattan store. Many performances have been pre-taped and most of the parade’s performers will be locally based to cut down on travel.

In addition to “Ain’t Too Proud," the parade will feature performances from the Broadway casts of “Hamilton,” “Mean Girls” and “Jagged Little Pill,” a musical built around the music of Alanis Morissette. The Broadway performances were taped days before the parade.

Things felt a lot different for actor Derek Klena, who was in the 2017 parade as part of the cast of “Anastasia.” This year, he's Tony Award-nominated for his role in “Jagged Little Pill” and helped perform “You Learn” from the Tony-nominated show.

The cast was quarantined for two weeks before taping and tested regularly for the virus. Cast members rehearsed in masks until the moment cameras started rolling and kept socially distant. They sang live this time instead of years past when casts lip-synched.

"Although the circumstances were much different, it was still so magical and fulfilling to get to share that experience with your fellow castmates after being distant for so long," said Klena.

“I think it was important to everybody to find a way to still celebrate this event and celebrate the shows and the companies that all get to share in this amazing event.”

Both Jackson and Klena said everyone adhered to the show's strict safety protocols — enforcing the 6-foot rule, frequent testing and requiring face masks plus face shields, as well as a fresh mask after their performance. “I’m appreciative of it because it is built to keep you safe,” said Jackson, though he noted “dancing in a mask is a tough feat.”

This year's lineup of balloons includes Snoopy, “Diary of a Wimpy Kid,” “The Elf on the Shelf,” Chase from "Paw Patrol," Pikachu, the Pillsbury Doughboy, Ronald McDonald, SpongeBob SquarePants and “Trolls.” New this time are “The Boss Baby” and Red Titan from “Ryan’s World.”

The giant cartoon-character balloons will be flown without the traditional 80 to 100 rope-pulling handlers assigned to each inflatable and will instead be tethered to specialized vehicles.

Pentatonix, Ally Brooke, Keke Palmer, Sofia Carson, Leslie Odom Jr. and Jordin Sparks will perform, and there will be floats from “Blue’s Clues,” “Teenage Mutant Ninja Turtles" and Lego. There will be a New York City Ballet ballerina with a performance from “The Nutcracker,” an all-female samba drumline and acrobats from “The Big Apple Circus,” and the Rockettes will be out in force. The parade ends with an appearance from Santa Claus.

Another change this year was the decision to spotlight many of the New York City parades that were canceled in the spring and fall due to the pandemic — the St. Patrick’s Day Parade, the Mermaid Parade, the Puerto Rican Day Parade and NYC Pride March.

“We’re going to be highlighting them, and we’re going to be really giving them a chance to shine,” said Tercero. “You’re going to be able to see creativity in this entertainment come to life that has sort of been dormant for the past seven months.”

For the Broadway performers, there's a silver lining to the changes this year. Usually on Thanksgiving Day, they'd be freezing in Midtown, having woken at dawn and been dancing and singing for hours. This year, they get to watch themselves from the warmth of their apartments, a job already well done.

“It’s the first Thanksgiving in a few years where I either don’t have a show or I’m not taping something,” said Klena. “So in that way it’ll be kind of fun to just celebrate with some of my friends here in the city and my wife.”