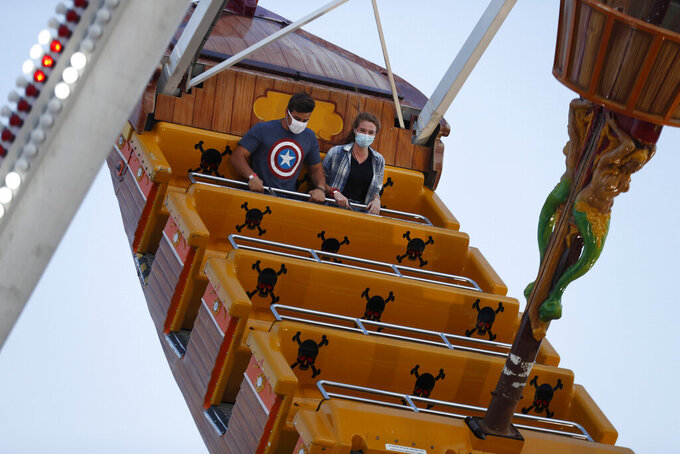 Riders wear masks on a nearly empty ride at the Palace Playland amusement park Wednesday, Aug. 5, 2020, at Old Orchard Beach, Maine. The park has reopened its arcade and but only a few of its rides as it abides by social distancing regulations to help prevent the spread of the coronavirus. (AP Photo/Robert F. Bukaty)

PORTLAND, Maine (AP) — Maine's Democratic governor has directed most state department heads to come up with 10% spending cuts to address revenue lost because of the coronavirus pandemic.

The departments have until Aug. 19 to submit their proposals to the administration of Gov. Janet Mills, the Bangor Daily News reported. Maine is facing a projected revenue shortfall of more than $1 billion over the next three years.

Kirsten Figueroa, the commissioner of the Maine Department of Administrative and Financial Services, wrote in a letter to the state department heads that the spending trims are prompted by the pandemic.

"Due to the economic impacts of the COVID-19 pandemic, Maine state government will have to make significant fiscal changes for both the current year and the upcoming biennium," the letter said.

Figueroa's letter states the Mills administration is considering curtailment options. Curtailment is the act of reserving funding rather than spending it so it can be used to cover a budget shortfall. The Maine Constitution requires a balanced budget, and curtailment is an option to reduce spending in the face of a shortfall.

Maine's projected revenue is down more than $500 million for the 2021 fiscal year alone. Lack of sales and use taxes during the pandemic have contributed to the loss of money.

Shah said officials are monitoring the status of the pandemic in states whose residents have been afforded relaxed travel restrictions in Maine. Maine has exempted residents from five states from its testing and 14-day quarantine requirement.

There are worrying trends in some of those states, Shah said. New Jersey, which is exempted, has had an average of 386 coronavirus cases per day. That's an increase of more than 70% from two weeks ago.

Maine public health authorities reported 14 new cases of the virus on Thursday. The state has had more than 3,900 reported cases and 124 deaths because of the virus.

The federal government is canceling a research survey about New England's imperiled shrimp fishery because of challenges caused by the coronavirus pandemic.

The Maine shrimp fishery has been shut down for several years because of concerns such as poor survival of young. Scientists have said environmental conditions in the Gulf of Maine have put the future of the fishery at risk.

The National Oceanic and Atmospheric Administration was scheduled to perform a research survey about the fishery this year, but announced its cancellation this week. The agency said it's also canceling a handful of other research surveys off the East Coast and Gulf Coast because of “uncertainties created by the COVID-19 pandemic and the unique challenges those are creating for NOAA Fisheries.”

The shrimp were once a popular winter seafood item. Fishermen also harvested them in Massachusetts and New Hampshire.