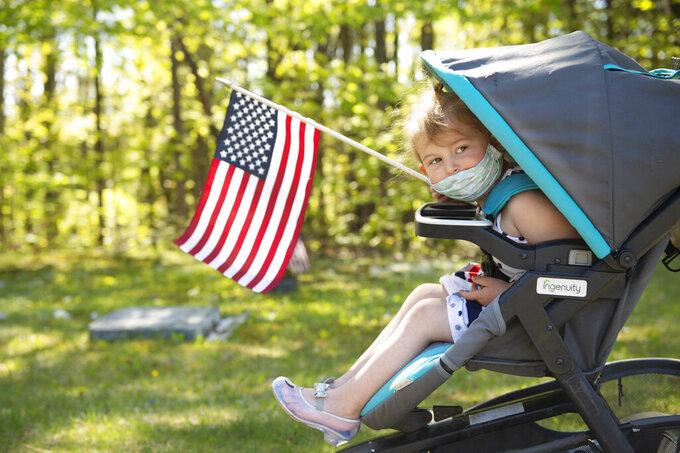 Anna Wines, 3, of Bath, Maine, helps carry American flags while her family places new flags next to the gravestone of each veteran at Riverside Cemetery in Lewiston, Maine, Thursday, May 21, 2020. Volunteers will place nearly 7,500 new flags near veterans' graves at the 13 cemeteries across Lewiston, Maine, by Memorial Day. (Daryn Slover/Sun Journal via AP)

AUGUSTA, Maine (AP) — Maine Gov. Janet Mills ordered flags lowered to half-staff Friday as she expressed appreciation for the state’s military veterans — and invoked their courage in the state’s current battle against an unseen enemy.

The governor spoke about Mainers who served in past military conflicts and said Mainers will rise up to the occasion in battling the new coronavirus, which had claimed 75 Mainers as of Friday.

She noted that at least 10 military veterans were among the victims of the new coronavirus in Maine.

“We are facing an enemy that is real but unseen, as sure a killer as any enemy we have ever fought in our national history,” she said. “We are all soldiers in this fight,” she added.

She encouraged Mainers to do their part. She said that includes wearing masks when social distancing isn't possible.

Flags were being lowered from Friday through Sunday for coronavirus victims. They'll remain lowered Monday to honor military service members who lost their lives in military service.

Two more people have died and 71 others have tested positive for the new coronavirus in Maine, officials said Friday.

For most people, the virus causes only mild or moderate symptoms, such as fever and cough. For some, especially older adults and people with existing health problems, it can cause more severe illness including pneumonia, or death. The vast majority recover.

Maine labor officials said Friday the state experienced its sharpest surge in unemployment in its history in April as companies shed jobs amid the coronavirus pandemic.

The state had a 10.6% unemployment rate in April, the highest on record, the Maine Department of Labor said. The 7.4 percentage point increase was also the largest for a one- or two-month period under the current methodology, which was adopted in the 1970s, department said.

The trends in Maine were similar to those around the country, which transitioned to widespread stay-at-home orders and social distancing measures in March and April. The U.S. unemployment rate was 14.7%.

The Maine labor department said in a statement the numbers still do not “fully reflect the magnitude of job loss that has occurred,” because the coronavirus pandemic has disrupted the labor market in many ways.

Sales of single-family homes are also down because of the pandemic, but the value of the homes that sold actually grew last month.

Most real estate transactions take 30 to 45 days to close, so contracts written before the pandemic have now been completed, said Tom Cole, president of the Maine Association of Realtors.

Buyers remain plentiful even though the current inventory of homes is down 19% compared to a year ago.

More tests have been completed at the Maine Correctional Center, and a second inmate has tested positive, officials said Friday.

All told, nearly 600 tests have been completed for staff, inmates and contracted vendors, the Department of Corrections said. More than 100 tests were still pending.

Both inmates who tested are in isolation, and their units where they were living prior to be diagnosed were locked down.

The Maine Center for Disease Control and Prevention plans to begin providing more data on the coronavirus soon.

The agency “in the coming days” will begin providing information on new and active cases at the town level, or perhaps even on a more “granular” level than that, said Dr. Nirav Shah, the Maine CDC director. The state currently breaks down the testing data by county.

Organizers announced Friday that the Great State of Maine Air Show has been canceled.

Air show officials were eager to find a way to make the event work, but they were notified that the state's ban on gatherings greater than 50 people would remain through August.

The air show featuring the Navy Blue Angels and other aerial acts had been scheduled for Aug. 15-16 in Brunswick.

This story has been corrected to show that the Maine Center for Disease Control revised the number of deaths to two, not three, for a total of 75, not 76.