Maine lawmaker to miss swearing in because of COVID-19 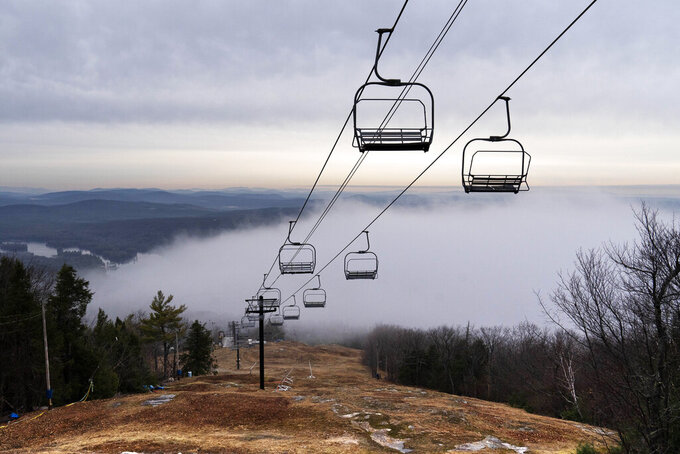 Valley fog builds below a chairlift on the slopes at Shawnee Peak, Monday, Nov. 30, 2020, in Bridgton, Maine. Ski areas in Maine have been implementing modifications to meet state COVID-19 safety protocols. Among the changes at Shawnee Peak will be new sheltered outdoor food service and extended dining capacity. Alpine skiing in Maine has an estimated economic impact of $1 billion annually, according to the Ski Maine Association. (AP Photo/Robert F. Bukaty)

PORTLAND, Maine (AP) — The Maine Legislature will be missing at least one member because of COVID-19 when lawmakers convene this week.

Republican Sen.-elect Rick Bennett, of Oxford, announced Sunday on social media that he tested positive for the virus, and will be quarantining at least through Dec. 12. He said he’s experiencing mild symptoms including a sore throat, aches and fatigue.

The Maine Legislature is convening Wednesday at the Augusta Civic Center to provide adequate space for social distancing during the pandemic.

Bennett is one of the newly elected lawmakers, but he’s not new to the Legislature.

He previously served in the House and Senate, and was Senate president under a unique power-sharing arrangement when the Senate was evenly divided. He's also a former chairman of the Maine Republican Party who served as an elector for President Donald Trump in 2016.

The latest average positivity rate in Maine is 2.51%. State health departments are calculating positivity rate differently across the country, but for Maine the AP calculates the rate by dividing new cases by test specimens using data from The COVID Tracking Project.

Public health authorities in Maine have reported more than 11,700 positive cases of the virus and 194 deaths.

Maine Center for Disease Control and Prevention Director Dr. Nirav Shah said the state's trajectory is similar to most of the U.S., though the growth of cases isn't as intense as it is in some parts of the country, such as the upper Midwest.

“The levels of community transmissions are just higher now, and in infectious diseases, where you start largely governs the direction that you follow,” he said.

The federal Small Business Administration is asking Mainers to shop small in 2020 because of the coronavirus pandemic.

The agency scaled back its typical Small Business Saturday efforts this year, but said it remains important for residents to support local businesses during the holiday season.

Maine has more than 13,000 small retail businesses and they employ more than 36,000 people, the agency said.

“There are more options to shop online with local small businesses, many are offering curb side services, and several chambers and downtown groups have modified their normal early bird or late night shopping events to continue throughout the entire holiday season,” the agency said in a statement.