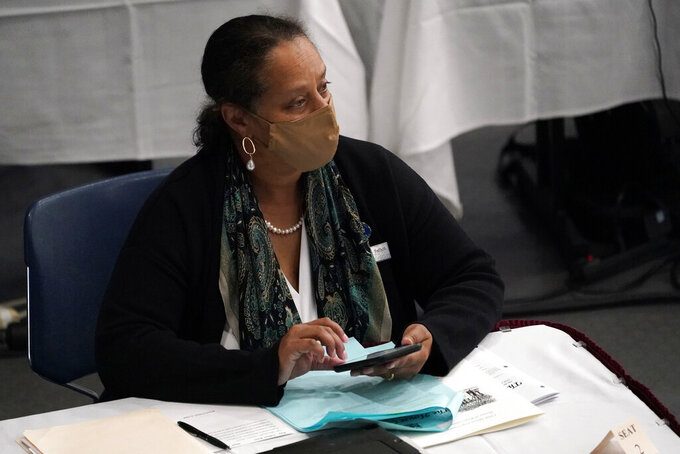 AUGUSTA, Maine (AP) — With Gov. Janet Mills in quarantine Wednesday, Maine lawmakers were sworn into office by the state’s chief justice to open a historic session at the Augusta Civic Center that featured the state’s first openly gay House speaker, the first woman to serve as secretary of state, and the first Black woman in a party leadership position.

“Much has been made of my relative youthfulness, and I’m going to embrace that. Because Mainers know we must attract and retain young people to fuel our economy, to rebuild our workforce and to ignite a bright future for our state,” Fecteau told fellow lawmakers.

Mills, a Democrat, delivered a video message urging lawmakers to put safety first as they gathered at the civic center, where the session was moved from the Statehouse to ensure adequate space for social distancing to prevent the spread of the coronavirus, which is surging in the state.

Mills told lawmakers that she feels well and is displaying no symptoms of COVID-19 after exposure to a member of her security detail who tested positive for the the virus and was displaying symptoms.

“I hope this serves as another reminder to all of us. As we’ve said all along, no one is immune to the spread and impact of the virus. Please stay safe. That’s the most immediate challenge before us — stemming the tide of the virus, protecting the health of Maine people, and charting a path for Maine’s economic recovery,” Mills said on the video, a day after the state recorded a single-day high of 20 COVID-19 deaths.

The nation’s political divide was on full display outside the building where demonstrators chanted and waved signs attacking restrictions imposed during the pandemic. Some held “Stop the steal!” signs referencing unsubstantiated claims of widespread fraud in the election of Democrat President-elect Joe Biden.

Inside, all were screened for COVID-19 symptoms, and lawmakers in both chambers were seated at least 6 feet apart. They wore masks or face shields, and each had a tablet to register their votes.

It was the first time the Legislature met since lawmakers adjourned because of the pandemic in March.

One lawmaker missed the session because of COVID-19. Sen.-elect Rick Bennett, R-Oxford, announced over the weekend that he contracted the virus and is quarantining in his home.

Difficult work on shoring up the budget will wait until January. Mills has found a number of one-time budget savings to balance the budget that ends in June, but many need legislative approval.

Mills brushed aside a request by Republicans to rescind emergency orders in place during the quarantine.

She said during a COVID-19 briefing conducted remotely that rescinding the emergency declarations would jeopardize federal help that benefited the state during the pandemic. She said she’s “not going to let the people of Maine down by pretending their isn’t an emergency.”

Both chambers are controlled by Democrats, so there was little drama in the selection of leaders.

Sen. Troy Jackson, D-Allagash, was chosen to serve another term as Senate president and urged lawmakers “to put the hostility of the election behind us and work together for the sake of our health and our economic recovery.”

In the House, Fecteau, D-Biddeford, has been a forceful voice on issues important to the LGBTQ community, helping to ban so-called conversion therapy. He also pressed for construction of more affordable housing.

Later, lawmakers selected Bellows, D-Manchester, to succeed Secretary of State Matthew Dunlap, who was termed out. Dunlap, in turn, was selected to serve as auditor, and Attorney General Aaron Frey and State Treasurer Henry Beck were selected to serve an additional term.

The meeting was held at the 49,000-square-foot Augusta Civic Center to ensure plenty of distance.

It’s unclear based on journals and legislative records if lawmakers have previously met outside the current Statehouse, which was completed in 1832, according to the Law and Legislative Reference Library.

It’s possible that lawmakers met elsewhere when the Statehouse was renovated from 1909 to 1911, researchers said.