With majors later, Woods should be in no hurry to return 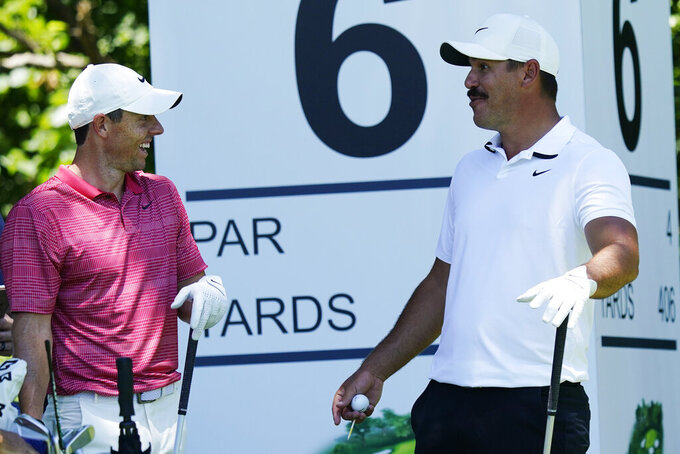 Rory McIlroy, of Northern Ireland, chats with Brooks Koepka, right, before teeing off on the sixth hole during the first round of the Charles Schwab Challenge golf tournament at the Colonial Country Club in Fort Worth, Texas, Thursday, June 11, 2020. (AP Photo/David J. Phillip)

HILTON HEAD ISLAND, S.C. (AP) — When it comes to Tiger Woods returning to the PGA Tour, it’s all about the calendar.

Nothing raised hopes that he would be at Hilton Head like a website tracking yachts that showed his Privacy on its way to Sea Island off the Georgia coast, about 80 miles south of the RBC Heritage, this week.

Woods played Hilton Head only in 1999 (he tied for 18th), but this is a different kind of year.

Then again, it’s also the 13th birthday of his daughter on Thursday, and that’s likely what Woods was doing around Sea Island.

But there’s more to the calendar, and there’s no need for Woods to be in any rush.

True, the PGA Tour has been shut down since March 12 because of the COVID-19 pandemic. Everyone at Colonial was eager to get back to the competition, and some mentioned a need to start making up for lost ground.

“Guys are looking to get off to a fast start because it’s actually a fast finish to the season,” Jordan Spieth said. He was referring to 10 tournaments on the schedule before the FedEx Cup postseason begins, 12 tournaments before Ryder Cup qualifying ends (if it’s played).

None of that is likely to be a priority for Woods.

The focus figures to be primarily on the majors, and those are all in the back end of the year. The PGA Championship is Aug. 6-19, the U.S. Open is Sept. 17-20 and the Masters is Nov. 12-15. So even now, the first major is just under two months away.

Woods has never played the Travelers Championship and is unlikely to play the Rocket Mortgage Classic — remember, Quicken Loans ended its involvement with the Tiger Woods Foundation and started a new tournament in Detroit.

If he returns at Memorial, which would be the logical return, that means five months without competing on the PGA Tour.

But then, what’s the rush?

The LPGA Tour is moving back by one week the restart of its season and adding another tournament.

Ultimately, it means a lot of professional golf for Northwest Ohio.

The LPGA says the Marathon Classic, originally scheduled for July 23-26 in Sylvania, a Toledo suburb, will now be Aug. 6-9. It will have spectators at Highland Meadows following recent approval by Ohio’s governor. Meanwhile, the LPGA will host a new 54-hole event called the LPGA Drive On Championship at Inverness Club in Toledo, on July 31 to Aug. 2.

Inverness, where Paul Azinger won the 1993 PGA Championship, is hosting the Solheim Cup next year.

The new event is to give LPGA members an additional playing opportunity during a shortened season. It will have 144 players and a $1 million purse and will be held without sponsors, pro-ams or spectators.

That means Ohio will have back-to-back PGA Tour events at Muirfield Village from July 9-19, and after a week break, back-to-back events on the LPGA Tour.

C.T. Pan never thought he would have a chance to defend his title at Hilton Head, so he was thrilled to see it back on the reconfigured schedule.

And he felt good about playing.

Pan was the first player to show how concerned he was about COVID-19 when he withdrew before the first round of The Players Championship. The PGA Tour announced later in the day that no fans would be allowed the rest of the week, and the next day it began canceling tournaments in a shutdown that last three months.

“It was a really tough decision. In my whole career, including junior golf, I’ve never withdrawn from a tournament,” Pan said Tuesday. “I think the tour has put out so much efforts the last two months to create a safe environment for us to play. Last week I was totally impressed by how they do things.”

As for the travel? No problem.

Pan said he and his wife bought an RV so they don’t have to fly.

Golf loses another longtime tradition on Sunday with the U.S. Open having moved to September because of the COVID-19 pandemic.

That ends 44 consecutive years the U.S. Open has been played on Father’s Day, dating to 1975 at Medinah. Father’s Day was on June 15 that year, and the tournament went to a Monday playoff as Lou Graham beat John Mahaffey.

What's curious about that is the U.S. Open finished on Father’s Day when it went to a four-day tournament in 1965. The previous year, the 36-hole final was on a Saturday.

Michael Trostel at the USGA believes it might be related to the fact that while Father’s Day was first celebrated in 1910, it was not recognized by Congress until 1972, and U.S. Open venues are decided years before they are played.

Minutes from the USGA executive committee by senior historian Victoria Nenno seem to bear that out.

The committee on Jan. 27, 1972, discussed potential sites for the 1975 and 1976 championships, with the acting chairman leading toward Chicago in 1975, preferrably Medinah.

In a letter to the executive committee dated April 24, 1972 — the day Congress passed a resolution recognizing Father’s Day as an official holiday — championship director Frank Hannigan discussed an invitation to host the 1975 U.S. Open at Medinah. A month later, the USGA announced it was going to Medinah.

One week after Father’s Day.

Bubba Watson used to watch “The Dukes of Hazzard,” and among the toys he bought with his PGA Tour success was General Lee, a 1969 Dodge Charger that was featured in the TV series. He even drove it into the parking lot at the Phoenix Open in 2012.

With so much civil unrest over racial injustice, Watson now wants to give it to a museum.

He already painted over the confederate flag on the top of the car in 2015.

“We’d love to give it to a museum because we believe that it’s TV history,” Watson said at Colonial. “It’s nothing against race on that show. I didn’t buy the car based on race. I bought it based on my family, me and my dad, me and my mom watching that show, but obviously there’s no flags around that car. The flags have been removed from that car.”

The first of two straight tournaments at Muirfield Village will be called the Workday Charity Open, with the title sponsor pledging $1 million to the Nationwide Children’s Hospital in Columbus, Ohio, and $500,000 to the “Eat. Learn. Play. Foundation” in Oakland, California. The purse will be $6.2 million.

Muirfield Village will host the Memorial the following week, with its regular status of 120 players and a $9.3 million purse.

Workday stepped in as title sponsor of a new event that week when the John Deere Classic was canceled for this year. The Deere returns to the schedule next year.

Two teams of athletes, celebrities and executives — including Morgan Pressel, Tiffany Joh and LPGA Commissioner Mike Whan — will have a live ride with Peloton host Alex Toussaint on Saturday in a race for charity. One team represents “PGA Works,” which is geared toward acceptance and inclusion in golf. The other will ride for LPGA-USGA Girls Golf and the Renee Powell Grant, which provides access to young children in black communities. Pledges can be made to teams at www.raceforunity.com . ... The return of the PGA Tour to network TV attracted 3.091 million viewers, up 50% from last year. The national average household rating was 2.1 with a 6 share, also a 50% increase. ... Golf Canada has canceled all its amateur competition for the rest of 2020. It would have been the 107th edition of the Canadian Women's Amateur and the 116th playing of the Canadian Men's Amateur.

Jim Furyk is the only player since 2009 to be outside the top 200 in the FedEx Cup with nine weeks left in the regular season and make it to the playoffs. Brooks Koepka is at No. 204 going into the RBC Heritage.

“My hat size didn’t change. There’s not very many muscles up here that I can train around the brain.” — Bryson DeChambeau, who has gone up two shirt sizes in his bid to get stronger.