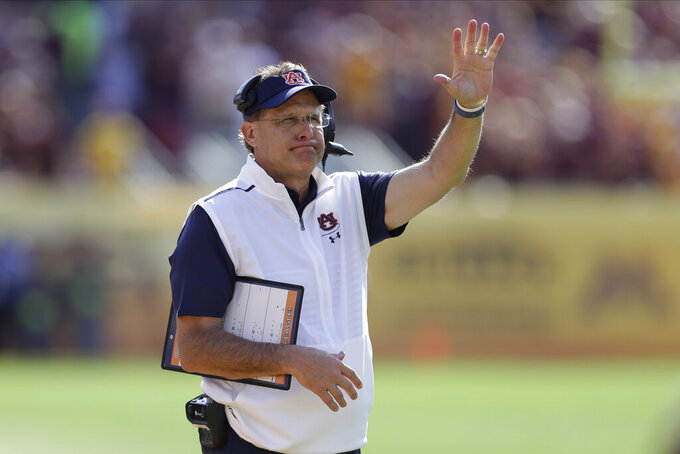 AUBURN, Ala. (AP) — Coach Gus Malzahn said No. 11 Auburn had five starters out of practice this week because of COVID-19-related issues.

Malzahn said Saturday the Tigers had two new positive tests this week and 10 total players are sidelined from practice because of the virus or close contact. He didn’t identify the players and declined to say if a particular position group had been hit hardest.

Auburn opens the season Sept. 26 against Kentucky and is set to begin specific game preparation on Sunday.

“All those guys will be back for the opener,” Malzahn said. But he noted that they will face challenges in getting ready when they are out until game week.

“You’re sitting here two weeks from kick and you’ve got some of your guys who aren’t practicing,” Malzahn said. “Obviously that’s concerning.”

“I think we’ve done an excellent job if you look at the last three weeks as far as the number of positives,” the coach said. “The challenge is close contact. And that’s something that is a big emphasis for us, but I know that it’s a big emphasis for everybody.

“We’ve really educated our guys. We’ve told them what they’ve got to do.”

Malzahn was asked what his backup plan for coaching a game if he's sidelined by COVID. He cited his longtime friend, Liberty's Hugh Freeze, who coached from a hospital bed in the coaches' booth against Syracuse two weeks after undergoing surgery for a staph infection.

“One thing that I’ve already kind of got my mind on is, if I did, figure out a way in an isolated place in the stadium or Zoom in,” Malzahn said. "I know my buddy Hugh Freeze coached last year laying down in a hospital bed. That’s the way I’m looking at it.

"I’m going to figure out a way either through technology or isolation to still do it.”