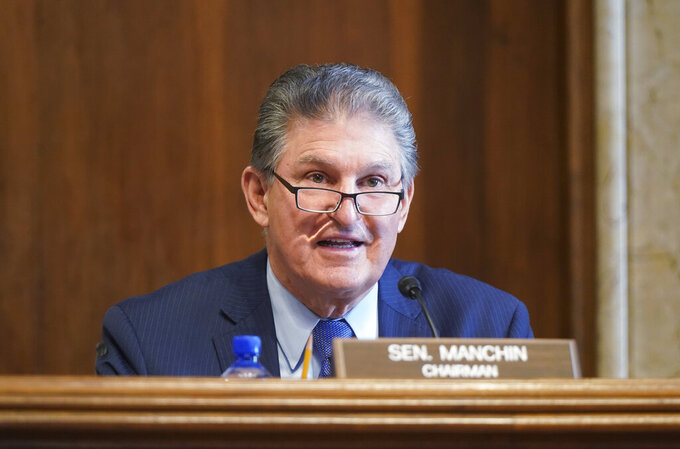 FILE - In this Feb. 24, 2021, file photo, Sen. Joe Manchin, D-W.Va., speaks during a Senate Committee on Energy and Natural Resources hearing on the nomination of Rep. Debra Haaland, D-N.M., to be Secretary of the Interior on Capitol Hill in Washington. (Leigh Vogel/Pool via AP, File)

CHARLESTON, W.Va. (AP) — West Virginia has long proclaimed itself “Almost Heaven,” a nod to a song and soaring mountaintop vistas. Now some joke the state name-checked in “Take Me Home, Country Roads” could take things up a notch as Democratic U.S. Sen Joe Manchin bargains his way through Congress.

Reviving West Virginia’s economically battered coal towns and reversing a persistent population decline is a tall order. But Manchin, who grew up in the mountain town of Farmington, has emerged as a key swing vote in a divided Senate. Now he has his best shot in years to steer federal dollars back home.

Manchin put himself in the middle of things again this week over the COVID relief bill making its way through Congress, singlehandedly halting work on the measure Friday as Democrats sought to placate his concerns about the size and duration of an expanded unemployment benefit.

As for his own agenda, Manchin has dropped hints publicly about “common sense” infrastructure investments sorely needed back home: expanding rural broadband and fixing roads among them. He declared that West Virginia could supply the manufacturing firepower to “innovate our way to a cleaner climate.” And more than once, he's said coal miners can build the best solar panels if given a chance.

Some wonder if his newfound clout might help him do something former President Donald Trump promised but couldn’t deliver — reignite a state economy long overly dependent on a coal industry in freefall.

Manchin's Senate colleagues have good reason to study the needs of small towns beyond the Blue Ridge Mountains. Manchin, 73, was already a recognized dealmaker on Capitol Hill, but deference to the most conservative Democrat in a 50-50 Senate has ratcheted up since November. A senator from Hawaii recently teased him as “your highness.” The guessing game of which way he'll vote has become fodder for late night television.

Not since Robert Byrd’s death in 2010 has a senator from West Virginia wielded this much influence. Over half a century, Byrd brought home billions of dollars in federal buildings, landmarks and roads, many bearing his name.

“This is hardscrabble country, man — our population is dropping, the demise of coal,” said Casey, an attorney and former chair of the state Democratic Party. “We got a guy now who can maybe do something legacy-wise. And I think there’s a lot of hope and some expectation that Joe’s going to do things that are significant, exceptional.”

Pam Garrison, a retired cashier, said she told Manchin at a meeting seeking a $15 federal minimum wage that Byrd has universities and hospitals named after him because “when he got into power, he used that power for the good of the people.”

“If you do what’s good for the people, even after you’re gone, you’re going to be remembered.”

Manchin, though, sees himself not as a seeker of pork-barrel projects but as a champion for policies that aid Appalachia and the Rust Belt.

“What we have to do now, and I think it’s appropriate — we show the need, and that the base has been left behind,” he said.

He started down that road by joining Michigan Democratic Sen. Debbie Stabenow in co-sponsoring a proposal for $8 billion in tax credits to boost clean energy manufacturing for coal communities and the auto industry.

Robert Rupp, a political history professor at West Virginia Wesleyan College, says Manchin can use his position in a 50-50 Senate to put his small state in the forefront of everyone’s mind.

“He’s at the center of attention, and he could assert power,” Rupp said.

A former governor, Manchin has deep roots in West Virginia politics. That helps explain why he is the last Democrat to hold statewide office in a state Trump carried twice by large margins.

Manchin maintains an air of unpredictability. He opposed a $15 minimum wage provision in the $1.9 billion pandemic stimulus package, even after activists rallied outside his state office in Charleston, leaving some to question his future legacy.

Days later, the Senate parliamentarian ruled an increase couldn’t be included in the COVID-19 relief bill. That was a win for Manchin and his reverence for Senate customs, including the filibuster, which helps sustain a 60-vote hurdle to advancing most legislation.

Manchin has vowed never to support ending the filibuster.

On a recent morning in Charleston outside the golden-domed state Capitol, saving it was a rallying cry for anti-abortion advocates, who held signs stating, “Thank you Senator Manchin.”

“We need to encourage him to stand strong,” said Marilyn Musgrave, who works for the Susan B. Anthony List, an anti-abortion nonprofit.

Musgrave's group looks to Manchin now after campaigning against his 2018 bid for a second full term, which he won with just under 50% of the vote. Manchin opposes public funding for abortions but stops short of supporting an outright ban. Still, he typically scores a low rating from abortion-rights groups, which puts him more in line with West Virginians who collectively have sent mixed signals on abortion.

With his centrist instincts in such a red state, Manchin has occasionally been the subject of rumors he'll switch parties.

“Republicans kind of have this day-dream that just because he’s conservative on some issues that would mean he would jump parties,” Rupp said.

That's unlikely, especially given Manchin's newfound clout, he said. And that's fine with Matt Kerner, a 54-year-old West Virginian who wants Manchin to never forget that 16% of the people in his state live below the poverty line, the sixth-highest rate in the nation, according to the U.S. Census.

“We're hoping Senator Manchin remembers that he represents some of the poorest people in this country,” Kerner said.