Manchin, a moderate, urged not to compromise on a $15 wage 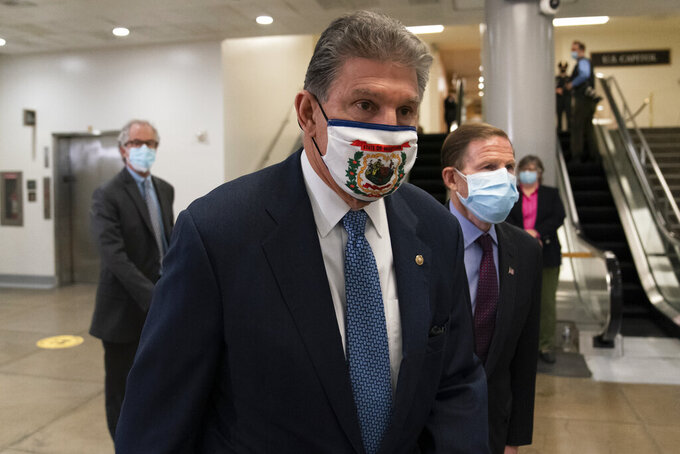 CHARLESTON, W.Va. (AP) — Advocates for a $15 minimum wage said Thursday that Democratic U.S. Sen. Joe Manchin told them he was more open to a compromise that would raise the federal standard to $11.

Manchin met virtually with the Poor People's Campaign and workers from his state of West Virginia. They pressed him, despite his opposition, on supporting an increase to the federal minimum wage through Congress' next pandemic relief package.

House Democrats have advanced a proposal that would gradually raise the federal minimum wage to $15 an hour. But its future is uncertain in the Senate, where Manchin is one of the crucial moderate Democrats who can make or break proposals from his party's progressive wing.

President Joe Biden supports a $15 minimum wage but has acknowledged that he will likely have to omit the measure from the $1.9 trillion COVID-19 financial relief package he is proposing and reintroduce it later as a separate bill.

Advocates and workers, many who said they have struggled to get by on a minimum wage for decades, said Manchin listened to their concerns. But Manchin has said he only backs an increase from the current $7.25 to $11.

“We're not interested in compromise,” said Rev. Dr. William J. Barber II, co-chair of the Poor People’s Campaign, in a Zoom press conference after talking with Manchin. "The $15 is a compromise.”

Sam Runyon, a spokeswoman for Manchin, wrote in an email that the senator “appreciated the opportunity to meet with Bishop Barber and members of the Poor People’s Campaign to discuss the issues most important to them."

The Poor People's Campaign is planning a rally next Monday in several states, including West Virginia and Arizona.

Arizona is represented by another moderate Democrat, Kyrsten Sinema, who opposes the $15 minimum wage provision in the COVID-19 package.

Barber said opposing the wage increase would be “betraying” the promises of the Democratic Party platform.

Just this month, the nonpartisan Congressional Budget Office estimated that while raising the minimum wage to $15 by 2025 would increase pay for 17 million people and lift 900,000 out of poverty, it would also end 1.4 million jobs. The reasoning is that employers would cut jobs to make up for their higher labor costs.

Workers in West Virginia who spoke to reporters after meeting with Manchin said such a wage hike would drastically improve their livelihoods and give them more spending power to support local businesses.

“If it was $15 an hour, I could afford to live on my own," said Brianna Griffith, a tipped worker in southern West Virginia who said she moved in with her grandmother after losing her job at the start of the pandemic. "I could afford to buy a car that's not 25 years old. We just really need help here.”