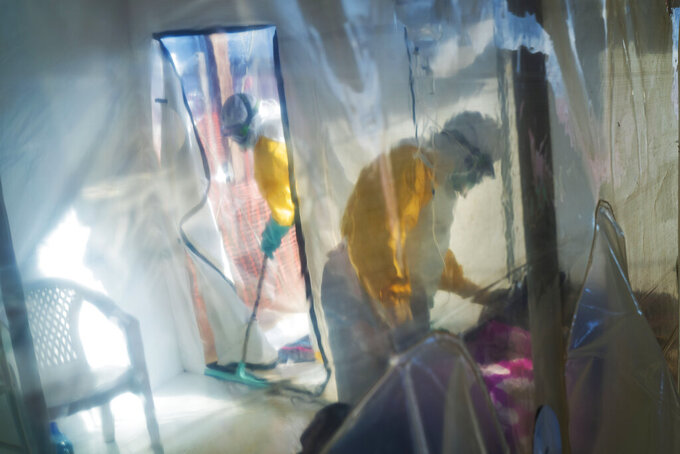 FILE - In this July 13, 2019 file photo, health workers wearing protective suits tend to an Ebola victim kept in an isolation cube in Beni, Congo. According to a report published in the New England Journal of Medicine on Wednesday, March 31, 2021, an African man who developed Ebola despite receiving a vaccine recovered, but he suffered a relapse nearly six months later that led to 91 new cases before he died. The report adds to evidence that the deadly virus can lurk in the body long after symptoms end, and that survivors need monitoring for their own welfare and to prevent spread. (AP Photo/Jerome Delay, File)

A man in Africa who developed Ebola despite receiving a vaccine recovered but suffered a relapse nearly six months later that led to 91 new cases before he died. The report adds to evidence that the deadly virus can lurk in the body long after symptoms end, and that survivors need monitoring for their own welfare and to prevent spread.

Relapses like this one from the 2018-2020 outbreak in the Democratic Republic of Congo are thought to be rare. This is the first one clearly shown to have spawned a large cluster of new cases. The New England Journal of Medicine published details on Wednesday.

Earlier this month, scientists said a separate outbreak that’s going on now in Guinea seems related to one in West Africa that ended five years ago. A survivor may have silently harbored the virus for years before spreading it.

“The most important message is, someone can get the disease, Ebola, twice and the second illness can sometimes be worse than the first one,” said Dr. Placide Mbala-Kingebeni of the University of Kinshasha, who helped research the Congo cases.

As more Ebola outbreaks occur, “we are getting more and more survivors” and the risk posed by relapses is growing, he said.

Ebola outbreaks usually start when someone gets the virus from wildlife and it then spreads person to person through contact with bodily fluids or contaminated materials. Symptoms can include sudden fever, muscle pain, headache, sore throat, vomiting, diarrhea, rash and bleeding. Fatality rates range from 25% to 90%.

The case in the medical journal involved a 25-year-old motorcycle taxi driver vaccinated in December 2018 because he’d been in contact with someone with Ebola. In June 2019, he developed symptoms and was diagnosed with the disease.

For some reason, the man never developed immunity or lost it within six months, said Michael Wiley, a virus expert at Nebraska Medical Center who helped investigate the case.

The man was treated and discharged after twice testing negative for Ebola in his blood. However, semen can harbor the virus for more than a year, so men are advised to be tested periodically after recovery. The man had a negative semen test in August but did not return after that.

In late November, he again developed symptoms and sought care at a health center and from a traditional healer. After worsening, he was sent to a specialized Ebola treatment unit but died the next day.

Gene tests showed the virus from his new illness was nearly identical to his original one, meaning this was a relapse, not a new infection from another person or an animal, Wiley said. Tests showed the man had spread the virus to 29 others and they spread it to 62 more.

Previously, two health workers who got Ebola while treating patients in Africa were found to have the virus long after they recovered — a Scottish nurse in her spinal fluid and American physician Ian Crozier in his eyes. But those relapses were discovered quickly and did not spawn new outbreaks.

They and the man in Africa all were treated with antibodies during their initial infections. Antibodies are substances the body makes to fight the virus but it can take weeks for the most effective ones to form. Giving them to Ebola patients is thought to boost the immune system, and studies suggest they improve survival. But the relapses have doctors concerned that such patients might not develop a strong enough immune response on their own and might be vulnerable to recurrences once antibodies fade. It’s just a theory at this point, the researchers stressed.

A few other viruses can lurk for long periods and cause problems later, such as the one responsible for chickenpox, which can reactivate and cause shingles decades after initial infection.

The news about latent Ebola tells us “absolutely nothing” about the chance of something similar happening with the bug that causes COVID-19 because “they’re totally different viruses,” Wiley said.

“We haven’t seen yet this kind of latency from people who survived coronavirus,” he said. Even with Ebola, “after six months, most of the patients completely clear the virus.”

The biggest concern is better monitoring for survivors -- there are more than 1,100 in the Congo alone, and the WHO recommends monitoring for at least two years.

“We need to make sure that survivors are not stigmatized” and get the help they need so any relapses are treated quickly, Fall said.