Many field hospitals went largely unused, will be shut down 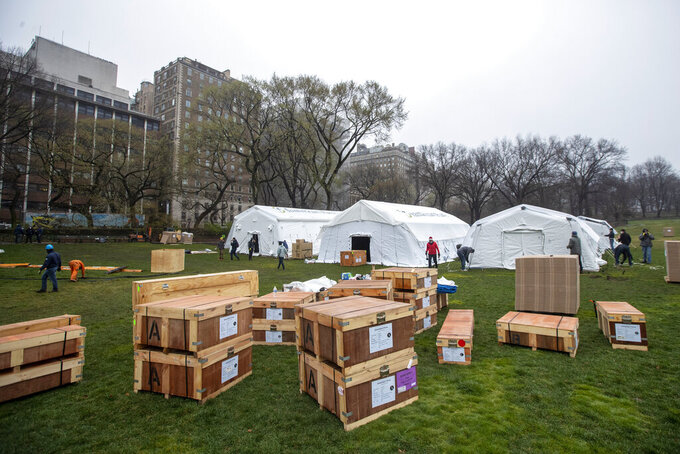 FILE - In this March 29, 2020, file photo, a Samaritan's Purse crew works on building an emergency field hospital equipped with a respiratory unit in New York's Central Park across from the Mount Sinai Hospital. Uncertainty in planning for the pandemic has left the globe dotted with dozens of barely used or unused temporary field hospitals. (AP Photo/Mary Altaffer)

When virus infections slowed down or fell short of worst-case predictions, the globe was left dotted with dozens of barely used or unused field hospitals. Some public officials say that’s a good problem to have — despite spending potentially billions of dollars to erect the care centers — because it’s a sign the deadly disease was not nearly as cataclysmic as it might have been.

Many of the facilities will now be kept on standby for a possible second wave of infections. Some could even be repurposed as testing sites or recovery centers.

“It will count as a huge success for the whole country if we never have to use them,” said Simon Stevens, the chief executive of the National Health Service in England, where sparsely used field hospitals have been criticized as costly, unnecessary “white elephants.”

“But with further waves of coronavirus possible, it is important that we have these extra facilities in place and treating patients,” Stevens said.

In Italy and Spain, field hospitals were seen as crucial to relieving strain on emergency rooms as the disease exploded in March. Those countries rank behind only the United States for the largest number of infections and deaths, according to a Johns Hopkins University tally.

Spain built at least 16 field hospitals, ranging from a few beds under tents to one with more than 5,000 beds at Madrid’s big convention center. That facility has treated more than 4,000 patients, accounting for 10% of the total infected population in the disease-ravaged capital.

As the crisis eases and permanent hospitals are able to better manage the load, some of Spain’s field hospitals are scaling back or shutting down. The Madrid facility halved its capacity and could close in two weeks if infection rates hold.

Spanish Health Minister Salvador Illa said the field hospitals have been important and in some cases "essential.”

For all the successes, there have also been missteps.

In Milan, in Italy’s hardest-hit region, a field hospital funded with 21 million euro ($23 million) in private donations came too late and was built too far from the city center to be much help.

The 200-bed hospital, put up in less than two weeks at a conference center on the outskirts of town, opened to great fanfare on March 31, but by then pressure on the region’s intensive care units was already starting to fall. It has treated only a few dozen patients.

Italy’s national civil protection agency opposed the plan from the start, arguing it could never equip the facility with ventilators or personnel in time. But the regional governor, a member of a rival political party, forged ahead.

“We had to ... prepare a dam in case the epidemic overcame the embankment,” Lombardy Governor Attilio Fontana told Italian all-news station Radio 24.

In Berlin, construction and hiring are continuing at a 1,000-bed field hospital dubbed the Corona Center. The project has advanced despite a glut of available hospital beds in the German capital, leading to questions about its usefulness and the 90 million euros ($97.8 million) it’s cost so far.

In New York, the hardest-hit state in the U.S. with nearly 300,000 cases and more than 18,000 deaths, Gov. Andrew Cuomo has used the mantra “plan for the worst, hope for the best” to defend his push for field hospitals that have, so far, gone largely unused.

Looking at projections in mid-March that the state would need to double hospital capacity to 110,000 beds by the end of April, Cuomo asked the U.S. Army Corps of Engineers to build at least four field hospitals and the Navy to deploy the Navy's Comfort hospital ship to Manhattan.

At the same time, hospitals were discharging patients to free up beds and adding new ones, and the public was starting to embrace social-distancing measures to stem the spread of infection.

With the number of disease-related hospitalizations cresting far below forecasts, at 18,825 on April 12, just one of the Army Corps-built temporary facilities opened, at the Jacob K. Javits Convention Center. It will close Friday after treating little more than 1,000 patients.

The Army Corps of Engineers paid construction firms $136 million to build the Stony Brook facility and $116.5 million to build the one on the Old Westbury campus, according to federal contracting data. It gave out at least $100 million in contracts for since-canceled hospitals at a horse racing track and a city park.

The disparity between Cuomo’s worst-case-scenario planning and what actually happened caught the attention of one critic, President Donald Trump.

“We built you thousands of hospital beds that you didn’t need or use,” he tweeted to his gubernatorial nemesis on April 17.

Similar scenarios have played out across the U.S.

Chicago pared back plans for a 3,000-bed temporary hospital at McCormick Place, the nation’s largest convention center, as infection numbers decreased. Opened April 3 instead with 500 beds, the $64 million facility treated just 12 people as of last week, with six of them being released.

A 1,000-bed facility at Detroit’s big convention center has treated about three-dozen people, with 16 receiving care there as of Tuesday. Mayor Mike Duggan called the facility’s limited usage a “sign of great success" and said it would soon shut down.

Philadelphia plans to shutter its 200-bed temporary hospital in about two weeks. Open since April 20, it’s never had more than six patients at a time. New Jersey’s four Army Corps-built field hospitals, with a total of 1,000 beds, have treated 346 patients as of Monday.

“Better to build it and they don’t come than to not build it at all,” Philadelphia Mayor Jim Kenney said.

Meanwhile, in New Orleans, the convention center that provided refuge to survivors of Hurricane Katrina 15 years ago, is seeing about 100 coronavirus patients at any given time as a field hospital.

Louisiana Gov. John Bel Edwards said he does not have any immediate plans to close the facility, because modeling shows the possibility of an uptick in virus cases in the future. He said the city has no need for the convention space.

“Quite frankly, we’re not going to have conventions coming to New Orleans in the immediate future,” Edwards said.