Marcelo takes a knee as Madrid wins at its training center 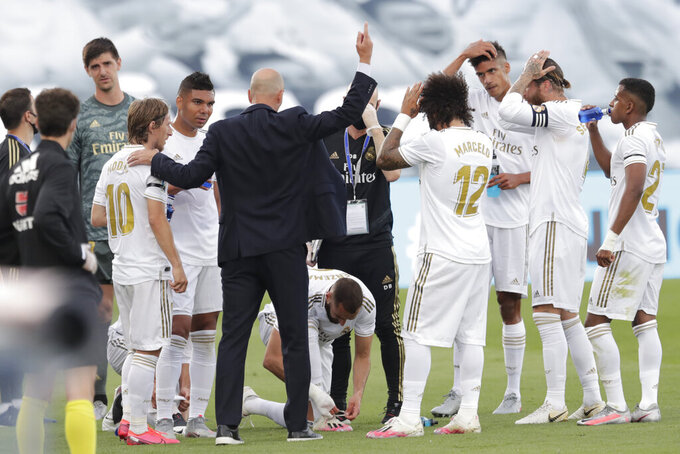 MADRID (AP) — Playing a home game but not at its famed Santiago Bernabéu Stadium, Real Madrid resumed its Spanish league campaign with a 3-1 win over Eibar on Sunday to keep pace with leader Barcelona. The game saw Marcelo take a knee during a goal celebration in apparent support for the Black Lives Matter movement.

The Brazilian veteran defender put his left knee down and raised his right fist into the air after scoring the third goal for Madrid. Marcelo's gesture made him one of the few players in the Spanish league to make public their support for the movement which has protested police brutality after George Floyd’s death in the United States. Valencia's players last week had also taken a knee before a training session to show their support.

Toni Kroos and Sergio Ramos also scored as Madrid won the game at the club's training center while major renovation work takes place at the 80,000-capacity Bernabéu, about 10 kilometers (6 miles) away.

Eden Hazard, who had been expected to miss the rest of the season because of a foot injury sustained before the coronavirus pandemic, thrived on his return and set up two of the goals in the game. There were no fans at the 6,000-capacity Alfredo Di Stéfano Stadium, which is used mostly by Madrid's “B” team.

“This is completely different to what we experienced before, you have to adapt,” said Madrid coach Zinedine Zidane, who completed 200 matches in charge. Zidane has the second-most league victories as Madrid coach with 90, behind the 257 of Miguel Muñoz.

Madrid players walked a few hundred meters (yards) from the team’s housing facilities to the stadium for the match that marked the club's return after a pause of more than three months because of the pandemic.

A large banner in the stands spanned from one goal line to the other with the image of a black ribbon and the message “in our hearts,” honoring the nearly 28,000 who have died with COVID-19 in Spain. The league officially resumed on Thursday with third-place Sevilla defeating city rival Real Betis 2-0.

The victory kept Madrid two points behind Barcelona, which returned on Saturday with a 4-0 rout at Mallorca. Eibar and Mallorca are both fighting relegation.

Madrid dominated from the start and Kroos opened the scoring with a shot into the top corner in the fourth minute. Ramos added to the lead from close range in the 30th after a pass by Hazard, who started the buildup for Marcelo's strike from inside the area in the 37th.

Eibar, sitting two points outside the relegation zone, got its only goal from Pedro Bigas in the 60th.

Ramos had scored the first goal at the Alfredo Di Stéfano when it was inaugurated with an exhibition match in 2006.

“The truth is we are all thrilled to be back on the field again,” Ramos said. “We couldn't wait for the league to start again, to compete again, and the best way to do that is with a win.”

Madrid is expected to play all of its remaining home matches at the Alfredo Di Stéfano because the Bernabéu will continue to undergo renovation work during the summer. The club is likely to remain at the stadium for the rest of the season even if fans are allowed back before then, which the league has said is a possibility.

Atlético Madrid’s struggles continued as its season resumed after being held 1-1 at Athletic Bilbao for its third straight league draw.

The goals at the empty San Mamés Stadium came a couple of minutes apart late in the first half, with Athletic's Iker Muniain scoring in the 37th and Atlético equalizing with Diego Costa in the 39th for his first goal since last October.

During the celebration, Costa held the jersey of Atlético women’s team player Virginia Torrecilla, who is recovering from brain surgery to remove a tumor.

It was the 13th league draw for Atlético, which has only two wins in its last nine league matches.

“We earned a draw at a tough place but we need to start winning three points if we want to stay in contention to qualify for the Champions League," Atlético midfielder Jorge “Koke” Resurrección said. "It will be difficult if we don't start winning matches.”

Atlético’s last match before the break had been an away victory against Liverpool that eliminated the titleholders in the Champions League round of 16. But Atlético had drawn its last two league matches — against Sevilla and Espanyol — to drop in the standings and remain far from the leaders. It trails Barcelona by 15 points with 10 rounds left.

Atlético has the same 46 points as fifth-place Getafe and is a point behind fourth-place Real Sociedad, which drew 1-1 with Osasuna at home on Sunday.

Athletic, which had won two in a row before the break, stayed in 10th place.