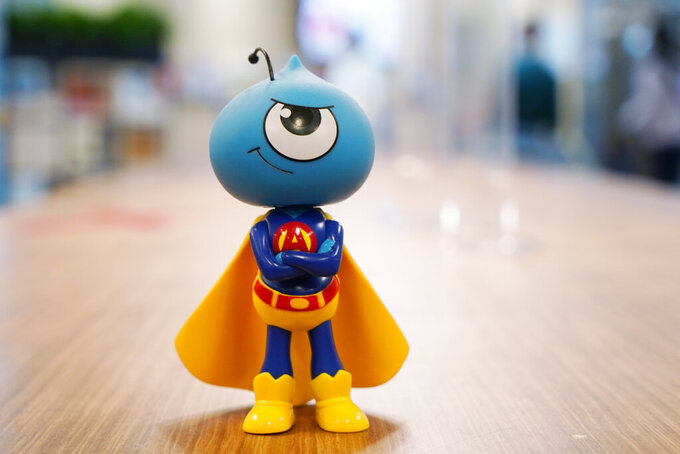 In this Friday, Oct. 23, 2020 photo, the figure of Ant Group's mascot is displayed at the Ant Group office in Hong Kong. China's Ant Group will try to raise nearly $35 billion in its initial public offering in Shanghai and Hong Kong, which would make it the largest share offering in history. Alibaba-affiliated Ant Group, which operates a suite of financial products including the widely-used Alipay digital wallet in China and one of the world's largest money market funds, will hold dual listings in Shanghai and Hong Kong. (AP Photo/Kin Cheung)

The Shanghai stock exchange cited regulatory changes in Ant's industry and a possible failure to meet disclosure requirements but gave no details. Ant said later it would suspend its Hong Kong debut due to the Shanghai suspension. Shares were to have started trading on both exchanges Thursday.

“Views regarding the health and stability of the financial sector were exchanged,” Ant Group said in a prepared statement. The company said it was “committed to implementing the meeting opinions” but gave no details.

“We will continue to improve our capabilities to provide inclusive services and promote economic development to improve the lives of ordinary citizens,” the company said.

Ant apologized to investors and said it would wait for notice from regulators about further developments. U.S.-traded shares of Alibaba closed Tuesday down more than 8%, matching the company’s largest percentage decline since its first day of trading on the New York Stock Exchange.

In a joint statement, the Chinese central bank, securities regulator and other agencies said Monday they had “regulatory interviews” with Ma, Ant Group chairman Eric Jing and president Hu Xiaoming.

It was hoped that Ant's debut would put a spotlight on the economic rebound of China, the first major economy to return to growth after the coronavirus pandemic began last December.

The decision to go public on exchanges in both Shanghai and Hong Kong reflected the evolving nature of China’s fast-growing financial markets and their relationship to fledgling private sector corporate giants such as Ant and Alibaba.

Mainland markets are off-limits to most foreign investors and until recently were used mostly to raise money for state-owned industry. Private sector companies and those that wanted access to foreign investors sold shares in Hong Kong, New York or other offshore centers. Alibaba went public in New York rather than on a mainland exchange.

More recently, the ruling Communist Party has been encouraging use of mainland markets to raise money for private sector companies that generate most of China’s jobs and wealth and to give Chinese investors a chance to profit from their growth.

Ant’s earlier announcement of its plan cited “innovative measures” in Shanghai and Hong Kong, which created separate trading boards for tech stocks. It said “leading edge technology companies” would have “greater access to the capital markets.”

Ma founded Alibaba in 1999 to help link Chinese wholesalers with foreign retailers. Alipay was created to facilitate payments in an economy where few people had credit cards.

Alipay was transferred in 2011 from Alibaba Group to a company controlled by Ma. That prompted complaints Ma failed to inform shareholders including Yahoo Inc. and Japan’s Softbank.

Alibaba said the move was required to comply with Chinese regulations, but some financial analysts said the company was paid too little. The dispute was later resolved by Alibaba, Yahoo and Softbank.

Ant Group's shares were due to begin trade in Hong Kong and Shanghai on Thursday after it raised at least $34.5 billion. Retail investors in Shanghai placed bids for nearly $3 trillion worth of shares.

The company has come under increased scrutiny and tighter regulation as it expanded the range of financial technology services it offers. Among the new regulations are caps on the use of asset-backed securities to fund consumer loans, new capital and licensing requirements and caps on lending rates.

On Monday, the central bank raised the minimum required capital for lenders such as Ant to a 5 billion yuan ($750 million).