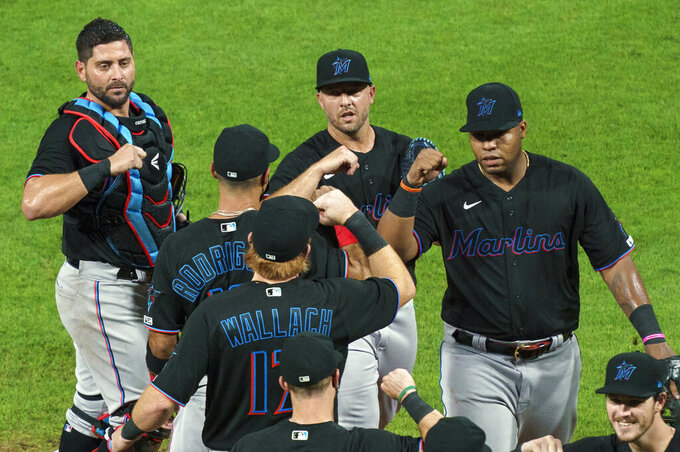 FILE - In this Friday, July 24, 2020, file photo, Miami Marlins' Jesus Aguilar, right, celebrates a win with teammates following a baseball game against the Philadelphia Phillies in Philadelphia. Marlins CEO Derek Jeter blames the team’s coronavirus outbreak on a collective false sense of security that made players lax about social distancing and wearing masks. Infected were 21 members of the team’s traveling party, including at least 18 players. (AP Photo/Chris Szagola, File)

Jeter blames the team's COVID-19 outbreak on a collective false sense of security that made the Marlins lax about social distancing and wearing masks.

"The entire traveling party got a little too comfortable,” Jeter said Monday.

Infected were 21 members of the traveling party, including at least 18 players. None is seriously ill, Jeter said, and he expects all to return this season.

With more than half of the team sidelined, Jeter said the Marlins still can be competitive when their season resumes Tuesday at Baltimore after a hiatus of more than a week.

Following an MLB investigation, Jeter said, it's impossible to know where the first Marlins player became infected or how the coronavirus reached the clubhouse. The team didn't have a single case of COVID-19 during three weeks of summer camp and left South Florida to play two exhibition games in Atlanta.

Miami then opened the season with a three-game series in Philadelphia, where the outbreak surfaced.

“Guys were around each other, they got relaxed and they let their guard down,” Jeter said. "They were getting together in groups. They weren’t wearing masks as much as they should have; they weren’t social distancing."

Jeter said his players were upset by speculation that reckless misbehavior was to blame.

“Our guys were not running all around town in Atlanta,” he said. “We did have a couple of individuals leave the hotel. We had guys leave to get coffee, to get clothes. A guy left to have dinner at a teammate’s house. There were no other guests on site. There was no salacious activity. There was no hanging out at bars, no clubs, no running around Atlanta.”

By July 26, the outbreak became so serious that the Marlins' season was temporarily suspended, with the team stranded in Philadelphia. The infected players have since returned by bus to South Florida, where they are quarantined.

The Phillies also were sidelined for a week, but manager Joe Girardi declined to blame the Marlins.

“I don’t think it’s something they tried to go do," Girardi said. "I think there’s a sense of guilt sometimes when a player gets it, and that’s a tough way to live because there are so many ways to contract this, and a lot of times you don’t know if someone around you has COVID. So I feel for what they’ve kind of been through.”

The St. Louis Cardinals are now dealing with an outbreak, too. Seven of their players and six staff members have tested positive for COVID-19, causing MLB to postpone a four-game series at Detroit.

“We’ve been given an opportunity to hit the reset button,” Jeter said. “I hope people look at what happened to us and use that as a warning to see how quickly this is able to spread if you’re not following the protocols 100%.”

The sidelined Marlins will be replaced by prospects, along with veterans the organization scrambled to acquire in the past week. Manager Don Mattingly said he has never spoken with some of the players joining the team.

Additions will include outfielder Monte Harrison, a highly regarded prospect, and outfielders Matt Joyce and Lewis Brinson, both returning from bouts with the virus.

Right-hander Pablo Lopez will start Tuesday against Baltimore. The pitching staff was especially hard hit by the outbreak and will rely heavily on newcomers.

Along with the heavy roster turnover, holdover players must deal with rustiness after being isolated in hotel rooms for a week. They attempted to stay in shape by doing Zumba, stretching, pushups and other arm exercises, Mattingly said.

“They were trying to figure out some type of workout in the room to keep moving, anything they could do,” Mattingly said.

Despite the unprecedented disruption, Mattingly said he's optimistic the team can still make a good showing after starting the season with high hopes of making the playoffs for the first time since 2003.

“Through all this, we'd like our story to be that we persevered through this, learned from it and moved forward,” Mattingly said.