Márquez won't race with broken arm after return to circuit 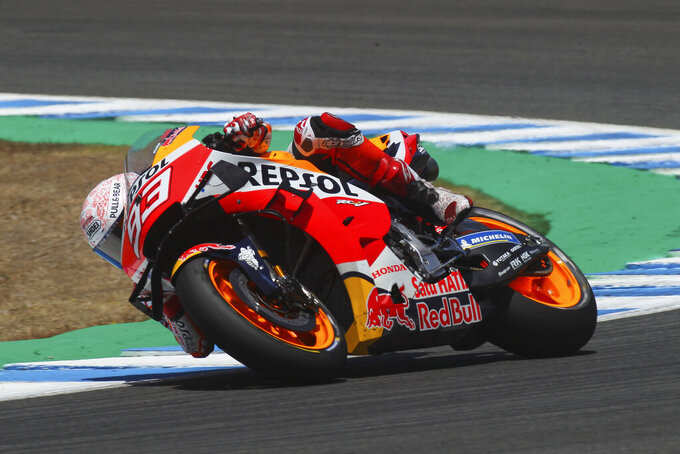 Honda boss Albert Puig said that “we can’t take any more risks” with the health of the six-time world champion.

“We took the correct decision,” Puig said at the Circuito de Jerez-Ángel Nieto track. “If a champion thinks he has the chance to race, he can’t stay at home. He has to try, and that is what he did. Now his arm hurts and is inflamed. There are many races to go and life takes many twists.”

Márquez abandoned the qualifying session, meaning if he had opted to compete he would have started Sunday’s race from last place. The Spaniard finished Saturday’s practice session with the 20th best time.

Fabio Quartararo took his second straight pole position, a week after the Frenchman won the Spanish Grand Prix held on the same track. Quartararo will be looking to increase his early lead in the standings on Sunday when he starts in front of Maverick Viñales.

Márquez injured his arm last Sunday when he crashed near the end of the Spanish GP, the first race since the coronavirus pandemic. He passed a physical on Tuesday and was declared fit to race despite undergoing surgery to fix a broken right humerus.

Tests showed there was no nerve damage caused by the fracture, allowing Márquez to give it a go this weekend.