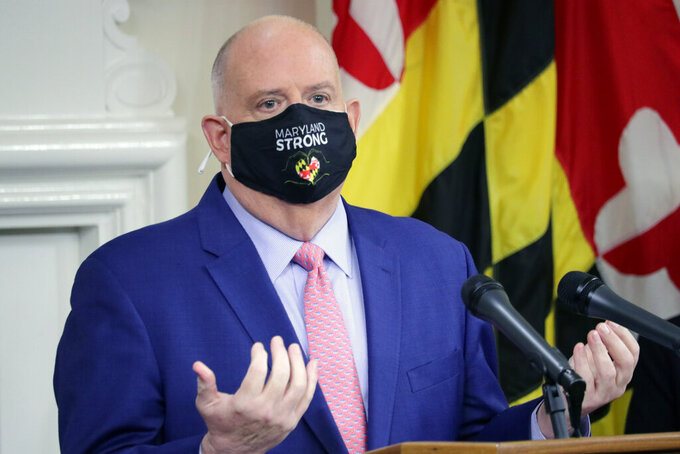 Maryland Gov. Larry Hogan takes questions from journalists during a news conference on Thursday, Nov. 12, 2020 in Annapolis, Md., where the governor announced how about $70 million in federal money will be used to help fight the virus. (AP Photo/Brian Witte)

ANNAPOLIS, Md. (AP) — Maryland Gov. Larry Hogan announced Thursday how the state will allocate about $70 million in federal aid as the state braces for months of rising coronavirus cases, including $20 million for personal protective equipment.

Maryland already is exceeding the state's goal of a 90-day supply of PPE for the most critical resources, Hogan said, and he encouraged local governments to use the remaining federal funds to increase their stockpiles of equipment, especially gloves, gowns and masks.

“Unfortunately, we have more tough times ahead of us and it’s likely going to get worse before it gets better, but we truly are all in this together, and if we all do our part to rise to this challenge and to meet this moment we will get through this together,” the Republican governor said at a news conference.

The counties also are limiting indoor dining from 50% to 25%. That order takes effect Sunday in Prince George’s and Nov. 20 in Anne Arundel.

Maryland has had at least 1,000 new cases of the virus for nine straight days. Hospitalizations related to the virus increased by 58 Thursday morning to a current total of 863. Earlier this week, Hogan announced a statewide reduction for indoor operations for bars and restaurants from 75% to 50%. The change went into effect Wednesday. Local officials can enact tighter restrictions.

The state also is allocating $2 million to increase call capacity at the Maryland Department of Human Services and extend its hours, another $2 million for foster care assistance and $1 million for a wastewater sampling program to detect COVID-19 outbreaks in vulnerable populations like public housing or correctional facilities.

Prince George's County, in the suburbs of Washington, has the highest number of confirmed cases in the state, with 35,336. So far, Maryland has reported a total of 159,900 cases statewide.

Some of Maryland's larger jurisdictions already have announced tighter restrictions in recent days.

On Tuesday, Montgomery County, the state's most populous jurisdiction also in the suburbs of the nation's capital, announced it was limiting gatherings to 25 people and curtailing capacity for restaurants and shops from 50% to 25%.

Late last week, Baltimore announced it was requiring masks, both indoors and outdoors in public. Maryland's largest city also is closing indoor dining each night at 11 p.m., and bars that do not serve food are closed.