Massachusetts residents age 65 and up can get vaccine shots 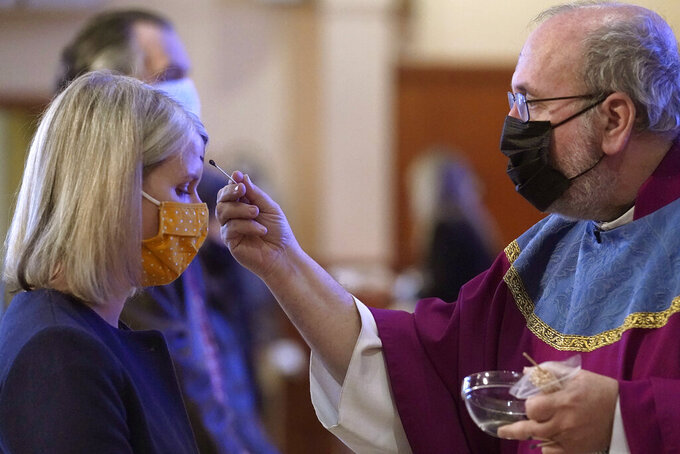 Catholic Priest Paul Soper, right, uses a swab out of concern for the coronavirus, to apply ash to the forehead of a parishioner during Ash Wednesday Mass at Saint Margaret Mary Parish, in Westwood, Mass., Wednesday, Feb. 17, 2021. (AP Photo/Steven Senne)

With high demand for appointments and limited vaccine supply, it could take more than a month for all eligible individuals to get an appointment, health officials said. Massachusetts has been receiving approximately 110,000 first doses per week from the federal government.

The state has created a COVID-19 vaccine finder website to help residents locate and book appointments.

Gov. Charlie Baker said the state is relying on individuals to be upfront about their health conditions.

“It is based on an honor system," the Republican said at a Statehouse press conference. “The overwhelming majority of people try to be honest about this.”

Baker also said the decision to add asthma to the list of medical conditions was meant to address what he described as long-standing environmental and economic justice issues with communities of color disproportionately effected by asthma.

“It's a legitimate issue and we view it as much as an equity issue as a medical issue.” Baker said.

Individuals who can't to book an appointment by using the internet can call 211 and follow the prompts for vaccine appointments. There are currently more than 170 vaccination locations across the Commonwealth.

The number of newly confirmed coronavirus deaths in Massachusetts rose by 55 on Wednesday, pushing the state’s confirmed COVID-19 death toll to 15,312 since the start of the pandemic.

There were nearly 1,100 people reported hospitalized Wednesday because of confirmed cases of COVID-19, with more than 270 in intensive care units.

The average age of those hospitalized was 70. There were an estimated nearly 40,000 people with current active cases of COVID-19 in the state.

The number of probable or confirmed COVID-19 deaths reported in long-term care facilities rose to 8,420.

More than 1.2 million doses of the COVID-19 vaccine have been administered in Massachusetts, including more than 893,000 first doses and more than 316,000 second doses.

State lawmakers are planning to hold the first in what they say will be a series of oversight hearings next week on the state’s vaccination plan.

Democratic Senate President Karen Spilka said lawmakers “have heard the frustration and anger of people across Massachusetts about the constantly changing and confusing vaccination roll out plan.”

“It is essential that we get a greater understanding of the Baker administration’s plans to improve our vaccination rates, especially for those communities and populations hardest hit,” Spilka said in a press release Wednesday.

Democratic House Speaker Ron Mariano said in the same release that the rollout “has been marked by both logistical and communications shortcomings.”

The Feb. 25 hearing will seek testimony from the Baker administration.

Baker said Wednesday his administration has shared information about the distribution plan with lawmakers.

“We look forward to talking to them” Baker said.

Civil rights and immigrant activists launched a new coalition Wednesday to call attention to the racial inequities in the coronavirus vaccine rollout in Massachusetts.

Baker’s office didn’t respond to an email seeking comment, but the coalition’s launch comes a day after his office announced an outreach effort in 20 hard-hit communities focused on increasing awareness of the vaccine’s safety and efficacy and reducing other barriers to vaccination.

Carlene Pavlos, co-chair of the new coalition and executive director of the Massachusetts Public Health Association, said Baker’s latest effort is a step in the right direction, but not nearly comprehensive enough.

Other members of the coalition include the Massachusetts Immigrant and Refugee Advocacy Coalition, the Immigrants Assistance Center, Lawyers for Civil Rights, the ACLU, and the NAACP.

Workers at the mass vaccination site at Gillette Stadium have now given out 65,878 coronavirus shots, enough to fill every seat at the home of the New England Patriots.

Brigitte Peters, 79, of Uxbridge, received two tickets to the team's 2021 home opener for getting the landmark shot on Tuesday evening. It will be her first Patriots game.

She said she was excited to tell her grandchildren about the tickets, and the vaccination process was easy and painless.

“It couldn’t have been better, I didn’t even feel it,” she said.

The site operated by CIC Health opened Jan. 18. It is now giving about 4,000 shots per day, and plans to continue expanding.