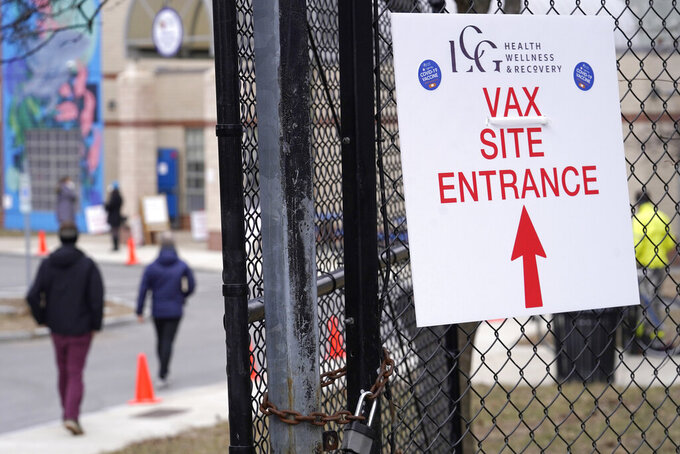 BOSTON (AP) — The number of COVID-19 infections in Massachusetts schools is growing but a school official insists that schools are “very safe.”

A report shows 801 new coronavirus cases among students and 244 among school staffers for the week that ended Wednesday. Combined, that's the largest number this academic year, and it comes just days before elementary schools return to full-time, in-person learning on Monday.

But the rising rates among student and staff don’t mean schools are where the disease is being transmitted: Cases are also surging in the general population.

“The school numbers going up does not mean that schools are not safe. In fact, schools are very safe,” he said.

In other coronavirus-related news in the region:

University of Connecticut officials have placed five dormitories under quarantine because of a spike in coronavirus cases that may be related to large, off-campus parties.

Quarantines were imposed at 4 p.m. Friday on the Eddy, Middlesex, Windham, Rogers and Russell dormitories on the main campus in Storrs. Students in those dorms are barred from attending in-person instruction or events through next week.

Last weekend, state police said a party attended by more than 100 people at a house near campus resulted in two arrests and one infraction citation. Earlier in March, 150 to 200 people gathered for a party about a mile from campus, resulting in three people being issued infractions.

Since the semester began, 324 students who live on campus have tested positive for the virus. The current positive testing rate is 1.5%.

As more older Mainers are vaccinated, a surge of infections is being driven by people younger than 30.

Case numbers are rising in Maine — and the average age of infected individuals skewing younger — despite a vaccination campaign that has reached roughly one-third of the state’s residents, the Portland Press Herald reported.

The age distribution of cases has changed dramatically in one year. On March 31, 2020, people younger than 30 accounted for only 11.7% of all Maine cases. A year later, they account for 18.2% of all cases.

Dr. Nirav Shah, director of the Maine Center for Disease Control and Prevention, said expanded vaccinations will help. The state is making COVID-19 vaccine available to everyone 16 and older on Wednesday.

“We talk a lot about the light at the end of the tunnel. Vaccines are our vehicle out of that tunnel,” he tweeted.

The University of New Hampshire will host two COVID-19 vaccination clinics next week for in-state students, staff and faculty next week.

The clinics will be open Thursday and Friday at the Whittemore Center in Durham. Participants will receive the first dose of the vaccine, the Portsmouth Herald reported. Those who have already received their first shots, as well as students, staff and faculty who live out of state, are excluded.

“We continue to advocate for all UNH community members, but at this time we can only vaccinate New Hampshire residents,” said UNH Chief of Police Paul Dean and the school’s health and wellness director, Peter Degnan.

Those affiliated with the school’s Manchester campus and the Franklin Pierce School of Law in Concord also are eligible for the vaccines in Durham.

Rhode Island's football game against New Hampshire was postponed because of COVID-19.

The game, which was being hosted by Rhode Island, was supposed to be played Saturday in Kingston but there was a COVID-19 outbreak that affected the New Hampshire program, officials said.

A decision on rescheduling the game will be made at a later date. Rhode Island is due to play Maine on April 10.

Vermont is setting up special clinics in remote Essex County to get more people vaccinated against COVID-19 in a place that has the lowest vaccination rate in the state.

Human Services Secretary Mike Smith says the state needs to get people vaccinated from Essex County, located along the northeast corner of the state, abutting the Canadian border and the Connecticut River border with New Hampshire.

The state will be sending mobile clinics to nine separate locations in the county on April 10 and 11. By Saturday people will be able to make appointments online especially for Essex County.

In addition, the state is in discussions with a New Hampshire health care provider located just over the state line to administer vaccines to Vermonters.