Masters is a win for Hideki Matsuyama, and for Japan 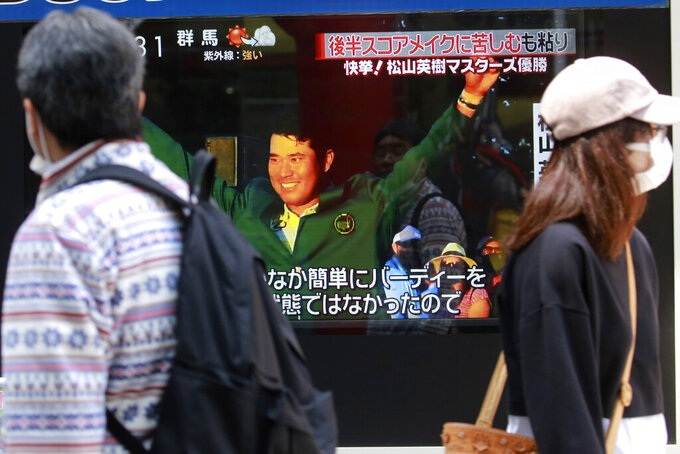 People walk past Japanese golfer Hideki Matsuyama seen in a TV news channel reporting his win in the Masters golf tournament, in Tokyo, Monday, April 12, 2021. From Japan's prime minister on down, the country celebrated Matsuyama's victory in the Masters — the first Japanese to win at Augusta National and wear the famous green jacket.(AP Photo/Koji Sasahara)

AUGUSTA, Ga. (AP) — The question became inevitable at some of the bigger golf tournaments, whether it was for Jordan Spieth or Tiger Woods. And it had nothing to do with them.

Japanese reporters, having quietly rehearsed the words in English, wanted to know what the best players thought of Hideki Matsuyama.

This wasn’t about validation. Everyone knew he could play.

Matsuyama was still in college when he won his first professional event. He made the cut at the Masters as a 19-year-old amateur. He won the Japan Golf Tour money title as a rookie. When he played in the Presidents Cup at age 21, he had more wins that year than anyone on his team.

This was about acceptance.

The ultimate validation came on a Sunday at the Masters that neither Matsuyama nor his golf-crazed nation will ever forget.

Matsuyama had a four-shot lead that was whittled to one when he walked off the first green. His six-shot lead in the middle of Amen Corner was down to two shots when he stepped onto the 16th tee. But he held steady to the end, leading to a monumental occasion in fabled Butler Cabin.

That’s when Fred Ridley, the Masters chairman, turned to defending champion Dustin Johnson and said, “We’d be honored if you’d place the green jacket on our newest champion, Hideki Matsuyama.”

“I’m really happy,” Matsuyama said, significant because they were the only words he spoke without his interpreter.

All of Japan had reason to celebrate.

The week at Augusta National began with 17-year-old Tsubasa Kajitani winning the Augusta National Women’s Amateur. Nine days later, Japan had its first male winner of a major championship, which feels certain to have a lasting effect.

Adam Scott can attest to that.

One of his endorsement contracts take him to the Japan Open, and he has seen the popularity of the game and the passion for its stars. He played alongside Matsuyama and Ryo Ishikawa, the first Japanese star of this generation. Scott had not felt that ignored since he played with Woods and Phil Mickelson in the U.S. Open at Torrey Pines.

“He’s a bit like a Tiger Woods to the rest of the world,” he said of Matsuyama, who went on to win that week.

“I can’t imagine what it’s going to be like,” Matsuyama said, this time through his interpreter. “But what a thrill and honor it will be for me to take the green jacket back to Japan. And I’m really looking forward to it.”

Now try to picture the reception at Kasamigaseki Country Club, the site of the Olympics in about three months. They have been delayed a year because of the COVID-19 pandemic, and assuming the games go on, the timing couldn’t be better for golf.

A private club that only recently allowed female members — that should sound familiar — Kasamigaseki is where Matsuyama walloped the field by five shots to win the Asia-Pacific Amateur in 2011. The tournament was the brainchild of Billy Payne, the former Augusta National chairman who wanted the green jacket to inspire greater growth in Asia.

His next trip to Butler Cabin was Sunday after his one-shot victory in the Masters. He no longer was a teenager with potential. A nation was watching.

“It’s thrilling to think that there are a lot of youngsters in Japan watching today,” he said. “Hopefully in five, 10 years, when they get a little older, hopefully some of them will be competing on the world stage.”

Jumbo Ozaki remains an iconic figure in Japanese golf, a winner of more than 100 tournaments, though he rarely left home. He was inducted into the World Golf Hall of Fame in 2011, the year Matsuyama first played in the Masters.

Isao Aoki was the closest Japan had come to winning a major. He was tied with Jack Nicklaus going into the final round of the U.S. Open at Baltusrol in 1980, and wound up two shots behind golf’s greatest champion.

“I’ve been blessed to spend a lot of time in Japan,” Nicklaus posted on Twitter. “I know they love the game of golf. They’re also very proud people and they’re even prouder today! I competed against the great Isao Aoki, and know how revered he was and is. Hideki will also now forever be a hero to his country.”

Nicklaus already had a soft spot for Matsuyama. His first PGA Tour victory was in 2014 at the Memorial, the tournament Nicklaus runs at Muirfield Village in Ohio.

“I just think you’ve just seen the start of what’s going to be truly one of your world’s great players over the next 10 to 15 years,” Nicklaus said that day.

He already had more PGA Tour victories than any Japanese player and now is up to six, to go along with nine other wins worldwide. He wasn’t interested in declaring he was the best ever from Japan. He is young and has too much respect for those who came before him.