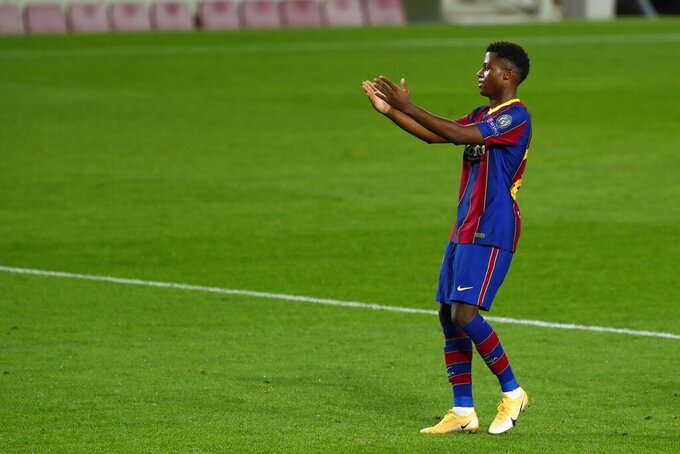 Barcelona and Real Madrid meet in the season’s first clásico after both lost in the league last weekend. At least Barcelona recovered to win in the Champions League in midweek but Madrid was beaten again. Sergio Ramos is fit to play after he missed Madrid’s loss to Shakhtar Donetsk due to a knee injury that kept him out of the defeat to Cádiz last weekend. Lionel Messi will be looking to avoid going a sixth match against Madrid without scoring, having last netted in May 2018 — a record 26th goal for any player in clásicos. This clásico, which will be played in an empty Camp Nou due to the pandemic restrictions, will be the first Ronald Koeman coaches for Barcelona after playing in the fixture as a defender for the Catalan club in the early 1990s. Elsewhere, Atlético Madrid hosts Real Betis needing to rebound from its defeat to Bayern Munich in the Champions League, while Sevilla welcomes Eibar.

Thiago Silva and Christian Pulisic have shaken off knocks to be fit for Chelsea’s trip to Manchester United with Frank Lampard’s side looking to improve on last weekend’s 3-3 draw with Southampton. Harry Maguire, Mason Greenwood and new boy Edinson Cavani could be involved for United as Anthony Martial continues to serve his domestic suspension. Liverpool goalkeeper Alisson Becker is one of four players Jurgen Klopp will make a late check on ahead of the visit of Sheffield United. The Brazil international has missed three matches with a shoulder injury but has returned to light training. Klopp is also waiting fitness updates on midfielders Thiago Alcantara and Naby Keita, and center back Joel Matip. Record signing Rhian Brewster could make his full debut for Sheffield United against his former club. Manchester City is at West Ham and could be without Kevin De Bruyne, Aymeric Laporte and Nathan Ake through injuries. Fulham plays Crystal Palace in a London derby fresh from collecting its first point of the season. Palace will be without Jack Butland and Jordan Ayew, who are self-isolating after testing positive for the coronavirus.

Inter Milan will be looking for a good result against Genoa to bounce back from a difficult week. The Nerazzurri lost the derby to fierce rival AC Milan on Saturday and then needed a last-minute equalizer to scrape a 2-2 draw against Borussia Mönchengladbach in their Champions League opener midweek. Inter visits Genoa this weekend with both teams having been hit hard by coronavirus outbreaks in their squads. Fellow title hopefuls Atalanta and Lazio are also playing, against Sampdoria and Bologna respectively.

Schalke wants to end its club-record 20-game run without a win, and the prospect of adding to the pressure on bitter rival Borussia Dortmund gives it all the motivation it needs ahead of Germany’s biggest derby. Schalke’s new coach, Manuel Baum, is still waiting for his first win after two games in charge, but his team showed morale at least in coming back to draw with Union Berlin 1-1 for its first point of the season last weekend. Dortmund seems to be always just one game away from crisis and the 3-1 defeat at Lazio in their Champions League opener has darkened the mood ahead of another potential setback. Only 300 fans will be allowed in Germany’s biggest stadium due to increasing coronavirus infection rates. Dortmund defender Emre Can is ruled out with the virus. Bayern Munich hosts Eintracht Frankfurt earlier Saturday, while Hertha Berlin visits Leipzig, Borussia Mönchengladbach travels to Mainz, and Union Berlin hosts Freiburg.

Marseille and Paris Saint-Germain will look for confidence-boosting wins after poor performances in the Champions League. Sixth-placed Marseille, which lost at Olympiakos 1-0, is at Lorient. Defending champion PSG has won its past five league games and hosts last-placed Dijon. But even a large goal haul at Parc des Princes will do little to quieten the critics following Tuesday’s 2-1 home defeat by Manchester United. Neymar was particularly poor in that game and his partnership with striker Kylian Mbappe was far from threatening. Meanwhile, Marseille striker Dario Benedetto hopes to end his goal drought against 17th-placed Lorient. After netting 11 league goals last season, he has not scored in seven games so far.