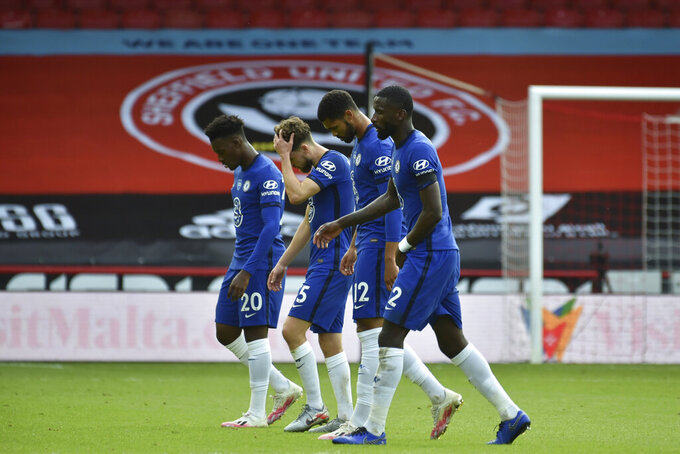 Chelsea can consolidate third place in the Premier League with a victory over already-relegated Norwich. With tough fixtures to come against Liverpool and Wolverhampton, Chelsea might need the victory if it wants to secure a top-four finish and qualify for next season's Champions League. Chelsea is a point ahead of both fourth-placed Leicester and Manchester United, which conceded a stoppage-time goal to draw against Southampton on Monday and stay fifth on goal difference. Manchester City's success in overturning a two-year ban from European competition means teams have to finish in the top four, rather than the top five, to get into the Champions League.

Porto can clinch the Portuguese league title if Benfica fails to beat seventh-place Vitória Guimarães at home. Porto, which hosts third-placed Sporting Lisbon on Wednesday, has an eight-point lead over Benfica with three rounds to go. Porto last won the league in 2018. Benfica is the defending Portuguese champion.

Atalanta will be looking to move into second spot in Serie A when it hosts relegation-threatened Brescia in a particularly poignant derby match. The teams are fierce rivals but have been united by tragedy. It was in northern Lombardy’s provinces of Bergamo and Brescia where the coronavirus outbreak erupted in late February. The provinces account for around a quarter of Italy’s 35,000 official COVID-19 deaths. Atalanta is fourth, a point behind Inter Milan and Lazio. Brescia is second to last and nine points from safety.