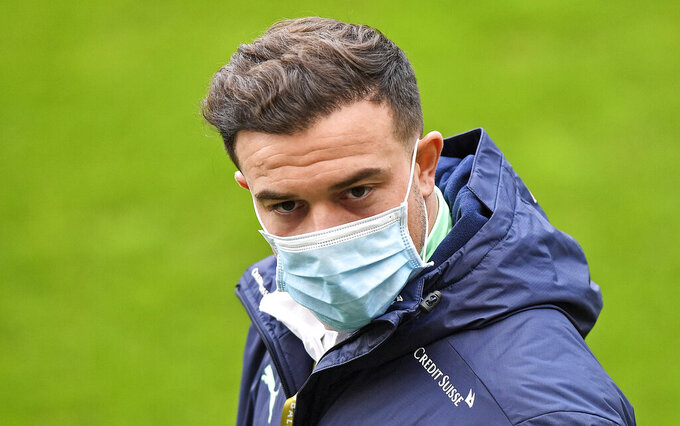 A look at what’s happening in the Nations League on Tuesday:

After finally winning a Nations League game at the seventh attempt on Saturday, Germany bids to follow up with another victory on Tuesday to keep the pressure on Group 4 leader Spain. Joachim Löw’s team hosts Switzerland – bottom of the group with one point from three games – in Cologne, where no fans will be allowed due to rising coronavirus cases in the city. Despite beating Ukraine 2-1 in Kyiv to end a run of three games without a win, Germany remained prone to mistakes and far off its best, and Löw said he would keep faith in the same players if he could to give them more playing time together. But there are doubts over the fitness of Paris Saint-Germain midfielder Julian Draxler and Leipzig pair Marcel Halstenberg and Lukas Klostermann. Löw will once again be able to build the side around the experienced Bayern Munich “block” of Manuel Neuer, Leon Goretzka, Joshua Kimmich and Serge Gnabry, with Real Madrid’s Toni Kroos partnering Kimmich in midfield. Kroos is in line to make his 100th appearance for Germany, while Kimmich is set for his 50th. “The two of them formed a very good understanding from the start,” Löw said.

Spain will try to strengthen its hold on first place in Group 4 when it visits Ukraine, a team it beat 4-0 in Madrid in September. Spain has a two-point lead over Germany after three matches. The Spaniards will be looking to win their third straight game in the competition after triumphs over the Ukrainians and Switzerland. It opened with a draw against Germany. About 15,000 fans are expected for the match in Kyiv. Ukraine's squad remains depleted because of COVID-19 cases among some of its players. Ukraine is four points behind Spain.