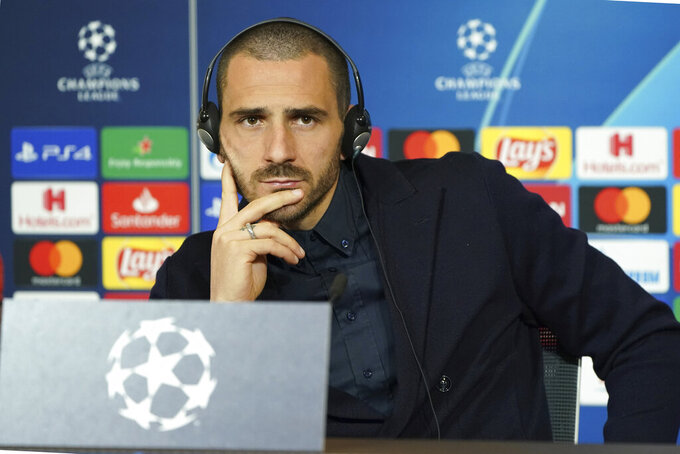 Juventus' Leonardo Bonucci answers to journalists during a press conference in Decines, near Lyon, central France, Tuesday, Feb. 25, 2020. Juventus will play against Lyon in a Champions League, round of 16th, first leg match on Wednesday,. (AP Photo/Laurent Cipriani)

LISBON, Portugal (AP) — A look at Saturday's Champions League game between Manchester City and Lyon which determines the opponent for Bayern Munich in the semifinals:

The one major trophy Manchester City has not won since its influx of investment from Abu Dhabi in 2008 is the European Cup. And Pep Guardiola's side will have to try to reach the semifinals for only the second time with Sergio Aguero still sidelined, recovering from knee surgery. While City ousted record 13-time champion Real Madrid in the pandemic-delayed quarterfinal, Lyon qualified for the unique last eight mini-tournament by beating Italian champion Juventus. Lyon has forward Memphis Depay fit again after a cruciate ligament injury. In the group stage last season, Lyon was unbeaten against City —- winning away at the English Premier League club and drawing at home.