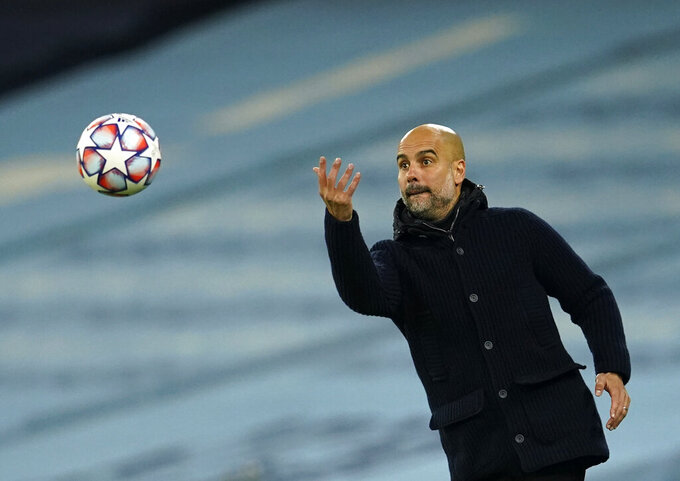 Jose Mourinho marks a year in charge of Tottenham with a home match against Manchester City and the teams experiencing contrasting seasons. Tottenham is second in the Premier League, while City is 10th after seven games. Sergio Aguero and Raheem Sterling are hoping to prove their fitness for City's trip to north London. Aguero, City's record scorer, has been out for the past month with a hamstring injury and Sterling pulled out of the England squad this week with a calf issue. Midfielder Fernandinho, who was recently sidelined by a muscular problem, is out with a bout of gastroenteritis. City manager Pep Guardiola is fresh from signing a new contract through 2023. Chelsea will be without Christian Pulisic and Thiago Silva for its trip to Newcastle. Pulisic is still recovering from a hamstring injury and Silva will be rested after international duty with Brazil. But Kai Havertz is back in contention after self-isolating and Ben Chilwell is also expected to be fit for Frank Lampard's side. Manchester United also hosts a West Bromwich side still searching for its first win of the season, while Aston Villa takes on Brighton.

Barcelona hopes to end Atlético Madrid’s unbeaten record in the Spanish league when it visits Wanda Metropolitano Stadium. With João Félix enjoying a breakout start to the campaign, coach Diego Simeone has his Atlético ahead of Barcelona and defending champion Real Madrid in the standings. Félix has seven goals in all competitions for his club, including back-to-back braces in its last two league games. Barcelona has gone winless in its last two outings in the league. Ronald Koeman's team starts the 10th round in eighth place, nine points off the lead of Real Sociedad. A Real Madrid side missing several players to injury or coronavirus infections faces a tough visit to second-placed Villarreal. Karim Benzema, Sergio Ramos and Federico Valverde are injured; Casemiro, Éder Militão and Luka Jovic have tested positive for the virus. Madrid lost its last match before the international break at Valencia 4-1.

The virus outbreak in the Uruguay team could help out Juventus when it hosts Cagliari. Cagliari defender Diego Godin is positive with the coronavirus and midfield stalwart Nahitan Nandez will also have to sit out the game for precautionary measures after returning from Uruguay. Atalanta visits promoted Spezia looking to get a boost from Josip Ilicic, who recently scored his first goal since March. Ilicic’s stoppage-time winner was decisive in Slovenia’s 2-1 victory over Kosovo. He hadn’t found the net since the Champions League round of 16 when he scored all four of Atalanta’s goals in the win over Valencia. Ilicic then reportedly went into depression after contracting COVID-19. He sat out when Italian soccer resumed in June. Lazio visits Crotone hoping striker Ciro Immobile is cleared to play after missing three Italy matches with the virus.

The buildup to the Bundesliga eighth round has been dominated by Borussia Dortmund forward Youssoufa Moukoko’s potential arrival. Moukoko turned 16 on Friday, making him eligible to play in Germany’s top division, and the youngster could even make his debut on Saturday at Hertha Berlin. Moukoko had already outgrown the youth leagues, scoring more goals than games no matter what level. This season he scored a hat trick at least in each of his four games for Dortmund Under-19s. He was playing with the under-17s when he was 12 and joined the under-19s when he was 14. League authorities were prompted to lower the limit from 17 to 16 for him to play in the Bundesliga last April, meaning it’s just a matter of when Moukoko becomes its youngest player. Dortmund needs a win to keep the pressure on league leader Bayern Munich, which hosts Werder Bremen. Dortmund is already three points off the pace after losing to Bayern in its previous game. Second-placed Leipzig is two points behind Bayern ahead of its trip to Eintracht Frankfurt. Unbeaten Bayer Leverkusen visits promoted Arminia Bielefeld, and Schalke will aim to end its long run without a win against Wolfsburg, the only other team yet to lose this season.

With Marseille's home game against Nice called off because of an outbreak of coronavirus cases in Nice's squad, the day's only game sees Brest facing struggling Saint-Etienne. After riding high with 10 points from the first four games, coach Claude Puel's Saint-Etienne side is in freefall and trying to avoid a seventh straight league defeat. Puel has at least been boosted by the return of veteran captain Mathieu Debuchy after several weeks out with injury.