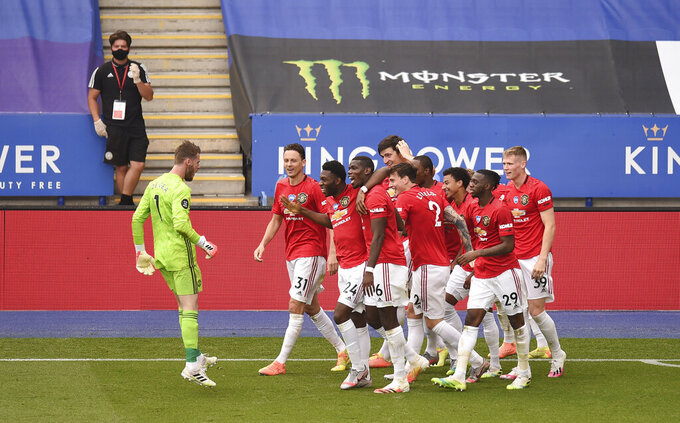 A look at what’s happening around European soccer on Wednesday with the resumption of the Europa League's round of 16:

Since these teams last met, Basaksehir won the Turkish Super League for the first time by completing the domestic season with five wins from eight games. Having been in regular action since mid-May, Copenhagen should be in good shape. The Danish side is second in the Superliga, having won its last two games.

The pressure of winning the Europa League to seal Champions League qualification has been lifted from Manchester United thanks to a fine end to the season that produced a third-place finish in the Premier League. So Ole Gunnar Solskjaer can turn his attention to winning his first trophy since returning to United as manager in 2018. With such a strong lead, the manager is likely to rest some key players as he eyes the last eight tournament in Germany. LASK Linz has not played a domestic fixture since early July and lost its last three games.

Wolfsburg had a mixed time following the resumption of the Bundesliga in May, winning just four of its nine games to finish in seventh position. The domestic season finished at the end of June. Shakhtar Donetsk has been in competitive action more recently, wrapping up the Ukrainian league title last month.

This is a one-off match in the German city of Gelsenkirchen as the teams never managed to play the first leg in March. Inter ended Serie A strongly, unbeaten in eight games and finishing with three successive wins to seal second spot. Getafe finished its La Liga campaign with no wins and four losses from its final six games.

The remaining round of 16 games are played on Thursday. Bayer Leverkusen leads Rangers 3-1, Basel leads Eintracht Frankfurt 3-0 and Wolverhampton is level at 1-1 with Olympiakos. Roma and Sevilla play a one-off game in Germany.