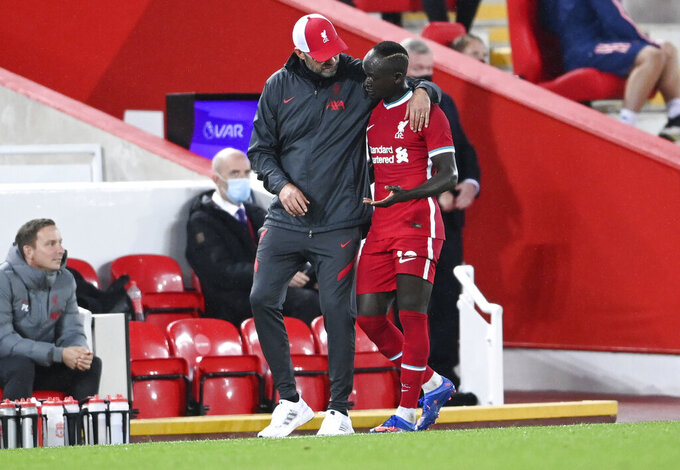 Liverpool's preparations for a trip to Aston Villa in the Premier League have been complicated by Sadio Mane following Thiago Alcantara in contracting the coronavirus and having to self-isolate. Mane has scored three goals at the start of Liverpool's Premier League title defense that has seen all three games won. Tottenham's squad has been stretched to the limit by a heavy workload. Jose Mourinho’s trip to former club Manchester United marks the end of a grueling run of seven games in 22 days and four in eight as Tottenham competes in three competitions. Mourinho has managed to bolster his squad with the loan signings of striker Carlos Vinicius the latest addition. Midfielder Donny van de Beek has been United's only addition of the summer transfer window which closes on Monday for international signings. The day of six games opens with Leicester chasing a fourth straight win at the start of the season at home to West Ham. A week after collecting its first point since gaining promotion, West Bromwich Albion is away in its fourth game at a Southampton side fresh from its first win. Fulham, which plays at Wolverhampton Wanderers, has not only lost all three Premier League games so far but been knocked out of the League Cup by second-tier side Brentford. Sheffield United is also without a point as it heads to Arsenal but has defender John Egan back from suspension and striker Rhian Brewster has joined from Liverpool.

Barcelona plays against Europa League winner Sevilla at the Camp Nou Stadium with the spotlight on teenager Ansu Fati after he started the season with three goals in his first two matches with the Catalan club. Like Barcelona, Sevilla also won its first two Spanish league games. Real Madrid visits Levante looking for its third win in a row. Coach Zinedine Zidane still won't be able to count on Eden Hazard, who is yet to make his season debut because of injuries.

There is doubt over whether Sunday’s main match between defending champion Juventus and Napoli will go ahead. Napoli did not depart as scheduled for Turin on Saturday evening after two players tested positive for coronavirus but Juventus and the Italian league’s governing body say the match is going ahead. Earlier, title hopeful Inter Milan visits Lazio, which is still reeling from a 4-1 defeat to Atalanta. Atalanta hosts Cagliari. Also, it’s: AC Milan vs. Spezia; Benevento vs. Bologna; and Parma vs. Hellas Verona.

Bayern Munich aims to get over its first defeat in 32 games across all competitions with a win against Hertha Berlin in the Bundesliga. Bayern’s busy schedule finally took its toll last weekend when Hansi Flick’s team slumped to a 4-1 defeat at Hoffenheim. The side rebounded with a 3-2 win over Borussia Dortmund in the German Supercup on Wednesday. Hertha returns to Munich after drawing 2-2 at Bayern last season. Bruno Labbadia’s team also hopes to recover from a 3-1 loss at home to Eintracht Frankfurt last weekend. Wolfsburg hosts Augsburg in the early game, hopeful of denying the visitors their third win from three games.