Mayfield: Browns 'in our playoffs, just one week early' 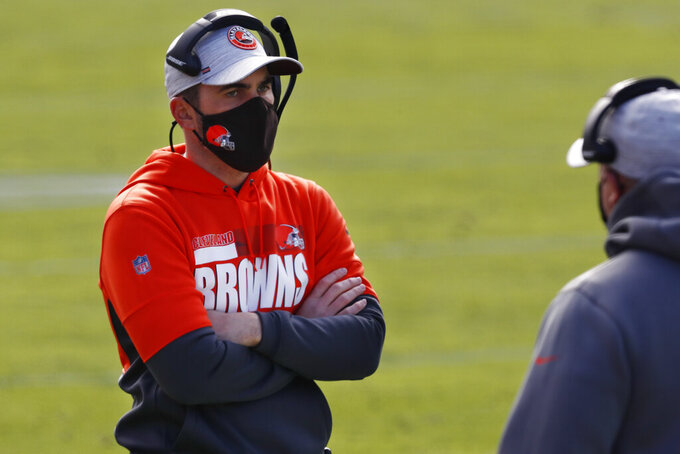 FILE - In this Dec. 6, 2020, file photo, Cleveland Browns head coach Kevin Stefanski watches from the sideline before an NFL football game against the Tennessee Titans in Nashville, Tenn. A steady demeanor, openness and disciplinary ways have marked Stefanski as perhaps, finally, the right man. He's taken a roster of varied personalities and, so far, melded them into a successful unit. (AP Photo/Wade Payne, File)

CLEVELAND (AP) — Baker Mayfield spent time in Zoom meetings, checked his phone frequently and waited for word on when to report for practice.

In 2020, that's considered a normal Wednesday for an NFL player.

However, this is anything but a normal week for the Browns.

With a win-and-make-the-playoffs matchup against Pittsburgh looming, Cleveland closed its facility and delayed practice for several hours after the Browns had two more positive COVID-19 tests — including one for an assistant coach — and their schedule disrupted.

But Mayfield, whose fumbles last week in a loss to the New York Jets prevented Cleveland from clinching a wild-card spot, said the team was unfazed by the upheaval.

And as far as he's concerned, the Browns are already in postseason mode.

“We are in our playoffs, just one week early,” he said. “It is win or go home. That is the mentality for our guys. We have the talent and we have the scheme. We just have to go out there, execute it and do our jobs. We know when we have success and when we have had success this year that has been the case.”

It's been a rough few days for the Browns, who have nine players currently on the COVID-19 reserve list as they try to make the postseason for the first time since 2002.

Last week, the Browns learned they would be without their top four receivers just hours before kickoff against the Jets. All are eligible to return Thursday — as long as they test negative.

The latest player to test positive has not been identified, but coach Kevin Stefanski said he's on the practice squad. Stefanski also did not reveal which of his staff members may have to miss the season finale against the Steelers (12-3).

After learning of the positive tests, the team shut down its Berea, Ohio, headquarters to do contact tracing and Stefanski said players held their position meetings virtually — something that has been standard for eight months.

“These days can be pretty exhausting,” Mayfield said. "We can’t do anything about it so there is no reason to complain. You roll with the punches and have to deal with it. We are not the only ones having to deal with adjustments.”

With the Browns having an uptick in cases, the NFL is monitoring to determine whether Sunday's game needs to be moved.

“We will follow the medical guidance,” said Dawn Aponte, the league's chief football administrative officer. "At this moment we are planning to play on schedule and will take it from there. As always we try to remain flexible and adaptable, and everything remains on the table. As we continue to get the info, we will address it and assess it accordingly.”

The Browns re-opened their facility at 3:30 p.m. and began practice an hour later inside the team's field house.

Goodson, whose positive test was followed last week by numerous players being ruled out of the game against the Jets because of close contact with him, will miss the Steelers game, as will Sendejo.

Dr. Allen Sills, the NFL’s chief medical officer, said the league is investigating the rise in cases on the Browns.

“To date we don’t see any evidence of transmission within the facility,” he said. “I don’t think it would come as a surprise for a positive test in that market. The county that the Browns play in is one of the highest for incident rates in the country.”

For Stefanski, chaos has become the norm as the Browns (10-5) have been among the teams hit hardest by the virus.

“That is 2020,” he said. “We are all prepared to adapt as necessary, really just take this thing day by day and figure out a way to make sure that we are getting our work in.”

Stefanski said rookie left tackle Jedrick Wills, who was held out Sunday with COVID-19-like symptoms, could be back this week but he doesn't know when. Wills was briefly on the reserve list last week before being activated and then getting sick.

Joseph and Bryant can return for Sunday's game if they continue to test negative.

The Browns did have some positive developments that had nothing to do with tests.

Starting right guard Wyatt Teller practiced after missing two games with a sprained ankle. Teller's return should boost a Cleveland running game that hasn't been the same without him.

Also, safety Ronnie Harrison was activated after missing four games with a shoulder injury suffered while making a tackle at Jacksonville on Nov. 29.