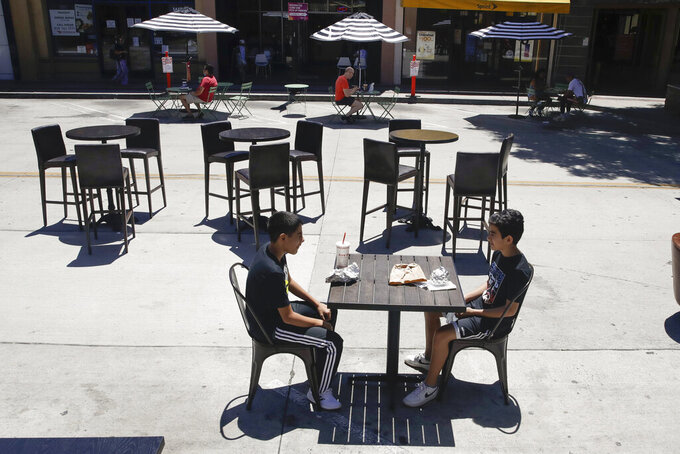 Young patrons eat a meal on a table set on a closed-off street Saturday, July 18, 2020, in Burbank, Calif. The city of Burbank has closed off some streets in the downtown district to allow restaurants to expand their outdoor seating arrangements amid the coronavirus pandemic. (AP Photo/Marcio Jose Sanchez)

LOS ANGELES (AP) — Mayor Eric Garcetti conceded Sunday that Los Angeles reopened too quickly and again warned that the city was “on the brink” of new shutdown orders as the coronavirus continues to surge in California.

Appearing on CNN, Garcetti was asked about a Los Angeles Times editorial that criticized the rapid reopening of California, which was followed by a spike in new COVID-19 cases and hospitalizations.

“I do agree those things happened too quickly,” Garcetti said, adding that the decisions were made at the state and county levels, not by city officials.

The mayor said Los Angeles was “on the brink” of new widespread stay-at-home orders as LA County, with a quarter of California's population, continued to see the state's largest increase in confirmed coronavirus cases.

California reported on Saturday its fourth-highest daily total of newly confirmed coronavirus cases, with more than 9,000. The state also reported an additional 120 deaths.

Last week Garcetti said he wouldn't hesitate to again shut down all but essential businesses. Those comments came days after California Gov. Gavin Newsom shut bars and indoor dining statewide, and ordered closures of hair salons, gyms, malls and other indoor businesses in Los Angeles and other counties experiencing the most significant surge of virus cases.

Los Angeles County reported a record-high number of COVID-19 patients in its hospitals last week, and the overall share of tests that have come back positive jumped from 8% to nearly 10%.

The mayor attributed the increase in spread not just to the reopenings, but also to people becoming less vigilant about following public health guidance and gathering with others outside their households.

“It’s not just what’s open and closed,” he said. “It’s also about what we do individually.”

Officials have reiterated that people must wear masks and maintain social distancing to slow the spread.

In other news about the outbreak in California:

— Officials said a rare but serious and potentially deadly inflammatory syndrome believed to be associated with the coronavirus has been identified in 15 children in Los Angeles County. Multi-system inflammatory syndrome in children, or MIS-C, can cause different parts of the body to become inflamed. Symptoms include fever, vomiting, diarrhea, neck pain, rash, bloodshot eyes and exhaustion. Of the children, 73% were Latino, representing a disproportionate burden for the ethnic group, the Los Angeles Times reported.

— Merced County in central California has not conducted contact tracing for weeks, according to the Merced Sun-Star. Kristyn Sullivan, the county’s supervising epidemiologist, said the county is now only doing case investigations — reaching out to infected people to tell them to quarantine, but not asking about their close contacts or all the places they’ve been recently. She said that interviewing people about their contacts has become ineffective because there are too many cases. CalMatters reached out to 27 California counties with rising infections to ask about their extent of contact tracing. Merced was the only one that confirmed in June that it was no longer conducting it at all, although six did not respond. The other 21 said they were tracing most people or at least some.

— Napa County north of San Francisco will start fining people who don't wear masks from $25 to $500. County supervisors last week passed an ordinance that would also impose fines of up to $5,000 for businesses that receive repeated complaints of people not wearing face coverings. The citations are a last resort only for repeat offenders and will be issued by code enforcement employees, not law enforcement officers, KPIX-TV reported.