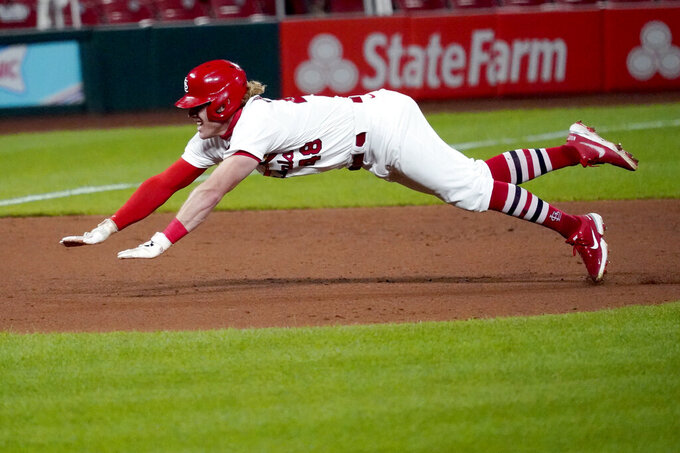 St. Louis Cardinals' Harrison Bader dives into third for a triple during the ninth inning of a baseball game against the Kansas City Royals Tuesday, Aug. 25, 2020, in St. Louis. (AP Photo/Jeff Roberson)

ST. LOUIS (AP) — Ryan McBroom had two hits and drove in the winning run with a single in the eighth inning, Ryan O’Hearn added a solo homer, and the Kansas City Royals beat the St. Louis Cardinals 5-4 on Tuesday night.

In the eighth, Hunter Dozier reached on an infield single to lead off. With two outs, McBroom singled to left, scoring Dozier for the winning run.

“Every chance this team has to take that next step," said Matheny, who used to manage the Cardinals. “I’m just happy to be walking out of here with a win.”

Josh Staumont (1-1) pitched one inning of relief to earn his first major league win. Trevor Rosenthal pitched the ninth, earning his seventh save in seven opportunities. Rosenthal gave up a one-out triple and then hit a batter before getting out of the jam.

In his six years with St. Louis, Rosenthal recorded 65 saves at Busch Stadium. The Cardinals were the only team Rosenthal had yet to face in his career.

St. Louis gambled in the eighth, sending Paul DeJong home on a double to left center by Yadier Molina, but DeJong was out easily at the plate.

“It didn't work out,” St. Louis manager Mike Shildt said. “That's baseball. I've got no problem with Jose (Oquendo) sending him home. I trust his experience. He's one of the best third base coaches in the game. He took a shot. I have no real major issue with it.”

O’Hearn, who also had two singles, tied the game 4-4 with a leadoff homer in the sixth off St. Louis starter Adam Wainwright. In his 320th career start, Wainwright went seven innings. It also marked the 268th time Wainwright and Molina were a starting battery. That puts the duo in seventh place, two games behind Montreal’s Steve Rogers and Gary Carter.

The 31-year-old Harvey was making his second start for the Royals and lasted 2 2/3 innings. The former Mets right-hander, who had Tommy John surgery in 2015, has a 9.00 ERA covering 5 2/3 innings this season.

“To get taken out after two or three innings, that’s not the starter’s job, so that’s frustrating for me,” Harvey said. “It’s just a matter of getting through that tough part, getting into a pressure situation and being able to get through that.”

Kansas City led 2-0 after McBroom drove in a run on a fielder’s choice in the second and O’Hearn singled home a run in the third.

“That was the big run there,” Wainwright said about the run in the third. “Giving up a run with two out and nobody on. That's pretty hard to swallow. You can give up free passes. Good hitters make you pay for your mistakes.”

The Royals added a run in the fifth when Cam Gallagher scored on a throwing error by Edman on an infield single by Whit Merrifield to cut the lead to 4-3.

THESE SPIKES ARE MADE FOR WALKING

Paul Goldschmidt walked for a personal-best 10th conseuctive game. He then scored in the third on an infield single by DeJong.

The Royals added RHP Jake Newberry on Tuesday. Rookie RHP Tyler Zuber was placed on the bereavement list following the death of his grandmother.

Royals: LHP Danny Duffy will not make his scheduled start Wednesday because of left forearm fatigue.

Cardinals: OF Austin Dean and OF Lane Thomas have been cleared to go to Springfield, Missouri, and take part in a rehab assignment at the alternate training site. They were the last two players of the 10 Cardinals placed on the COVID-19 injured list to clear MLB protocols.

Royals: RHP Jakob Junis (0-0, 4.00) is making his first start since Aug. 2 and his third start this season. The Royals will have to make a roster move prior to Wednesday’s game to make room for Junis, who was eligible to come off the injured list (back spasms) on Sunday before they activate him.

Cardinals: Dakota Hudson (0-2, 3.46) allowed just one hit and two walks over 4 2/3 scoreless innings against Cincinnati, while striking out six in his last outing. He made one career appearance in relief at Kansas City in 2018.