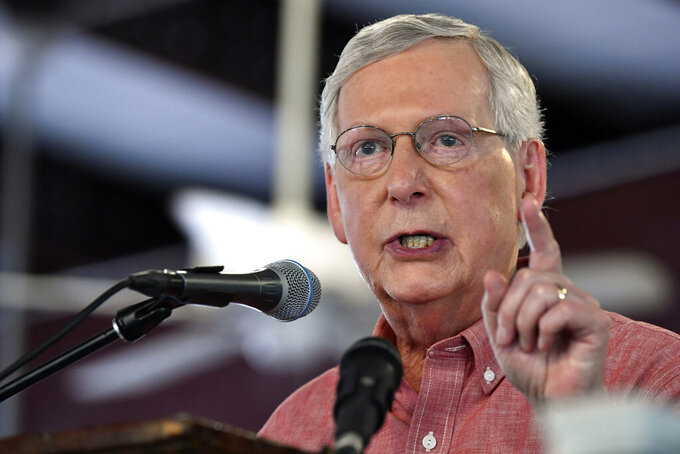 FILE - In this Aug. 3, 2019, file photo, Senate Majority Leader Mitch McConnell, R-Ky., addresses the audience gathered at the Fancy Farm Picnic in Fancy Farm, Ky. Ex-Marine pilot Amy McGrath, who seemed to be gliding toward a primary victory in Kentucky, has come under heavy fire from both directions in the closing days of the Democratic contest to determine who challenges Republican Senate Majority Leader Mitch McConnell in the fall. (AP Photo/Timothy D. Easley, File)

FRANKFORT, Ky. (AP) — Presidential primaries topped the ballot Tuesday, but there were several others races being decided in Kentucky including party nominations for a U.S. Senate seat. Other contested races on the ballot include five U.S. House seats, 11 contested legislative primaries and a Kentucky Supreme Court seat. With thousands of absentee ballots uncounted, many races remained undecided. Here’s a summary of the state offices and candidates on the ballot:

Republicans: Senate Republican leader Mitch McConnell easily won his party’s nomination in Kentucky in his bid for a seventh term. McConnell has positioned himself as President Donald Trump’s most crucial congressional ally and worked closely with Trump on cutting taxes and putting conservatives on the federal bench. He faced only token opposition from a group of Republican challengers in the Bluegrass State’s primary Tuesday. In an unprecedented move, the state allowed widespread absentee mail-in voting because of the coronavirus pandemic. It might be days before McConnell knows who his Democratic opponent will be in the fall.

The self-described “pro-life, pro-gun, pro-Trump” candidate, has represented the 2nd District since 2008. In November, Guthrie will face Democratic nominee Hank Linderman, a musician, for the second time. In 2018, Guthrie beat Linderman with over two-thirds of the vote.

The primary was the congressman’s first competitive primary since his first bid for the office in 2012.

President Trump labeled Massie “a disaster for America” when the congressman held up a vote on a $2 trillion coronavirus relief package in March. Massie, who is known as “Mr. No” for habitually voting down both bipartisan and conservative legislation, is likely to win the heavily conservative district in November. He won two-thirds of the vote in 2018.

Rogers defeated Gerardo Serrano, a firearms enthusiast from Jackson County, for the second time, after previously facing off against him in 2018. Rogers is Kentucky’s longest-serving Republican in Congress, having represented the state’s 5th District since 1981. He currently serves as the dean of Kentucky’s congressional delegation.

6th District: Andy Barr, who recently dealt with the unexpected death of his wife, secured the Republican nomination Tuesday night for Kentucky’s 6th Congressional District in his fifth bid for the seat. Barr will face the winner of the Democratic primary between Josh Hicks and Daniel Kemph in November in a district known to swing both red and blue. Barr narrowly held off Democrat and former fighter pilot Amy McGrath in 2018 by 3.2 points.

Because of the coronavirus pandemic, all state registered voters were deemed eligible to submit an absentee ballot, which had to be postmarked by June 23. Some counties have said they won't post results on election night but will announce them by June 30. A limited number of polling places were open for voters who wanted to cast ballots early or on Election Day.