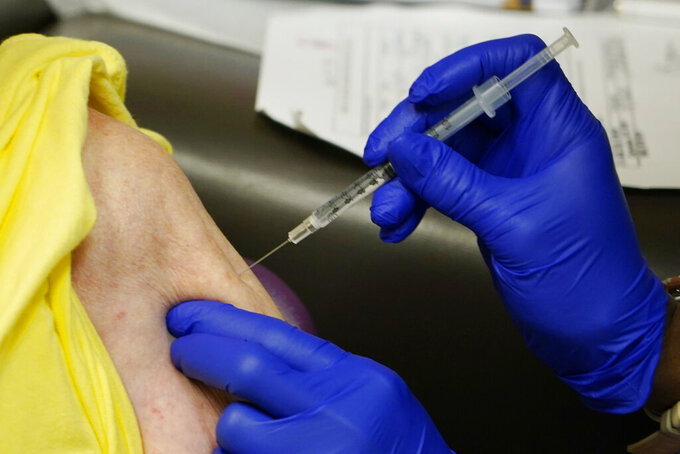 In this April 7, 2021 photo, a senior receives the Johnson & Johnson COVID-19 vaccine at the Aaron E. Henry Community Health Service Center, in Clarksdale, Miss. Medicare will require nursing homes to report COVID-19 vaccination rates for residents and staff, the government said Tuesday, in what officials hope will become an incentive to keep giving shots even as the worst ravages of the pandemic ease in facilities across the land.(AP Photo/Rogelio V. Solis)

WASHINGTON (AP) — Medicare will require nursing homes to report COVID-19 vaccination rates for residents and staff, the government said Tuesday. Officials hope to nudge facilities to keep giving shots as the worst ravages of the pandemic ease, but the danger of a rebound still lurks.

“We’re hoping to drive increased vaccination rates among residents and staff, as well as transparency for residents and their families," Dr. Lee Fleisher, chief medical officer at the Centers for Medicare and Medicaid Services, told The Associated Press.

Medicare's move to sustain the pace of vaccinations comes as an initial effort to get shots to nursing homes across the country has wound down. That partnership between the government and retail pharmacy giants CVS and Walgreens is being succeeded by an ongoing collaboration with specialized long-term care pharmacies that cater to the needs of the nursing home industry. Assisted living facilities and other care centers serving older people can also participate.

A smooth transition will be critical because the coronavirus is far from eradicated, even as new residents are being admitted to long-term care facilities and staffing ebbs and flows.

People living in long-term care facilities have borne a heavy toll from the pandemic. They represent about 1% of the U.S. population but accounted for roughly 1 in 3 deaths, according to previous estimates from the COVID Tracking Project.

“This is an important development that is months overdue,” said David Grabowski, a Harvard health policy professor who has tracked the industry's struggles with the outbreak. “Many of us argued that this information should have been published starting in December when the federal long-term care vaccination effort began.”

Nursing homes will now be required to submit weekly vaccination numbers for residents and staff to the Centers for Disease Control and Prevention. That requirement will take effect within two weeks. Medicare officials say it may take two to four more weeks after that for the data to start flowing. The plan is to post facility-level information on the internet so residents and families can easily access the details from Medicare's “Compare Care” website.

“Residents of nursing homes and their families have every right to this basic information,” said Sen. Bob Casey, D-Pa., part of a bipartisan group urging the change.

Fleisher said the agency will also gain greater insight into levels of vaccination across the entire industry. That would let health officials direct vaccines and support services to nursing homes lagging behind.

For example, a new AP analysis of nursing homes in New York found that rates of vaccination have been far from even across the state. Overall, 79% of residents were fully vaccinated, as well as 55% of staff. But in Brooklyn, the corresponding vaccination rates were 63% for residents and 40% for staff. New York facilities reported 782 infections among staff and residents in the 14 days ending April 25, the most in the nation.

Academic researchers believe that the virus most likely entered nursing homes through staffers who were infected in their communities and became unwitting carriers. Many aides in the low-wage industry work shifts in different facilities.

Nursing homes are now required to report COVID-19 cases and deaths but not vaccinations. A relatively small number of facilities provide the data voluntarily to the government.

“Publicizing this information will hopefully encourage facilities and policymakers to continue efforts to vaccinate staff and residents,” Grabowski said. “Many staff were initially hesitant about the vaccine, and new staff and residents also need to be vaccinated. There is still a lot of work left to do.”

Cases and deaths plummeted after the government launched a concerted effort to vaccinate residents and staff. The CDC reports that nearly 2.9 million nursing home residents and staffers are fully vaccinated. Nursing homes and other long-term care facilities have opened up family visits again after spending a year in lockdown.

Nursing homes are already required to report rates of flu vaccination. But until the new requirements were issued Tuesday, there was no similar requirement for COVID-19 vaccines even though disease from the coronavirus is far more lethal.

The main nursing home industry trade group, the American Health Care Association, says that it supports public reporting of vaccination data but that it shouldn't just apply to them. Hospitals, home health agencies and other providers should also be required to post their numbers. Results should not be used to “judge” nursing homes with low vaccine rates, the group said, but to help them improve.